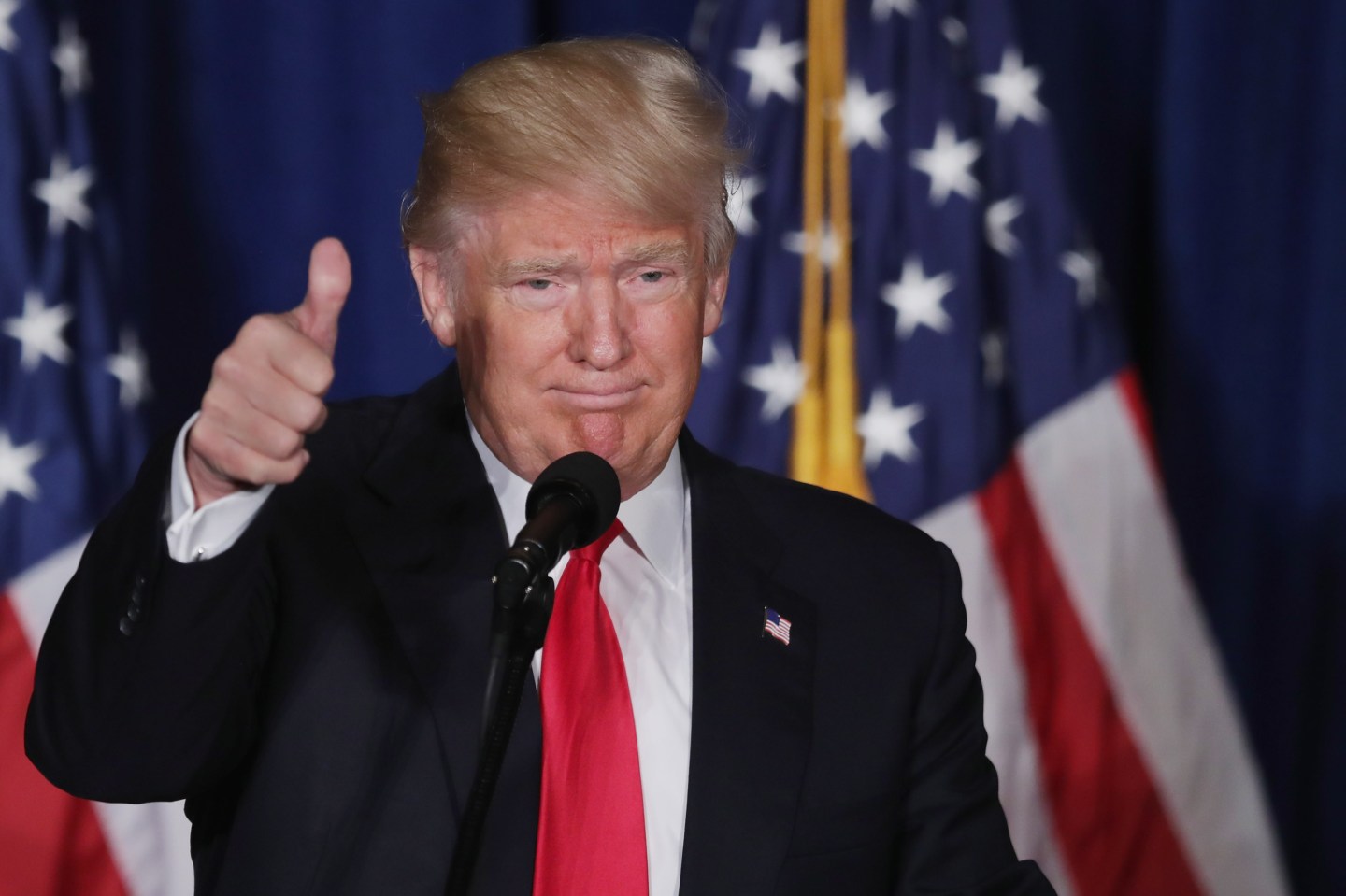 In the wake of the 2016 election, it might seem cavalier to shrug off a tweet from President-elect Donald Trump, but that’s what Boeing investors did today.

Boeing’s stock dipped 1% following an early morning tweet from Trump claiming the cost of new Air Force One planes would exceed $4 billion. Calling those costs “out of order,” Trump raised the prospect of nixing the deal. He later told reporters, “I think Boeing is doing a little bit of a number. We want Boeing to make a lot of money, but not that much money.”

By the afternoon, Boeing’s stock was back in the black in a day of sluggish trading. Investors seemed content to wait to for more clarity on the President-elect’s intentions. As TIME’s Zeke Miller noted, Trump’s team didn’t back up the $4 billion figure and that the tweet may be “a time-honored ploy to demonstrate a desire to cut costs in the bloated Defense Department.”

For now, it’s not clear how hard a blow the loss of the Air Force One contract would be for Boeing, if the blow comes at all. Boeing spokesperson Todd Blecher said the company is “currently on contracts totaling approximately $170 million for the initial design and engineering work” needed before production.

U.S. presidents have been shuttling around on specially-designed aircraft ever since Franklin D. Roosevelt boarded a plane nicknamed the “Sacred Cow” in 1944. The manufacturer of that plane is now part of the Boeing family. The current Air Force One aircraft, however, were manufactured in 1990 and are approaching their planned 30-year service life.

In January, the Air Force selected Boeing to manufacture three new Air Force Ones based on its 747-8 jets, outfitting them with features like secure communications, defensive capabilities, in-flight refueling, a presidential suite, accommodations for guests and the Secret Service, a medical room, and two galleys that can serve 100 meals. The planes won’t be ready until 2024 or later, which may be why Trump’s tweet pointed out they would be used by “future presidents.”

Should the order be canceled, the Air Force is left with tough choices. The only other four-engine plane that could meet its requirements for Air Force One is made by France’s Airbus, which declined to make a proposal in 2013. As for Boeing, the impact would be limited. Boeing’s 747-8 planes are priced around $379 million apiece. Bloomberg reported that the Pentagon is budgeting $3.2 billion for R&D and production of Air Force One planes. Spread out over several years, that would amount to a small fraction of Boeing’s $96 billion in annual revenue.

The bigger impact for Boeing and other companies may come if a Trump Administration clamps down on defense spending. Defense projects make up less than a third of Boeing’s total revenue and have been flat for the past few years. The bulk of Boeing’s revenue comes from commercial airplanes, which have been a greater source of concern for investors in 2016.

After rising 10% in 2015, Boeing’s commercial airliner revenue fell 2.2% during the first nine months of 2016 to $49 billion. Operating earnings at the division fell 64% to $1.7 billion. Analysts have cited a number of reasons, such as slack demand for wide-body planes like Boeing’s 777 and airlines waiting longer before replacing aging planes.

In January, Boeing warned that it would deliver around 745 planes this year, below the record of 762 in 2015. So far, the company has delivered 617 planes. The smaller 737 planes accounted for two thirds of those deliveries. The 787 made up another 19%. The more expensive, wider-body aircraft such as the 777 and 747 saw fewer deliveries.

With demand stronger for lower-cost planes, Boeing said earlier this year it would cut 4,500 jobs to rein in costs. The company has recently faced headwinds in other areas, such as United Continental’s decision to defer deliveries of 61 planes and a vote by the House of Representatives to bar the sale of commercial aircraft to Iran. Boeing said in October it had received a license to sell 80 planes to Iran.

Boeing also said in November that it would cut 500 jobs from its defense operations over two years. For now, investor concerns center on its commercial operations. As for trimming costs on defense projects like Air Force One, Boeing says it can handle them efficiently. CEO Dennis Muilenburg has said Boeing’s deal to sell 737’s for the Navy’s P-8 program came in $2 billion under budget.

That kind of budgeting could save Boeing a high-profile deal to keep the U.S. President up in the air, but either way investors have bigger issues with the aerospace giant right now.