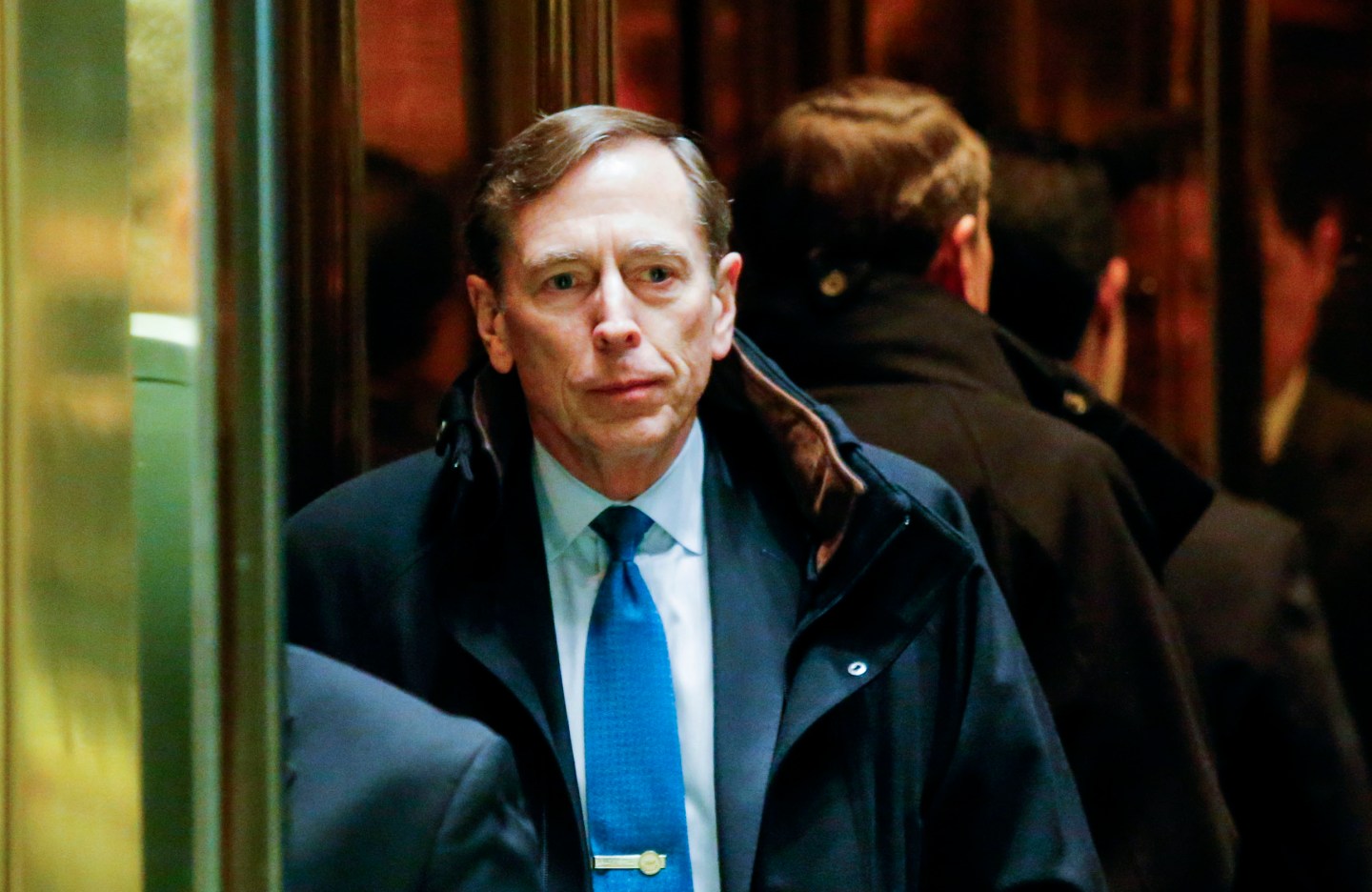 President-elect Donald Trump is expanding his pool of candidates for secretary of state, leaving unclear whether former CIA Director David Petraeus’ guilty plea for leaking classified information disqualifies him to serve as the nation’s top diplomat.

“There’s not a finite list of candidates” for secretary of state, Trump adviser Kellyanne Conway told reporters on Sunday. “More than four. Who knows how many finalists there will be?”

The remark comes a week after Trump’s aides confirmed that the president-elect had settled on four finalists for the post. Two people close to the transition told The Associated Press that Trump is moving away from two of the four: former New York City Mayor Rudy Giuliani and Mitt Romney, the 2012 Republican presidential nominee.

That would leave Petraeus as a contender, along with Tennessee Republican Sen. Bob Corker, chairman of the Senate Foreign Relations Committee. Both people close to the transition said Trump’s prolonged decision-making process has left the door open to other options. Among other possibilities, one official says is Jon Huntsman, a former Republican Utah governor who also served as the ambassador to China and speaks Mandarin.

The people close to the transition spoke on condition of anonymity because they were not authorized to discuss the private process publicly.

There was other evidence that Trump is looking beyond the known four contenders. Vice President-elect Mike Pence on Sunday listed the quartet, but added a fresh reference to former U.N. ambassador “John Bolton or others who may be added to the list” of candidates.

“I think the person who will make the decision about our next secretary of state is the president-elect,” Pence said on ABC. “And he’ll factor the totality of Gen. Petraeus’ career in making that decision.”

Pence also referred to Petraeus as a “hero.” But it seemed unclear Sunday even to Petraeus and Trump’s inner circle whether the retired general’s guilty plea has turned off Trump.

Petraeus, a retired four-star general, pleaded guilty last year to one misdemeanor charge of mishandling classified information relating to documents he had provided to a woman he was having a sexual relationship with. He was spared prison time under a plea agreement with the Justice Department and was given two years’ probation.

FBI Director James Comey has drawn a distinction between Petraeus’ case and that of Democratic presidential nominee Hillary Clinton by saying there was no evidence that Clinton or her aides had intended to break the law through careless handling of sensitive information. Federal prosecutors said Petraeus knew black binders he shared contained classified information, but he nonetheless provided them.

“I made a mistake. I have again acknowledged it,” Petraeus said Sunday on ABC’s “This Week.” ”Folks will have to factor that in and determine whether that is indeed disqualifying or not.”

The remarks come as Trump struggles to fill one of the most visible and prestigious positions in any presidential administration. The secretary of state will steer Trump’s foreign policy agenda, which the president-elect has said would include renegotiating key trade deals and the pact aimed at keeping Iran from acquiring nuclear weapons. But for all his business acumen, Trump has no experience with government diplomacy. He’s most recently drawn criticism for speaking with Taiwan’s leader that contradicted U.S. practice and prompted a complaint from China.

Petraeus acknowledged that he loaned Paula Broadwell eight binders containing highly classified information regarding war strategy, intelligence capabilities and identities of covert officers. Petraeus kept the binders in an unlocked desk drawer at his home, instead of a secure facility that’s required for handling classified material.

When initially questioned by the FBI, he denied having given Broadwell classified information. Petraeus avoided being charged with making a false statement under his plea deal.

“At the time, I didn’t think it was false,” Petraeus said Sunday.