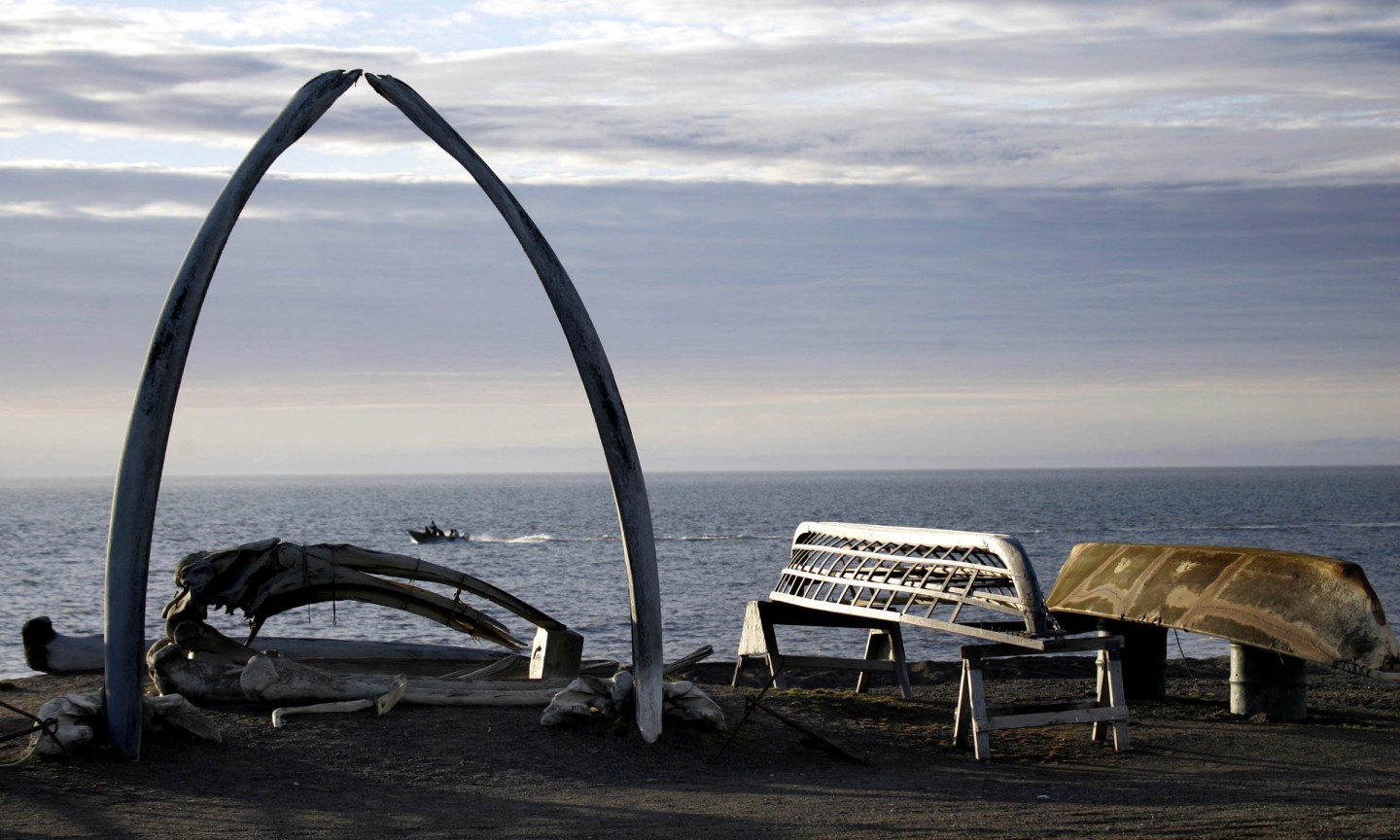 In this Aug. 12, 2005, file photo, a boat drives past a skin boat display near whale bones and an arch made of a whale jaw on the beach in a town that was known as Barrow, Alaska. Residents voted in October to change the name of their city to the Inupiaq name of Utqiagvik. The new name, which became effective on Thursday, Dec. 1, 2016, is being challenged in a lawsuit. (AP Photo/Al Grillo, File)
Al Grillo AP

On paper, the new Inupiat Eskimo name of the nation’s northernmost town is now official. But not so fast. The reality is not so simple.

The town was known as Barrow until Thursday, when the new name, Utqiagvik (oot-GHAR’-vik), became effective, less than two months after the town approved the change at the polls, by a margin of a mere six votes.

But the name is being challenged. A local Alaska Native corporation filed a civil lawsuit Wednesday that claims city officials rushed the process with insufficient outreach to the public. Plaintiffs also maintain the new name isn’t even the area’s traditional place name, and they also note the name change would come at a steep cost to the city in public expenditures to change signs, contracts and other documents to reflect the new name.

And on Tuesday, Mayor Fannie Suvlu introduced an ordinance to consider asking voters if the new name should be repealed. The City Council will address the proposal in January. She said Friday the ordinance was prompted by several factors, including the tight vote and claims by “more than a handful of community members” in the town of 5,000 that there was no due process before the October vote.

The 381-375 vote happened before Suvlu came into office.

The lawsuit was filed by the Ukpeagvik Inupiat Corp., which also was seeking a temporary restraining order and preliminary injunction to prevent the city from changing the name.

A state judge, however, denied that motion on Thursday, ruling that the city did not receive notice of it until that morning and that the plaintiffs also did not show how the city would be “immediately and irreparably injured” by the cost of changing the name. The judge also noted that Lt. Gov. Byron Mallott certified the name change more than a month ago.

Mario Gamboa, a spokesman for the Native corporation, said he was not authorized to discuss the case. He said the only one authorized to speak on the issue is corporation CEO Anthony Edwardsen, who was traveling to Russia on Friday and was not available for comment.

In court documents, plaintiffs say the lack of input from the public led to a flawed law being passed, one that didn’t even use the correct traditional name for the city. They claim the correct word is Ukpeagvik, which means “the place where we hunt snowy owls.”

City Council member Qaiyaan Harcharek, who is Inupiat on his mother’s side, introduced a local ordinance in August that began the process ultimately ratified by voters. Harcharek could not immediately be reached for comment Friday. After the October vote, however, he said Utqiagvik essentially means a place for gathering potatoes.

“We are now in an era where the reclamation of tradition is critical to the perpetuation of identity as Iñupiat,” he wrote in an October email to The Associated Press. “The people of Utqiagvik voted to regain our traditional name. Hopefully, it signifies the beginning of a decolonizing revolution. Regaining our traditional names is just one step towards that healing!”