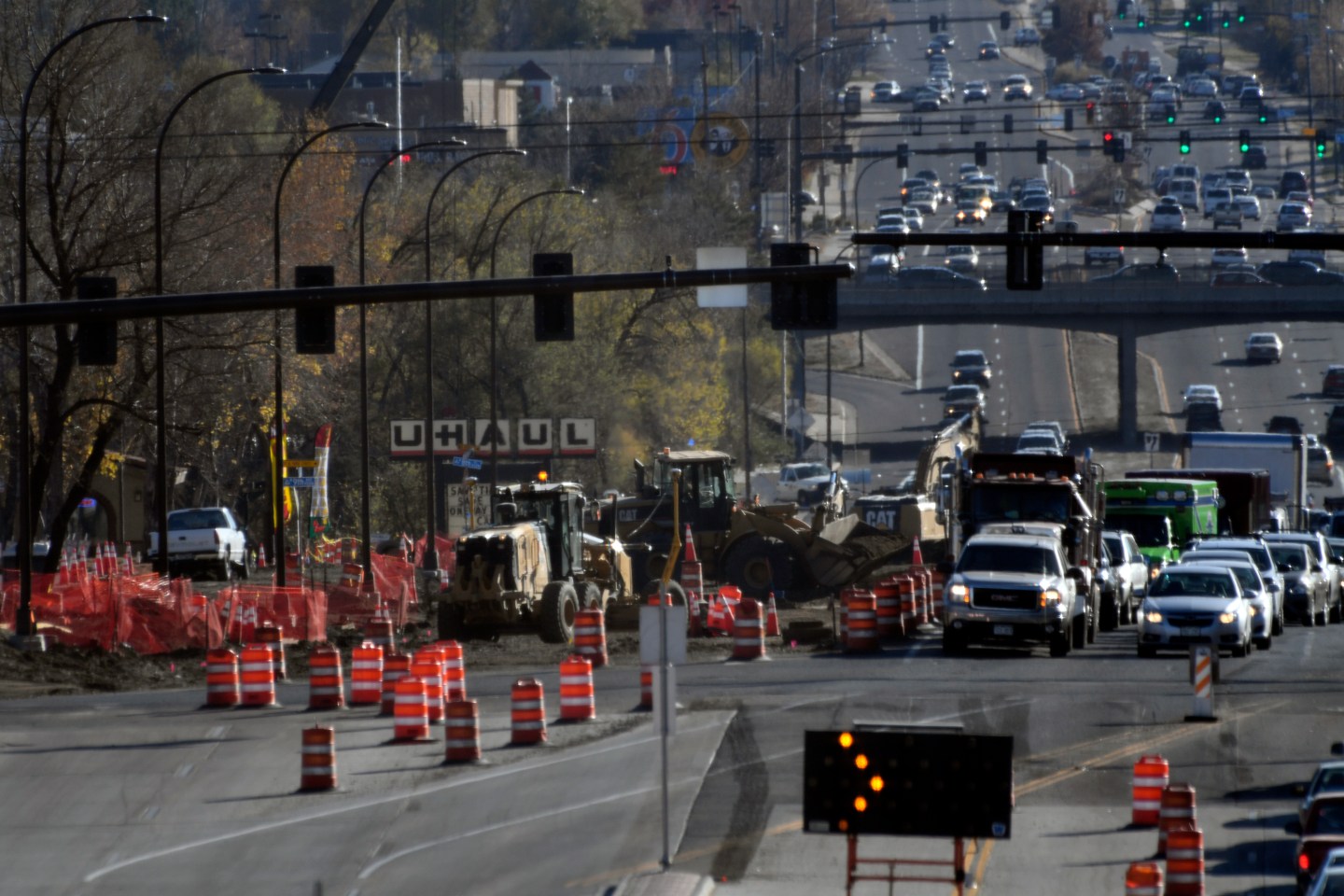 LAKEWOOD, CO - NOVEMBER 11: Construction photos of Wadsworth on 8th avenue November 11, 2016 near the U-Hall business. A potentially groundbreaking case may have been decided by the Colo Supreme Court this fall that got very little coverage by any local media. It involves CDOTs efforts to condemn land along Wadsworth near US 6 for a road widening project. A U-Haul right at that intersection challenged the seizure of its land saying the Transportation Commission is the only body that can condemn land and that it cant delegate that power to CDOT staff. (Photo By John Leyba/The Denver Post via Getty Images)
John Leyba—Denver Post via Getty Images

Since the financial crisis erupted almost a decade ago, the United States has been focused on climbing out of a deep hole. Today we’re back on solid ground, but there is an undercurrent of worry that modest growth is the best we can do.

The United States doesn’t have to settle for lackluster growth. But it does have to get moving. The arrival of a new administration and a new Congress is a fresh chance to find common ground—and the private sector can be the connective tissue that brings both parties together around a new agenda for revving up growth.

At the McKinsey Global Institute, we interviewed dozens of CEOs from multiple industries, and many of them sensed danger as many Americans no longer believe they have a chance to move up the ladder. The message from these business leaders and from our own analysis is that it’s time to focus on building an economy that works for everyone. What’s more, business leaders are eager to roll up their sleeves to tackle the challenge.

Our new research identifies five key priorities that can help shake off stagnation and create more widely shared prosperity. An ocean of ink has already been spilled about topics such as taxes, regulation, entitlements, and debt, but we believe it’s critical to shift the focus onto accelerating growth. We estimate that these five initiatives can collectively raise GDP growth to 3% or even 3.5%—levels not seen since the 1990s.

Two of the biggest opportunities involve harnessing the forces of digital technology and globalization. This is somewhat ironic, since these two forces have deepened many of the disparities we see across the economy. Trade, in particular, has taken a beating of late. But the way to address those who have been left behind is to harness the growth opportunities digitization and globalization bring by getting more small businesses, more workers, and more parts of the country to participate and benefit.

The United States has to reverse its persistent productivity slowdown, and improve the digital capabilities of lagging sectors and firms is an important piece of that puzzle. This effort can go hand-in-hand with encouraging more small firms to pursue opportunities in global markets. Today, fewer than 1% of US companies export, a far lower share than in any other advanced economy. Becoming an exporter was once daunting for small businesses, but the Internet has made borders less formidable. The United States can retool customs requirements and encourage small businesses to take advantage of digital e-commerce platforms to serve overseas customers.

Globalization may have left some regions behind, but deeper engagement with global investors may help them catch up. Over the past decade, the top one-third of US cities captured 55% of all inward foreign direct investment, while the bottom third accounted for only 7%. Many of the regions that lost manufacturing jobs still have experienced workers, technical know-how, and industrial facilities. They are attractive destinations—and connecting them with foreign investors can help them script a second act.

The three remaining priorities in our growth agenda involve putting America’s financial capital, human capital, and natural resources to work more effectively. First, we need to focus on the 80% of the population who live in the nation’s cities or surrounding metro areas. Investing in transportation infrastructure and affordable housing could make a huge difference to their productivity, their disposable income, and their quality of life. Second, the United States needs to build a more responsive labor market with more career paths outside the traditional degree track.

Policy makers and the private sector need to work together to establish more apprenticeships and training programs and to leverage technology solutions to connect people with employment opportunities more efficiently. And finally, the United States can ride a wave of innovation to make the energy sector more productive, speeding the allocation of capital to the most promising opportunities. Making the entire economy more energy-efficient would spur capital investment and create household savings that could spur demand growth.

Bringing these initiatives to fruition requires investing in the future. Raising the currently anemic level of public investment could pay for itself if these initiatives kick-start growth. But that’s not to say the only answer is trillions of taxpayer dollars. Some of these initiatives simply call for modernizing rules, convening, and matchmaking. There is a great deal of private capital on the sidelines, and investors are hungry for opportunities.

In a slow-growth world, everyone is left fighting to protect their slice of a smaller pie. But when the economy returns to firing on all cylinders, income gains tend to be more broad-based. This could go a long way toward healing the nation’s divides.

The current period of slow growth has produced a school of thought that says America’s best days are behind it. We strongly disagree. The United States is still one of the most resilient and innovative economies in the world. Pursuing an ambitious growth strategy and investing wisely could position it to confound the pessimists once again.

Gary Pinkus is managing partner for McKinsey & Company in North America. James Manyika is a director of the McKinsey Global Institute, where Sree Ramaswamy is a senior fellow.