Putin Says Russia Is Ready to Cooperate with America 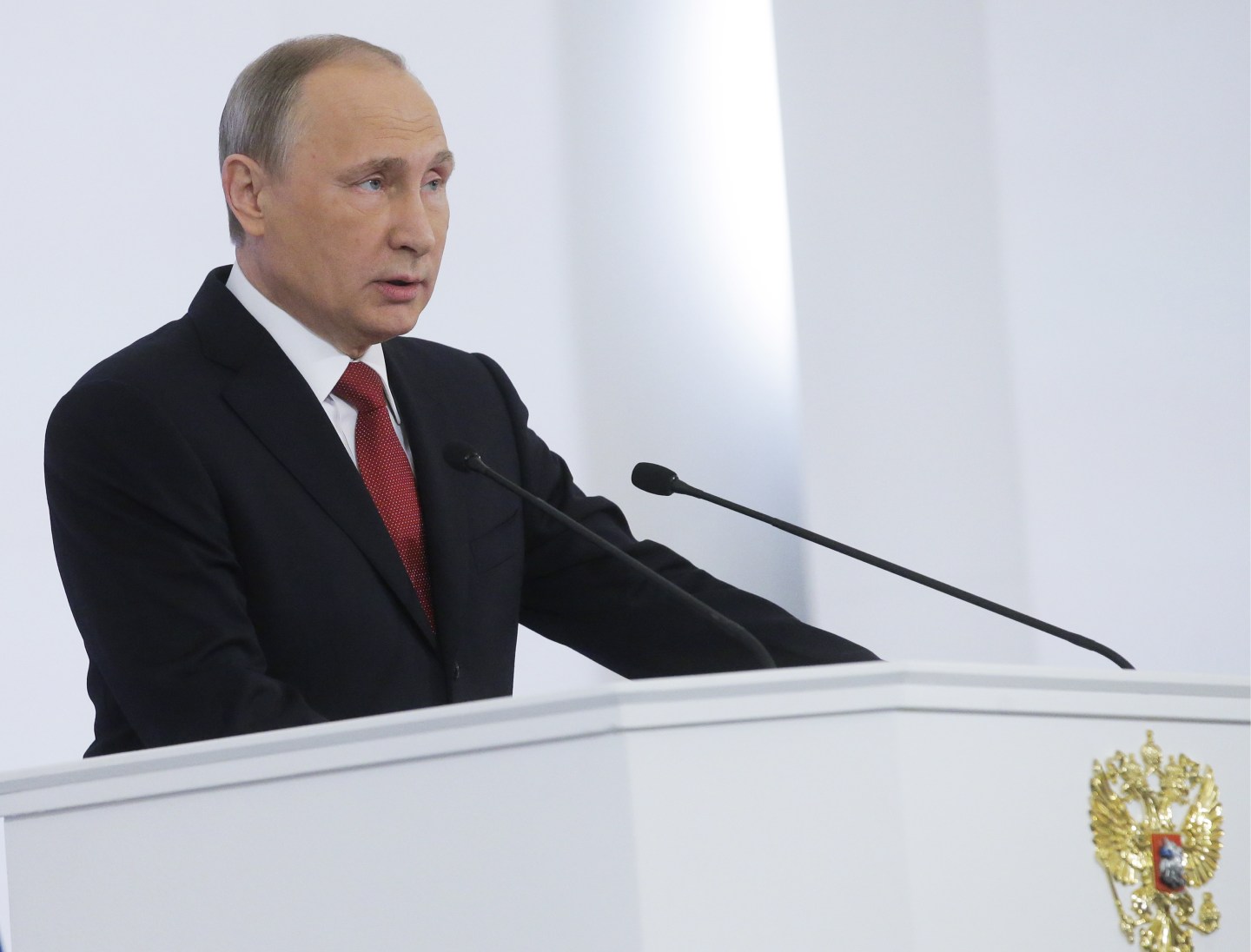 President Vladimir Putin said Thursday that Russia hopes to normalize ties with the U.S. and join efforts in the fight against international terrorism.

Speaking in a live state-of-the-nation address, Putin said that Russia is ready to take part in tackling global challenges if its interests are respected.

“We don’t want confrontation with anyone,” he said in a speech before officials and lawmakers in an ornate, white-marble Kremlin hall.

“Unlike our foreign colleagues who are seeing Russia as an enemy, we have never been looking for enemies, we need friends,” Putin said. “But we won’t allow any infringement on our interests and neglect of them.”

Russia’s relations with the West have plummeted to a post-Cold War low over the Ukrainian crisis and the war in Syria. During the U.S. election campaign, President Barack Obama’s administration accused Russia of hacking American political sites and email accounts in an effort to interfere with the vote. The Kremlin has rejected the accusations.

“In the last few years. we have faced attempts of foreign pressure with all tools involved — from the myths about Russian aggression, (allegations) of meddling in elections to the hounding of our athletes,” Putin said, referring to doping scandals.

Putin said that Russia is looking forward to mending ties with the U.S. after President-elect Donald Trump takes office.

“We are ready for cooperation with the new American administration,” he said. “It’s important to normalize and develop our bilateral ties on an equal and mutually beneficial basis. We share responsibility for ensuring global security and stability and strengthening the non-proliferation regime.”

“Our servicemen in Syria are fulfilling that task,” he said.

Russia has conducted an air campaign in support of Syrian President Bashar Assad, helping his forces make significant gains, most recently in Aleppo, Syria’s largest city before the war.

Putin said that Russia is open to a “friendly and equal dialogue” about global security. He pointed to the European migration crisis as an example of even “seemingly prosperous countries and stable regions” facing new divisions.

In the speech that was mostly focused on economic and social issues, Putin said that the Russian economy is on the way to recovery, pointing at a growth in some sectors of industry and agriculture. He said agricultural exports this year will top $16 billion, exceeding weapons exports.

The Russian economy contracted 3.7 percent in 2015 and the recession has continued this year under the combined blow of low oil prices and Western sanctions.

Putin noted that inflation, which stood at nearly 13 percent last year, is expected to slow down to 6 percent this year.

He said the government should encourage growth by cutting red tape and creating a more favorable business environment.

Putin drew attention to the approaching centennial of Russia’s 1917 revolution as a reminder of the need to secure national unity and accord.

“It’s inadmissible to bring divisions, malice, resentment and bitterness of the past into our life today,” he said.