Here Are the UN’s Harsh New Sanctions on North Korea 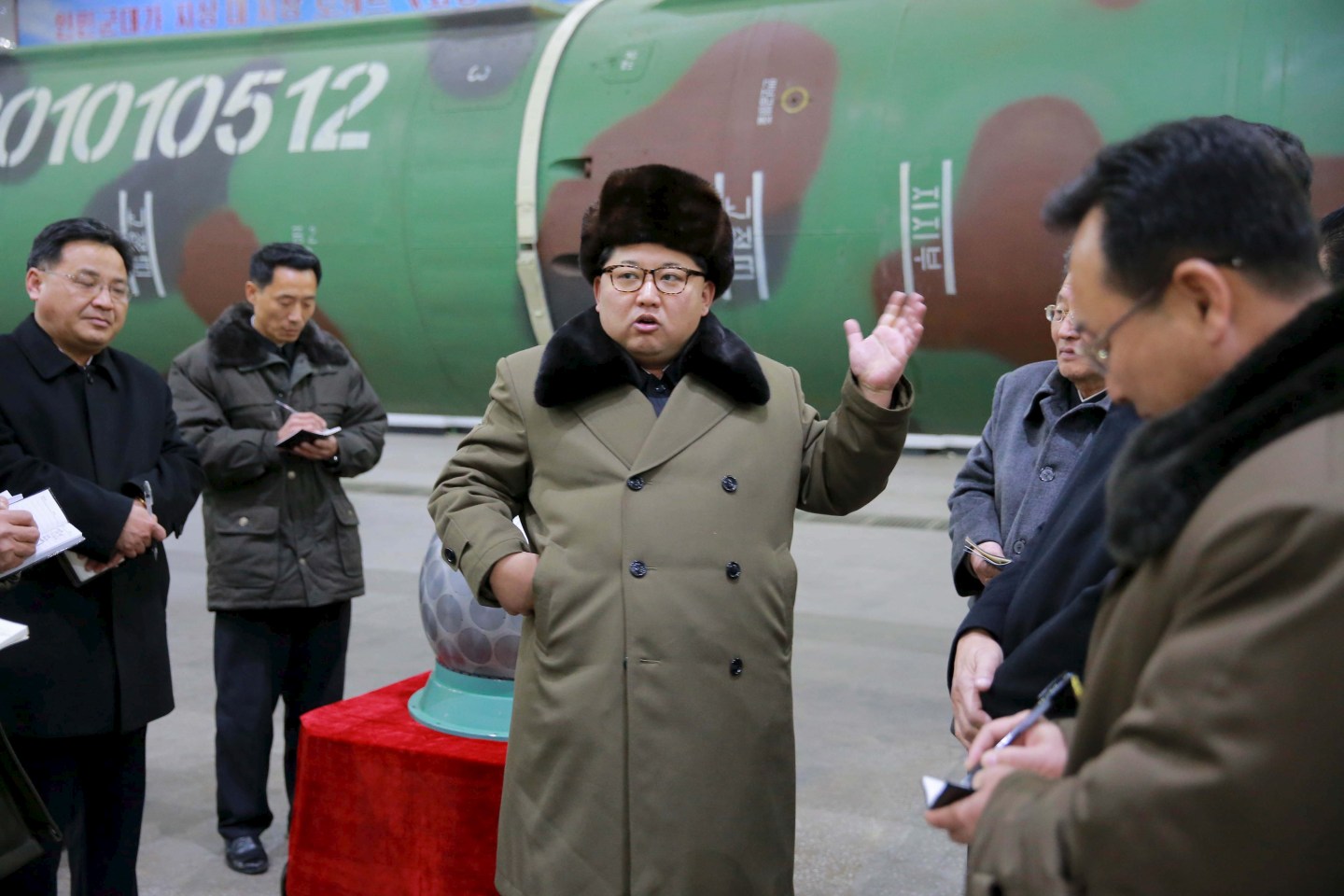 North Korean leader Kim Jong Un meets scientists and technicians in the field of researches into nuclear weapons in this undated photo released by North Korea's Korean Central News Agency (KCNA) in Pyongyang March 9, 2016. REUTERS/KCNA ATTENTION EDITORS - THIS PICTURE WAS PROVIDED BY A THIRD PARTY. REUTERS IS UNABLE TO INDEPENDENTLY VERIFY THE AUTHENTICITY, CONTENT, LOCATION OR DATE OF THIS IMAGE. FOR EDITORIAL USE ONLY. NOT FOR SALE FOR MARKETING OR ADVERTISING CAMPAIGNS. THIS PICTURE IS DISTRIBUTED EXACTLY AS RECEIVED BY REUTERS, AS A SERVICE TO CLIENTS. NO THIRD PARTY SALES. SOUTH KOREA OUT. NO COMMERCIAL OR EDITORIAL SALES IN SOUTH KOREA - RTS9ZSA
Photograph by KCNA/Reuters

The UN Security Council imposed new sanctions on North Korea on Wednesday aimed at cutting the Asian country’s annual export revenue by a quarter in response to Pyongyang’s fifth and largest nuclear test in September.

The 15-member council unanimously adopted a resolution to slash North Korea’s biggest export, coal, by about 60% with an annual sales cap of $400.9 million, or 7.5 million metric tons, whichever is lower.

The United States was realistic about what the new sanctions on North Korea—also known as the Democratic People’s Republic of Korea (DPRK)—will achieve, the U.S. Ambassador to the United Nations, Samantha Power, told the council after the vote.

“No resolution in New York will likely, tomorrow, persuade Pyongyang to cease its relentless pursuit of nuclear weapons. But this resolution imposes unprecedented costs on the DPRK regime for defying this council’s demands,” she said.

“In total, this resolution will slash by at least $800 million per year the hard currency that the DPRK has to fund its prohibited weapons programs, which constitutes a full 25% of the DPRK’s entire export revenues.”

That $800 million is 6.5 times the amount the World Food Program said it needed in 2016 to fund its North Korea operations, or 1.2 million tons of rice at market prices.

North Korea needs 5.2 million tons of rice annually to meet its stated target of providing people with 573g of rice a day.

Reclusive North Korea and the rich, democratic South are technically still at war because their 1950-53 conflict ended in a truce, not a peace treaty. The North regularly threatens to destroy the South and the South’s main ally, the United States.

North Korea has been under UN sanctions since 2006 over its nuclear and ballistic missile tests. It conducted its latest nuclear test on Sept. 9.

“Sanctions are only as effective as their implementation,” U.N. Secretary-General Ban Ki-moon told the council. “It is incumbent on all member states of the United Nations to make every effort to ensure that these sanctions are fully implemented.”

China, believed to be the only country buying North Korean coal, would slash its imports by some $700 million compared with 2015 sales under the new sanctions, diplomats said.

While China said it was opposed to North Korea’s nuclear tests, UN Ambassador Liu Jieyi accused the United States and South Korea of intensifying confrontation with North Korea by scaling up military exercises and presence.

He described the planned U.S. deployment of a Terminal High Altitude Area Defense (THAAD) anti-missile system in South Korea as “neither conducive to the realization of the goal of de-nuclearization of the Korean peninsula nor helpful to the maintenance of peace and stability on the peninsula.”

The UN resolution blacklisted 11 more individuals, including former ambassadors to Egypt and Myanmar, and 10 entities, subjecting them to a global travel ban and asset freeze for ties to North Korea’s nuclear and missile programs.