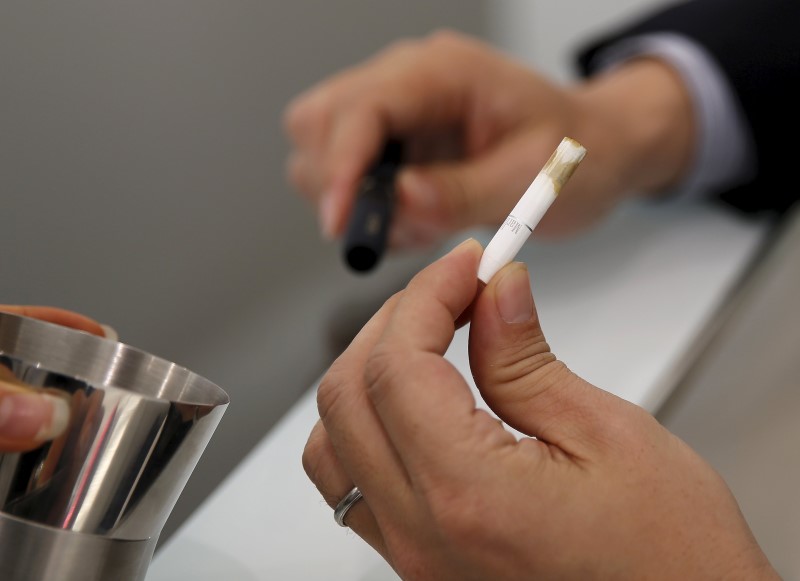 A customer takes off a filter after trying a Philip Morris' "iQOS" smokeless tobacco e-cigarette at an iQOS store in Tokyo, Japan, March 3, 2016. REUTERS/Toru Hanai
Photograph by Toru Hanai — Reuters

The company’s IQOS smokeless cigarette, which is already on sale in over a dozen markets including Japan, Switzerland and Italy, heats tobacco enough to produce a vapor without burning it. The company believes that makes it much less harmful than cigarettes.

“I believe there will come a moment in time where I would say we have sufficient adoption of these alternative products … to start envisaging, together with governments, a phase-out period for cigarettes,” Andre Calantzopoulos said in an interview on BBC Radio 4.

“I hope this time will come soon,” he added.

Philip Morris (PM), the maker of Marlboro cigarettes everywhere except the United States, gets the vast majority of its sales and profits from traditional cigarettes, which kill an estimated 6 million people a year worldwide.

Even though the tobacco market is shrinking as more people quit, Calantzopoulos said that by 2025 there will still be more than a billion smokers worldwide.

Still, the company has invested over $2 billion into potentially “reduced risk” products that deliver the addictive nicotine without the deadly smoke.

Calantzopoulos said the economics of these products was similar to cigarettes.

The IQOS is an electronic device that is used with mini cigarettes. It is different from e-cigarettes, which use a nicotine-laced liquid.

“If smokers switch to electronic cigarettes or other products that can be shown to cut the risks to their health, this could lead to a big improvement in public health,” said Deborah Arnott, chief executive of U.K. health charity Action on Smoking and Health. “But we need independent evidence to support any claims made by the tobacco industry.”

ASH said that until independent evidence shows that IQOS and similar products are substantially less harmful than smoking, they should be regulated in the same way as cigarettes.