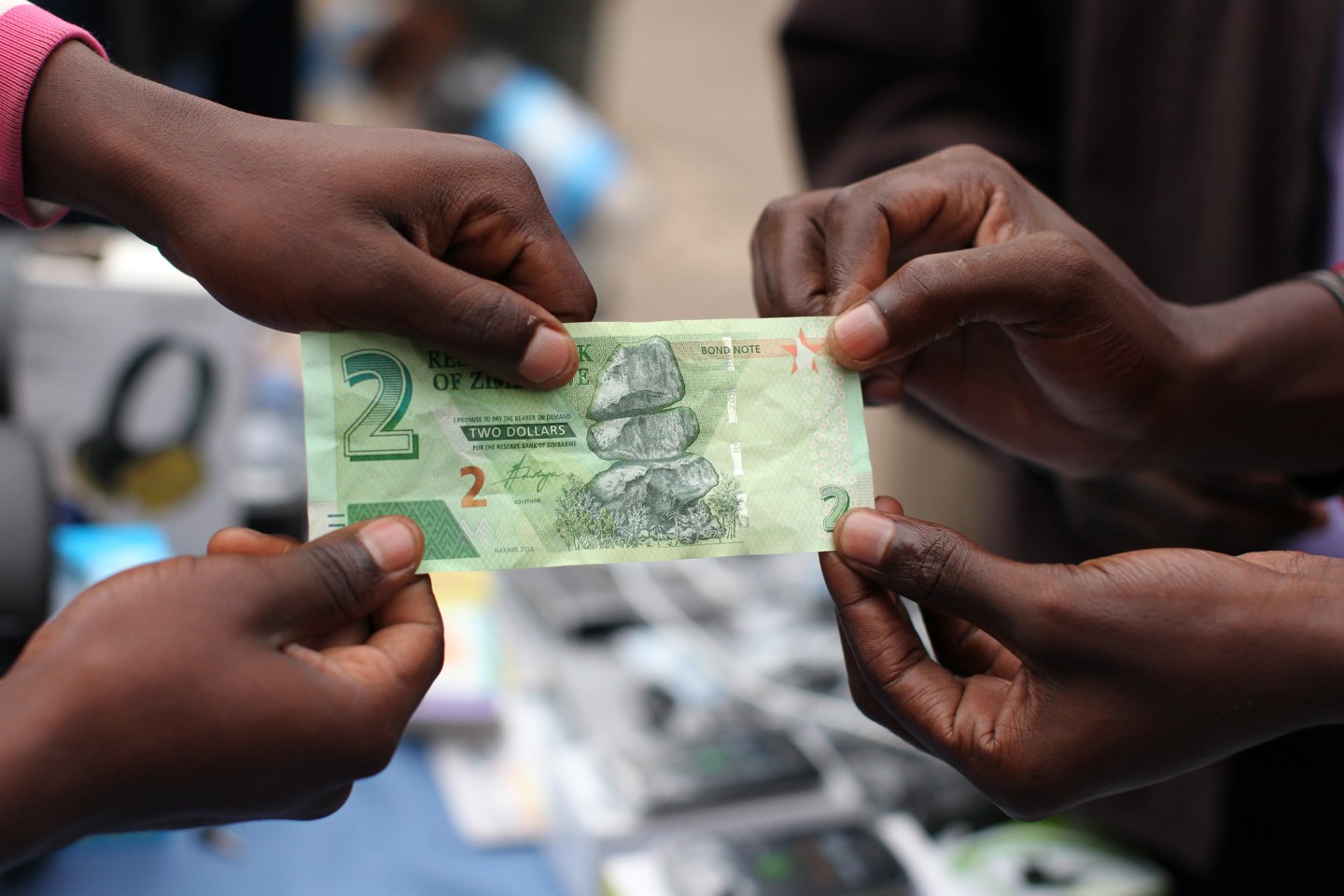 This banknote, photographed in Harare, is the new currency launched by Zimbabwe Central bank due to the country's economic crisis and cash shortage.
Wilfred Kaiese/Anadolu Agency/Getty Images

Zimbabwe launched a “bond notes” currency that held its value against the U.S. dollar on Monday, despite warnings that it could cause hyperinflation and suggestions it could bring down President Robert Mugabe.

The bright green bond notes, introduced by the southern African nation’s central bank to try to ease a shortage of dollars, were accepted by most businesses and black market traders.

At the Road Port bus station in the capital Harare, an informal foreign currency market, traders said the $2 bond notes were trading, as planned by the central bank, at 1:1 with the dollar.

That will provide some relief for Mugabe as many Zimbabweans fear the bond notes will quickly lose value and some have staged protests. Internal intelligence briefings seen by Reuters also raise the possibility that the bond notes, if they crash, could spell the end of the 92-year-old leader’s 36-year rule.

Undeterred by a heavy downpour, illegal currency dealers swarmed round a Reuters correspondent’s car offering to exchange bond notes for South Africa’s rand or U.S. dollars, Zimbabwe‘s currencies since the local dollar was scrapped in 2009 during a battle against hyperinflation.

“For now it is the same rate whether it’s bond or U.S. dollar, my brother. We will see in the next few days whether it changes,” said Tatenda, a currency tout who declined to give his surname.

His business card, which gave only his first name and mobile number, summed up the lot of most of Zimbabwe‘s 13 million people since the multi-billion percent inflation of eight years ago wiped out the nation’s savings.

“Hustlers for life, if you can’t beat them, join them,” the card read. “Money don’t change us, but we are money changers.”

Formal businesses were told they had to accept the notes as legal tender. Most did so though Zimbabweans circulated one cellphone video clip of a teller at South African supermarket chain Pick n Pay refusing to accept a $2 bond note.

At independence from Britain in 1980, Zimbabwe was regarded as one of Africa’s most promising prospects. But its economy has nearly halved since 2000 after the violent seizure of white-owned commercial farms and disastrous printing of money.

The secrecy of the Reserve Bank of Zimbabwe (RBZ) around the release of the notes, including its failure to publish security features or say where they are being printed, has heightened fears it will print more than a stated $200 million issuance limit.

On Sunday, before the notes were introduced, pictures of them were already circulating on social media – a leak that the RBZ said came from the Post Office Savings Bank (POSB), a state-owned lender that it fined $500,000.

“The employees of the POSB who took, publicised and distributed the images on social media have been dismissed with immediate effect,” the central bank said.

It first announced plans to introduce the bond notes in May to address the chronic cash shortages and supplement the dwindling U.S. dollars that have been in circulation for the past seven years.

However, the announcement was followed by a run on the banks as Zimbabweans tried to empty their accounts of hard currency.

“People are sceptical because of what happened to our old currency in the past when the money lost its value. That is why they think it could happen again,” said 36-year-old street hawker Tennison Tigere, after withdrawing $50 of bond notes.

On Monday, Prosper Mkwananzi, spokesman of social media movement #Tajamuka, which has organised some of the protests against Mugabe, was arrested while speaking to journalists about the bond notes.

“We believe that it is ill-conceived and will not resolve the crisis in the country. It is actually daylight robbery,” said Mkwananzi, before being whisked away by a dozen anti-riot police at an open space in central Harare.

Even if they do not depreciate in value, many economists say the bond notes will serve only as a sticking plaster for an economy with a $250 million-per-month trade deficit.

In addition to weak exports, Zimbabwe has had to deal with a devastating drought that has left millions facing hunger and boosted the need for food imports.

Zimbabwe is $1.6 billion in arrears to the World Bank and African Development Bank, outstanding debt that prevents Harare from securing any extra financing from the two institutions or the International Monetary Fund.