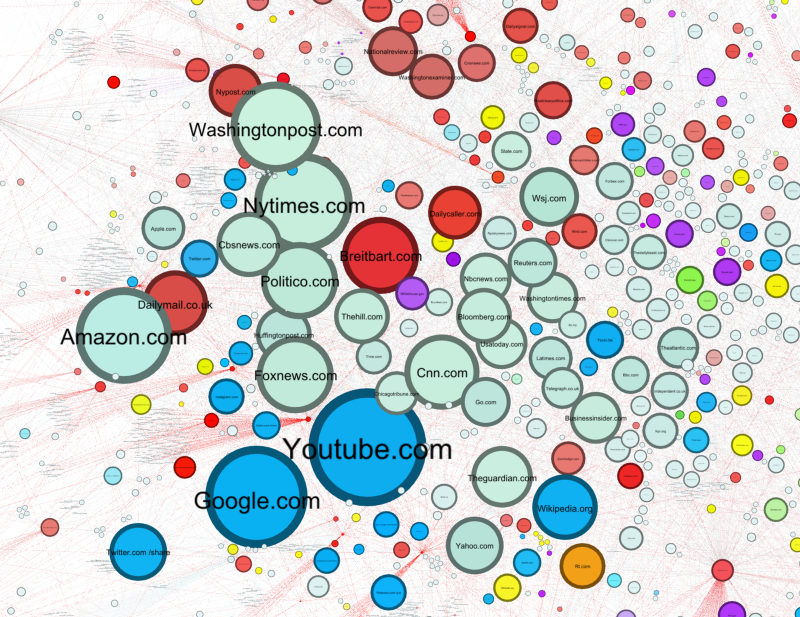 As debate continues over the extent to which “fake news” helped Donald Trump win the presidential race, many have talked about a network of loosely-affiliated, right-wing sites that distributed this content through social media platforms. But few have tried to describe it in scientific terms.

Jonathan Albright, a professor at Elon University in North Carolina, is an expert in data journalism who has worked for both Google and Yahoo. He specializes in media analytics and social networks, and he has created a network map or topology that describes the landscape of the fake-news ecosystem.

Even if Facebook and Google are the largest distributors of fake news or disinformation because of their size, Albright’s work arguably provides a scientifically-based overview of the supply chain underneath that distribution system. And that could help determine who the largest players are and what their purpose is.

Albright says his research started with a look at the traffic generated by some of the top fake-news distribution sites. As he described in a post published on Medium, he came to the conclusion that banning them from ad networks run by Google or Facebook wouldn’t solve the problem.

That’s because much of the traffic to and from those sites—and therefore their presence at the top of Google’s search engine or high up in the Facebook news feed—is achieved organically, he argued. Many seemed to be driven primarily by sharing through old-fashioned networks. In other words: they’re sent via email.

This led Albright deeper into the traffic-analysis and social mapping process. He tried to determine which of the top sites were driving the most traffic and who else they were connected to via Facebook and Twitter. As Albright described it:

Google’s ad network and Facebook’s News Feed/“Related Stories” algorithms amplify the emotional spread of misinformation, and social media naturally turn up the volume of political outrage [but] I think journalists, researchers and data geeks should first look into the factors that are actually 1) producing the content and 2) driving the online traffic.

Next Albright did what he called a “medium-scale data analysis,” crawling and indexing 117 websites that are known to be associated with fake news. In a follow-up post, entitled The #Election2016 Micro-Propaganda Machine, he mapped the connections between those sites and plotted them as dots, based on the strength of their connections.

Albright subsequently expanded his sample to include more than 300 sites, including some prominent distributors such as Breitbart News. In total, he collected and analyzed the incoming and outgoing traffic of more than 1.3 million URLs.

More than anything, the impression one gets from looking at Albright’s network map is that there are some extremely powerful “nodes” or hubs that propel a lot of the traffic involving fake news. And it also shows an entire universe of sites that many people have probably never heard of.

Two of the largest hubs Albright found were a site called Conservapedia—a kind of Wikipedia for the right wing—and another called Rense, both of which got huge amounts of incoming traffic. Other prominent destinations were sites like Breitbart News, DailyCaller and YouTube (the latter possibly as an attempt to monetize their traffic).

Albright said he specifically stayed away from trying to determine what or who is behind the rise of fake news. The Washington Post recently wrote about a report from a little-known group that says a network of Russian actors are behind the wave, although the analysis was fairly weak.

Instead, Albright said he just wanted to try and get a handle on the scope of the problem, as well as a sense of how the various fake-news distribution or creation sites are inter-connected. Albright also wanted to do so with publicly-available data and open-source tools so others could build on it. He said:

Reporting on ‘fake news’ with unsubstantiated claims and incomplete evidence isn’t the best approach—in fact, it’s probably the worst strategy, because it adds to the existing noise. Lately, I feel that many journalists and news organizations are churning out news in response to the public, rather than leading the way to inform them on the underlying issues.

With the landscape of the fake-news ecosystem outlined in terms of the connections between the various nodes, it may be easier for platforms like Google and Facebook—or even for other media outlets—to track the spread of the problem and come up with potential solutions.