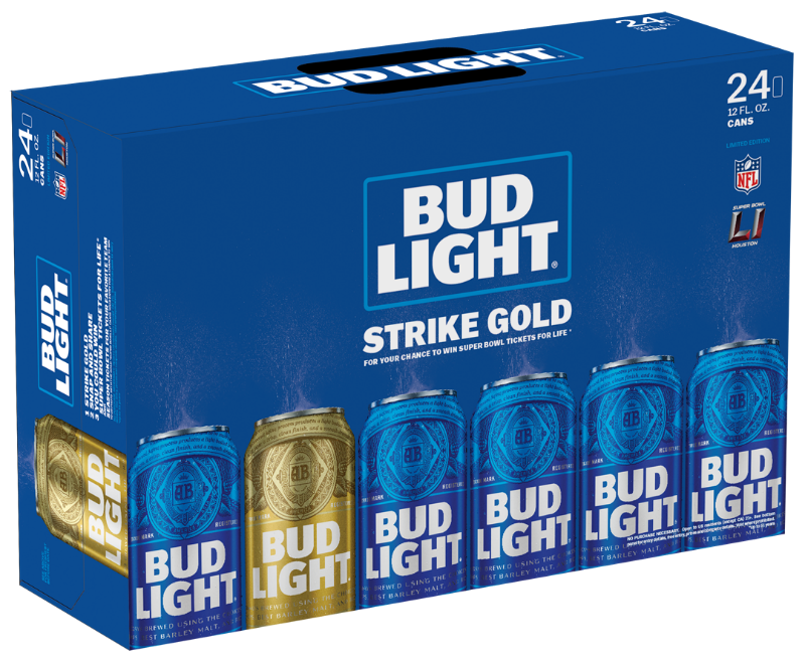 Anheuser-Busch is the new Willy Wonka.

The brewing company behind Bud Light, the official beer sponsor of the NFL, announced its Super Bowl contest last week involving gold cans of beer. Similar to how the golden tickets gave chocolate eaters a chance to go to Willy Wonka’s chocolate factory, the golden beer cans give drinkers a chance to win a lifetime supply of Super Bowl tickets. You can find the specialty beer in 18-, 24-, and 30-packs of Bud Light marked “Strike Gold,” according to the press release.

The contest kicks off today and runs through Jan. 13. And if you’re one of the lucky ones to find a golden can of Bud Light, take a picture with it and post it to Facebook, Instagram, Twitter, or BudLight.com using the hashtags #SBTix4Life and #Sweeps. One winner will be chosen each week to receive a pair of season tickets to their favorite NFL team, and one grand prize winner will win “Super Bowl tickets for life”—as long as they don’t live past the next 51 Super Bowls.

“Most NFL fans likely won’t see one Super Bowl in their lifetime,” Anna Rogers, director of NFL partnerships and strategy at Anheuser-Busch, said in the press release. “We figured what better way to reward one of the NFL’s biggest fans than by giving him or her tickets to the big game for the rest of their life?”