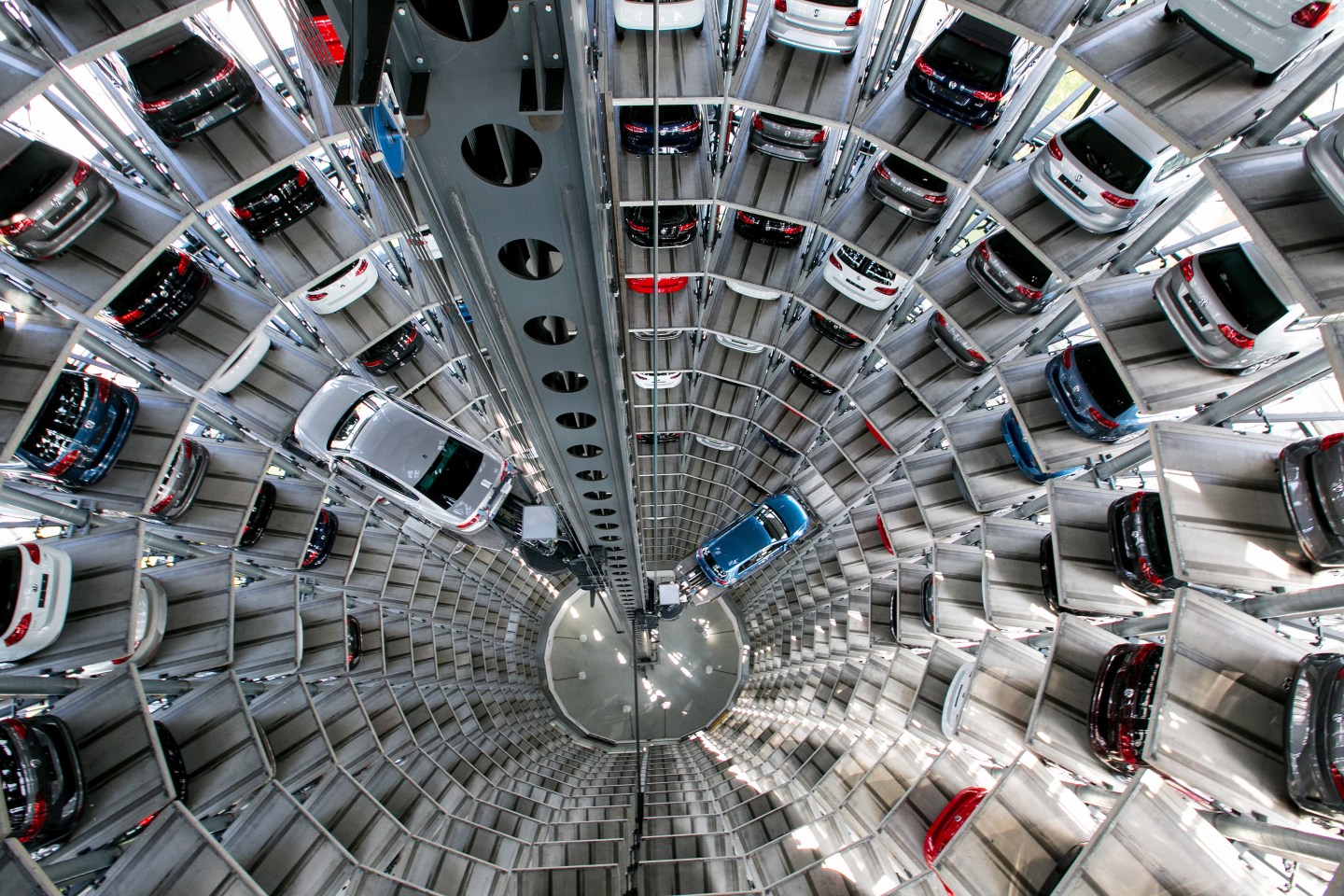 A Passat TSI plug-in-hybrid automobile, left, and a Volkswagen e-Golf electric automobile, produced by Volkswagen AG (VW), are transported on elevation platforms as new VW automobiles sit in storage bays inside one of the automaker's glass delivery towers at the VW factory in Wolfsburg, Germany, on Friday, April 29, 2016. Porsche Automobil Holding SE, the investment vehicle of the billionaire family that controls VW, stuck to a goal of making acquisitions beyond the beleaguered carmaker, even as its dwindling cash on hand reduces the scope of possible transactions. Photographer: Krisztian Bocsi/Bloomberg via Getty Images
Photograph by Krisztian Bocsi — Bloomberg via Getty Images

Just as Porsche and Audi have fought for supremacy on the race track, the Volkswagen brands are now locked in a cut-throat battle to develop and manufacture the next generation of electric cars at a group embroiled in the “Dieselgate” scandal.

Volkswagen Group denies that the kind of internal rivalry that it encouraged at the Le Mans 24 hour race is getting out of hand in the boardroom.

But senior executives told Reuters that in-house conflict, particularly between VW and its premium brands, is intensifying over which factories will develop next generation cars while the German group has to cut costs elsewhere to pay for cleaning up its emissions cheating scandal.

“There is a cut-throat battle for resources. Every brand with engine-manufacturing capacity now wants a leadership role when it comes to electric motors, battery packs and battery-cell expertise,” an executive at one of the VW divisions, who declined to be named, said.

Since returning to top-line racing three years ago, Porsche has beaten Audi to the world championship for sportscars and at Le Mans for the past two seasons.

Porsche is Spending $1 Billion on Its Electric Sports Car

Porsche will again seek to defend the titles in 2017 with its ultra-sophisticated gas hybrids. But Audi, whose hybrid racers showcased the group’s troubled diesel technology, has pulled out after winning the French race 13 times.

In the broader competition, Porsche also appears in the ascendant as Audi—which since the 1990s has achieved rapid sales growth to rival Mercedes-Benz and BMW—now struggles with the Dieselgate fallout and a series of negative press leaks.

Jobs are at stake as the group—whose brands also include Skoda, SEAT, Bugatti, Bentley and Lamborghini—moves to new technology and faces up to Dieselgate penalties and lawsuits which analysts say could cost as much as 30 billion euros ($32 billion).

Because electric cars are far less complex to assemble than traditional combustion engine vehicles, manufacturers may not be able to guarantee the same level of employment in future—a thorny issue in an industry dominated by a workforce with multi-year collective wage agreements.

Volkswagen and its unions agreed to cut 30,000 jobs at the core VW brand in exchange for a commitment to avoid forced redundancies in Germany until 2025.

For more on Porsche, watch:

The executives at Audi, VW and Porsche, who all declined to be named, said conflict between group brands is not new and healthy internal competition can push them to greater technical and commercial achievements.

However, some critics said the scramble has become more intense partly because the company last year lost a powerful central figure who controlled the balance of power between the brands, their managers and worker representatives.

That balance is now being redefined, pitting Volkswagen, one of the group’s least profitable mass market brands, against its highly profitable siblings Porsche and Audi.

Volkswagen dismissed this analysis, and denied that an unhealthy power struggle was underway at all. “This is pure speculation which lacks any kind of foundation and is something which we emphatically reject,” spokesman Eric Felber said.

Audi to Delay Technology Projects As It Cuts Costs

Group chief executive Matthias Mueller has previously worked as Audi’s head of product management and Porsche boss. But since getting the top job after the scandal erupted last year, he has yet to build the level of power once enjoyed by former chairman Ferdinand Piech, whose extended family controls the firm.

Piech, who spent years cultivating ties to VW’s powerful labor leaders, was an engineering genius who inspired fierce loyalty from staff because of his willingness to take risks. He masterminded the Porsche 917 racer, which starred alongside Steve McQueen in the 1971 movie “Le Mans,” as well as the legendary Audi Quattro rally car of the 1980s.

Piech also turned Audi into one of the main research and development hubs for the 12-brand group, although eventually he lost a separate power struggle, quitting as chairman last year.

While the main contributor to VW group profit, Audi has lost some battles in recent years for developing vehicle components to the smaller Porsche brand, and is also competing with the VW brand to develop next generation zero-emission cars.

Since diesel cheating was exposed, Audi has lost two research and development chiefs and the head of its automotive electronics division who did pioneering work in the area of autonomous driving and battery technology.

It appointed a new development chief on Friday but Audi and its Chief Executive Rupert Stadler remain under fire for the brand’s involvement in the cheating in emissions tests.

Volkswagen: To Drop Diesel Vehicles in the U.S.

Meanwhile, Porsche—a firm that VW swallowed up in 2012—has emerged as a strong rival engineering center. Porsche’s MSB platform, used for its four-seater Panamera model, has been adopted for the next generation Bentley Continental even though Audi had developed a similar offering.

Porsche has also taken over production of eight-cylinder gasoline engines for large sportscars for the VW group, even though Audi has its own engine factory in Hungary.

“For Audi, it has always been difficult to accept if Porsche gets something. They tried to resist the Porsche platform but in the end, a business decision was made,” a Porsche source said.

Audi is not out in the cold. It remains the center of excellence for sports utility vehicles, a lucrative and growing market, where it supplies platforms to Porsche and other brands such as Bentley. With self-driving vehicles likely to play a major future role in the industry, Audi also develops autonomous cars for the group.

On the race track, Audi will compete in the Formula E electric-car championship.

Nevertheless, analysts say VW must not neglect it in allocating resources. “Some successful divisions like Audi need to be nurtured,” said Juergen Pieper at Metzler Bank.

A separate internal race has begun to become an engineering hub for electric vehicles, a field which includes research and development of battery cells, battery packs and electric motors, in the hope of preserving local jobs.

Porsche has developed the J1 electric cars platform, creating 1,000 jobs at its plant outside the southwestern city of Stuttgart, while the Volkswagen brand made its own MEB platform for conventional passenger cars in Lower Saxony, and pledged to create 9,000 jobs in developing autonomous and electric vehicles.

Some senior executives say the fierce competition between brands is nothing unusual. But others point to press reports that appeared during the final days of VW’s future pact negotiations as an example of a more abrasive power struggle, although the source of the leaks remains unclear.

In July, German paper Bild am Sonntag reported that internal auditors had ordered Stadler to repay 12,500 euros in expenses spent on a beer-drinking contest.

Then on Nov. 6 it said California’s Air Resources Board had discovered a new software-cheating device in Audi cars. The report appeared as Audi tried to secure a final deal with U.S. regulators on compensating owners of cars with Audi-built motors.

On Nov. 11, Der Spiegel weekly said VW supervisory board members were discussing possible successors for Stadler, but a senior source dismissed this. “There is no reason why Rupert Stadler cannot continue as Audi’s chief executive,” he said.