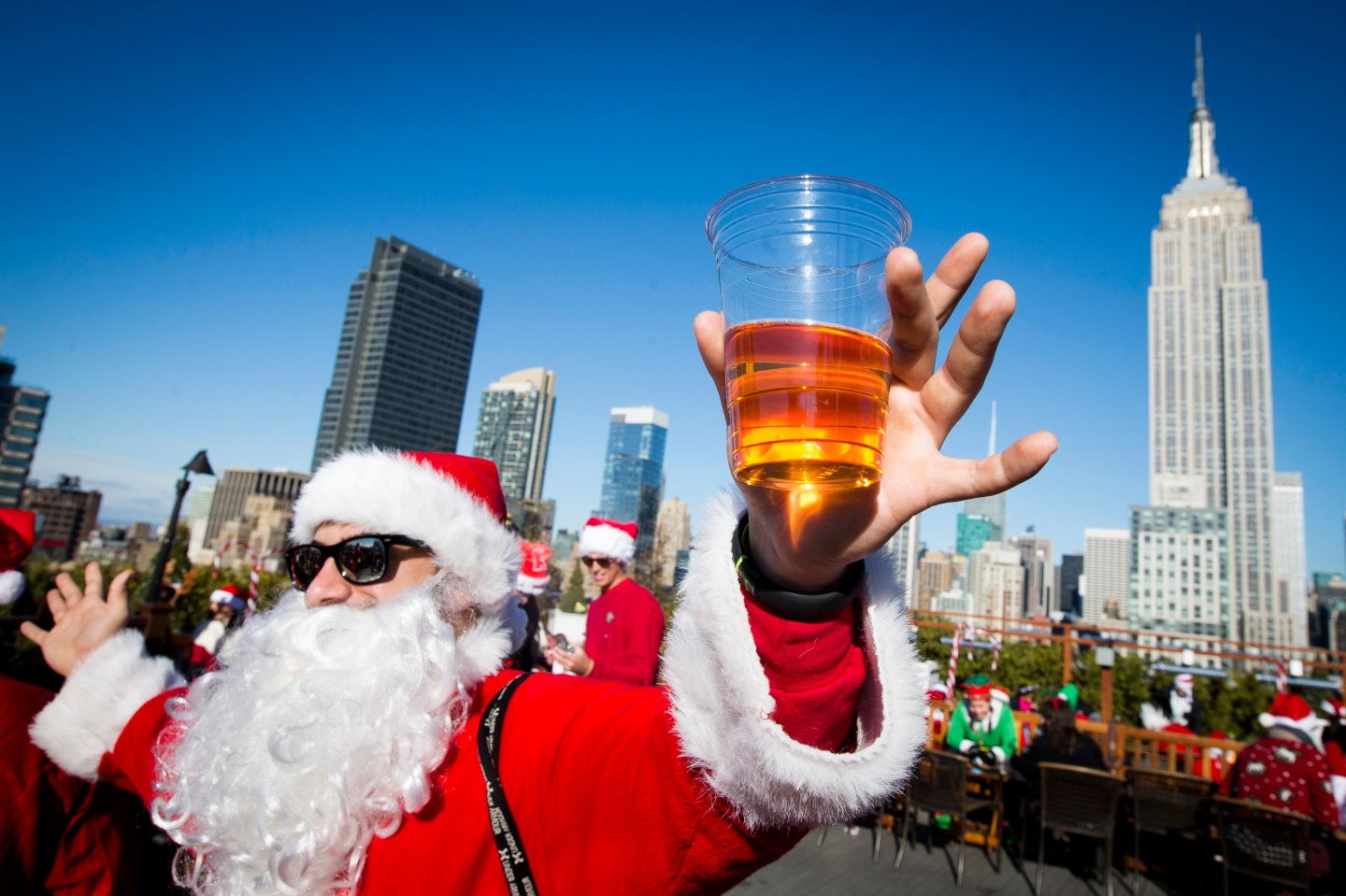 A man dressed as Santa Claus holds a beer as he and others participate in SantaCon on a rooftop bar Saturday, Dec. 13, 2014, in New York. SantaCon organizers retained lawyer Norman Siegel last week as part of an effort to tame the excesses of the daylong party. Siegel said the government cannot ban SantaCon. But he said the government can reasonably regulate the event. (AP Photo/John Minchillo)
Photo by John Minchillo—AP

Liquor companies have again pulled out all the stops to get you to buy swanky gift sets this holiday season.

Each year, the industry’s biggest producers—including Diageo and Pernod Ricard—as well as smaller upstart brands, come up with innovative, wild, opulent gifts that can be paired with their brands. On this year’s list, we’ve even got a bourbon-kissed denim jacket, as well as a watch, a “whiskey wheel,” and a copper gnome. The idea is that shoppers will be enticed by some unique sets and partnerships, rather than just buy a simple bottle of vodka or whiskey.

The Distilled Spirits Council has estimated that around 40% of the industry’s nearly $72 billion in retail sales occur in the final three months of the year. That jolt is attributed to gift giving around the holidays. Champagne and wine producers, as well as some brewers, also see increased sales in the final months of the year.

Here are nine new gift ideas for the adults on your shopping list.

Basil Hayden is working with local arts to create a selection of six items that are meant to pair with a bottle of Basil Hayden’s (the liquor is shipped separately in cities that ReserveBar ships to). The various gift sets include a travel bag, bar cart, and candle set, but we especially love the “Whiskey Wheel”—which features a revolving tray of six glasses. Only 15 of those wheels are available for purchase: $469, Huckberry.com.

Absolut Elyx’s annual gift item this year is a copper gnome, which the company is calling “Felix.” Parent Pernod Ricard makes Absolut in Sweden and the gnome has ties to that region—called “Tomte” in Swedish, gnomes feature in folklore there and are strongly connected to the winter holiday season. Every gnome that Absolut Elyx sells will help provide 560 liters of water—one month’s supply—to someone in need: $144, reservebar.com.

Crown Royal Vanilla, available for the first time this holiday season, seems like the perfect fit for the season. Diageo suggests mixing it with sodas (for a vanilla twist on the ‘hard soda’ alcohol trend), as well as classic cocktails like the Vanilla Old Fashioned or the Vanilla Hot Toddy. Crown Royal Vanilla is also sold with a cream-colored bag and box—that packaging is the signature that Crown Royal is known for: $24.99, totalwine.com.

Jameson whiskey is one of Pernod Ricard’s biggest brands and despite the size, it continues to sell strongly. Annual sales for the latest fiscal year jumped 12% by volume, as the world continues to fall in love with whiskey. This Irish whiskey gift set packages three Jameson expressions—Jameson Irish Caskmates, Jameson Irish Whiskey, and Jameson Select Reserve Black Barrel: $39.99 for three 200ml bottles, missionliquor.com.

If Academy Award winning actor George Clooney is to be believed, this box of tequila is a tasty treat for the holidays. Yes, the Oscar winner is one of the owners of Casamigos—he shares ownership with Mike Meldman and Rander Gerber (the latter is the husband of model Cindy Crawford). Casamigos has been a fast-growing tequila, benefiting from consumer interest in smaller brands that are viewed as “craft.” Sets range between $34.99 to $54.99 http://www.philippeliquorsnyc.com.

This item is not consumable but still includes a form of whiskey. The denim jean jacket, made by Noble Denim, was actually aged in Bulleit bourbon barrels, and is available in limited quantities online and at the Bulleit Frontier Whiskey Experience in Louisville beginning in mid-November. Noble and Bulleit owner Diageo have partnered before: they made barrel aged jeans two years ago: $285, nobledenim.com.

Highland Park is releasing only 28,000 bottles of this edition of the brand’s single malt Scotch whisky—and just around 4,400 bottles will be made available in the U.S. market. It is a 15-year-old single malt that was bottled at 45.2% ABV and Highland Park says the beverage itself has aromas of red fruits and vanilla, as well as some cinnamon and dark chocolate: $300, highlandpark.co.uk.

The Kerrygold brand, which is owned by about 14,000 Irish dairy farmers, is launching an Irish Cream Liqueur in the beginning of December. The item will be a mix of Irish dairy cream, real chocolate and aged Irish whiskey. The beverage is already winning some praise: it was declared the World’s Best Cream Liqueur at the World Drink Awards. $24.99, Kerrygoldirishcream.com.