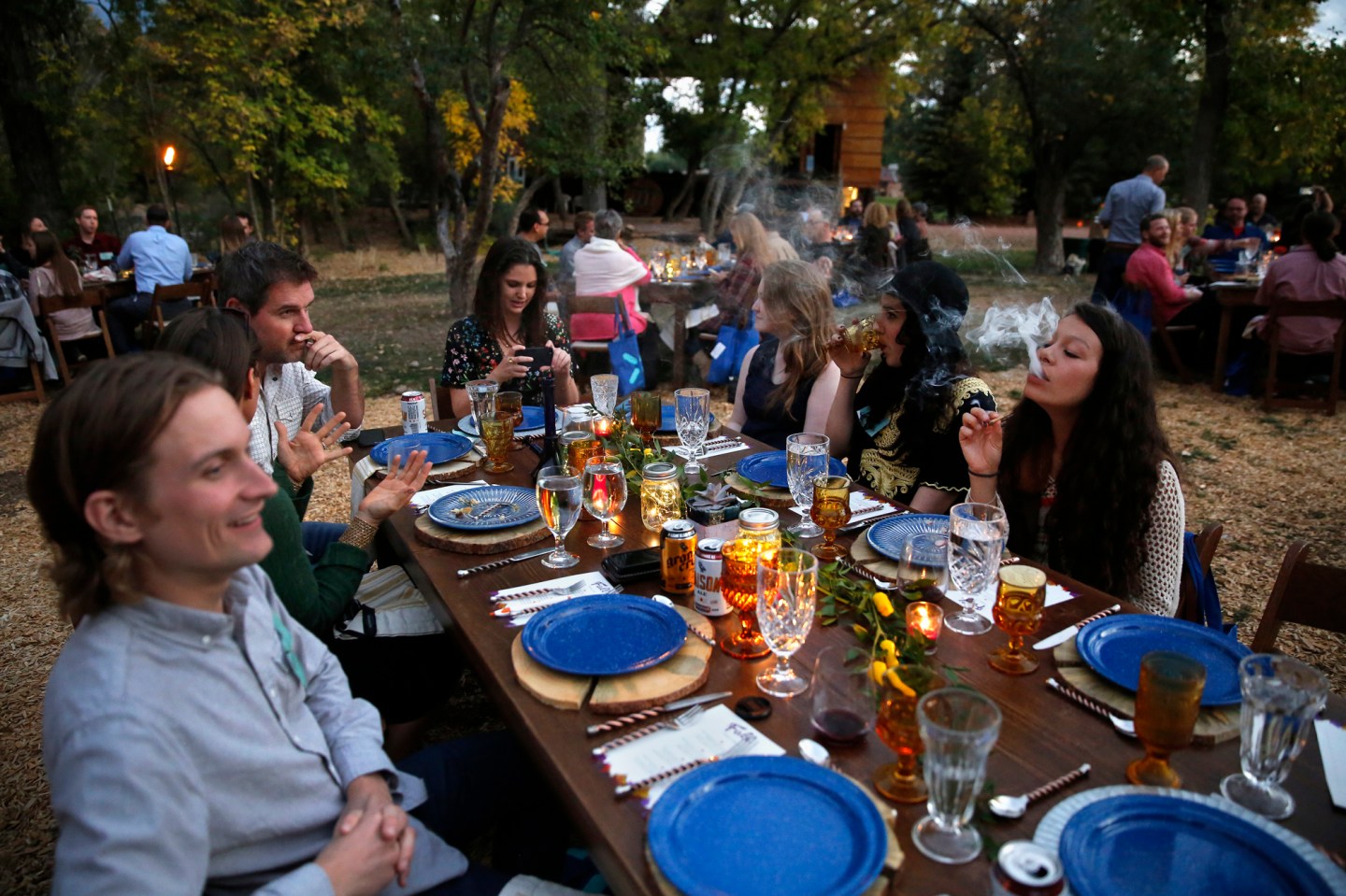 FILE - In this Oct. 2, 2016, file photo, diners smoke marijuana as they eat dishes prepared by chefs during an evening of pairings of fine food and craft marijuana strains served to invited guests dining at Planet Bluegrass, an outdoor venue in Lyons, Colo. Opponents of a state ruling that would prevent bars and many restaurants in Denver from offering on-site marijuana consumption said the ruling would overturn a law approved by voters and force people to sneak around while they use pot and consume alcohol. The new rule announced Friday, Nov. 18 by the Liquor Enforcement Division of the Colorado Department of Revenue bars liquor-license holders from applying for a permit to allow the consumption of pot. (AP Photo/Brennan Linsley, File)
Brennan Linsley AP

Opponents of a state ruling that would prevent bars and many restaurants in Denver from offering on-site marijuana consumption said the ruling would overturn a law approved by voters and force people to sneak around while they use pot and consume alcohol.

The new rule announced Friday bars liquor-license holders from apolplying for a permit to allow the consumption of pot. The Colorado Department of Public Health and Environment said using alcohol and marijuana together increases impairment.

Mason Tvert, a spokesman for the national Marijuana Policy Project, said the measure approved by voters this month would allow servers to keep track of customers who drink and consume pot products instead of forcing them to go outside or hide behind closed doors.

“Under the new law, people would be wearing a green wristband that would identify them. Our alcohol policies already rely on the judgment of the server,” Tvert said.

Daniel Landes, owner of the City O’ City restaurant and bar in Denver, which has a fully stocked bar that includes chai infused rye whiskey and a vegetarian menu, said he wants the option of holding special events where marijuana is allowed, including cannabis conventions in Denver.

“I’m in the hospitality business, and there is no place like this to use marijuana. That is inhospitable,” he said.

The Path to Marijuana Legalization Still Faces Many Roadblocks

On Nov. 8, Denver voters approved a first-in-the-nation law allowing willing bars and restaurants to give people the option to use marijuana alongside a cocktail or meal. Smoking pot would not be allowed inside, and the locations would have to first get the approval of neighbors or business districts. Bars and restaurants would not be allowed to sell marijuana products, and people would have to bring their own.

The ruling by the by the Liquor Enforcement Division of the Colorado Department of Revenue would not apply to pot clubs or coffee shops.

Tvert said the ruling was pushed by the liquor industry trying to protect its turf because they wanted people drinking alcohol and not using other products. The liquor industry and other groups, including Mothers Against Drunk Driving, expressed concerns over safety and liability.

The Colorado Department of Revenue issued a statement saying it was primarily a safety issue.

“After carefully considering all impacts to Coloradans and industry, this rule is in the best interests of public health and safety resulting from public and dual consumption,” said Barbara Brohl, executive director of the Department of Revenue and State Licensing Authority for both the Liquor Enforcement Division and the Marijuana Enforcement Division.

Dr. Larry Wolk, executive director and chief medical officer at the Colorado Department of Public of Public Health and Environment, supported the ruling.

“There is substantial evidence that combined use of marijuana and alcohol increases impairment more than use of either substance alone. If marijuana use is allowed in establishments that hold a liquor license, dual use certainly would occur regularly and present a danger to public health and safety,” Wolk said in a statement.