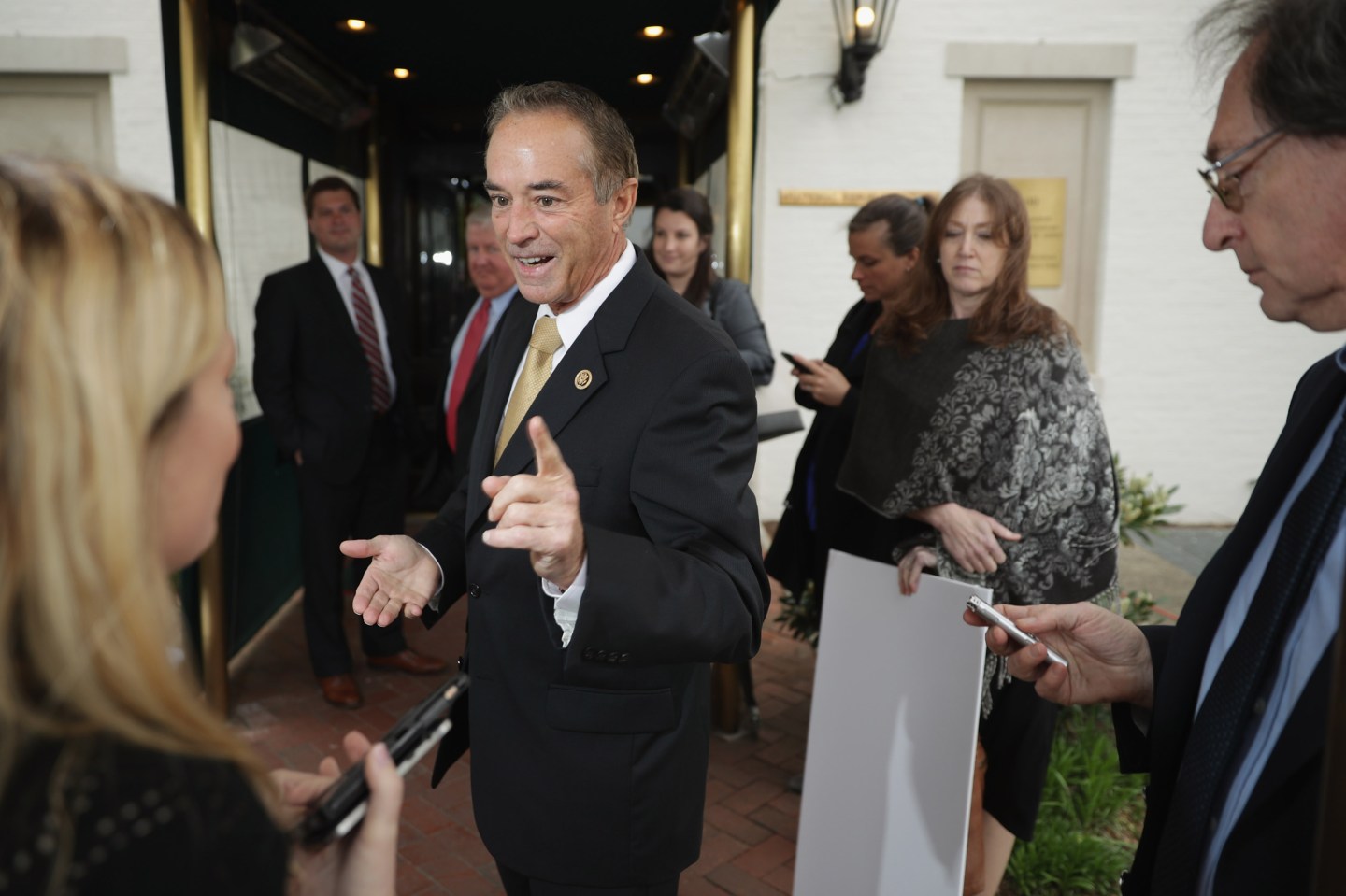 WASHINGTON, DC - APRIL 21: Rep. Chris Collins (R-NY) talks to reporters following a meeting with fellow members of Congress and representatives from the Donald Trump presidential campaign at the National Republican Club of Capitol Hill April 21, 2016 in Washington, DC. The first member of Congress to endorse Trump, Collins said it is 'all but inevitable' that the real estate billionaire will get the 1237 delegates necessary to win the Republican presidential nomination during the first round of balloting at this summer's GOP convention in Cleveland. (Photo by Chip Somodevilla/Getty Images)
Photography by Chip Somodevilla Getty Images

Paul Ryan, the top Republican in the U.S. Congress, says he talks to Donald Trump often, but the president-elect has tapped a little-known lawmaker from western New York to be his eyes and ears among congressional Republicans.

In the latest example of how much Trump values personal loyalty, the billionaire businessman has effectively designated Representative Chris Collins to be the White House transition team’s congressional liaison.

Collins, 66, has been in Congress less than four years. He has no House leadership role. He chairs no committees. He was previously county executive for Erie County, New York.

But Collins was the first lawmaker on Capitol Hill to endorse Trump’s presidential bid. He co-chaired Trump’s U.S. House Leadership Committee during the campaign.

Collins said Ryan, the speaker of the House of Representatives, announced the news about his role to fellow Republicans at a Tuesday caucus meeting. Ryan’s office had no immediate comment.

Collins said he suggested the role to Trump the day after the Nov. 8 elections. “I said I’m going to stay in Congress. But I think I can be a bit of a liaison, if you will, of members, kind of making sure the administration knows exactly what’s going on,” he told reporters.

Trump later mentioned the idea to Ryan, who asked Collins to do the job, according to Collins.

Collins seconded Ryan’s renomination to the speakership on Tuesday, calling the gesture “a sign of Trump’s support for Mr. Ryan.”

Analysts called the move unusual. “A new president generally relies on the leadership,” said Norman Ornstein of the American Enterprise Institute. “But it’s not a role with a great deal of power and it’s not the same as being a conduit once Trump is president and working on policy.”

Collins’ official role is to serve as a conduit to the transition team for lawmakers who want to convey concerns or ideas for legislation and staffing.

An aide said Collins has not participated in legislative discussions between House and Senate Republican leaders and the Trump team.

Ryan told reporters on Tuesday that he and Trump are “on the same page, we’re working hand in glove.”

But the two have not always seen eye to eye. Ryan was slow to endorse Trump for president and once described his comments about a judge of Mexican heritage as “the textbook definition of racism”. Trump has slammed Ryan as “a very weak and ineffective leader.”