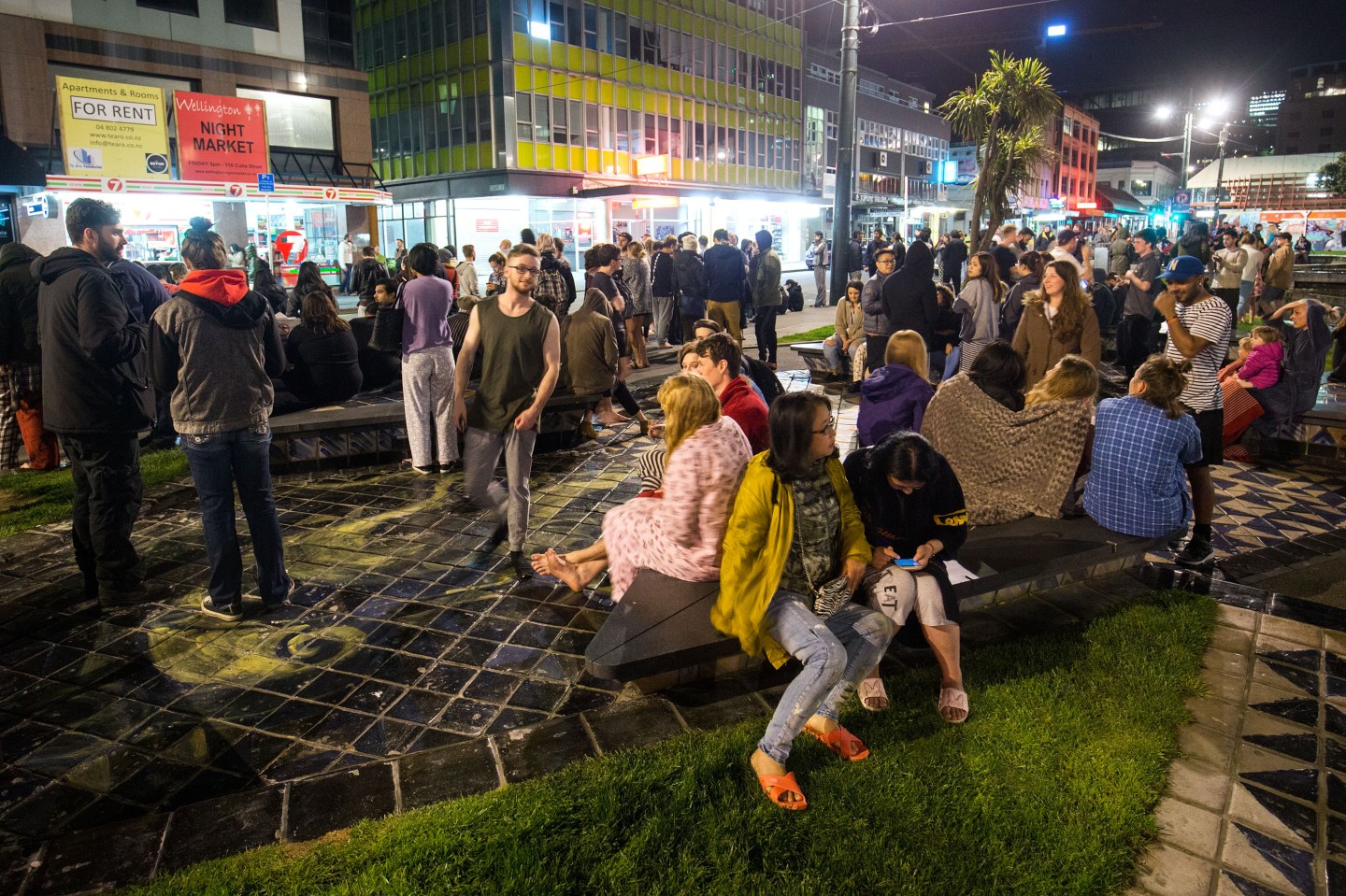 WELLINGTON, NEW ZEALAND - NOVEMBER 14: People wait in Te Aro Park after being evacuated from nearby buildings following an earthquake on November 14, 2016 in Wellington, New Zealand. The 7.5 magnitude earthquake struck 20km south-east of Hanmer Springs at 12.02am and triggered tsunami warnings for many coastal areas. (Photo by Hagen Hopkins/Getty Images)
Hagen Hopkins Getty Images

The magnitude-7.8 earthquake struck in a mostly rural area close to the city of Christchurch but appeared to be more strongly felt in the capital, Wellington, more than 200 kilometers (120 miles) away. The quake was followed by a number of strong aftershocks.

The quake knocked out New Zealand’s emergency call number, 111, for about 10 minutes, police reported. It caused items to fall from shelves and windows to break in Wellington, and forced hundreds of tourists onto the streets as hotels were evacuated.

New Zealand’s Ministry of Civil Defence and Emergency Management reported that a tsunami wave struck at about 1:50 a.m. and warned residents living in low-lying areas anywhere along the country’s east coast to move to higher ground.

The ministry had earlier sent out a message on Twitter saying there was no tsunami threat to the country. But then it sent out another message — “situation has changed – tsunami is possible” — before reporting that a tsunami had, in fact, hit.

There were no immediate reports of any major damage or injuries in Christchurch.

But the quake brought back memories of a magnitude-6.3 earthquake that struck the city in 2011, destroying much of the downtown area and killing 185 people in one of New Zealand’s worst disasters. But Monday’s quake was centered farther away from the one in 2011, which caused damage worth an estimated $25 billion.

As Monday’s quake hit, Christchurch resident Hannah Gin had just sat down in her living room to watch a replay of this weekend’s All Blacks versus Italy rugby match when her house started shaking. Upstairs, her mother let out a scream.

Gin, a 24-year-old lifelong Christchurch resident, is accustomed to quakes, so she said she sat calmly and waited, figuring the rumbling would stop in a few seconds. Instead, the shaking just went on and on — for at least three minutes, according to the clock on her phone, she said by phone.

The quake was far less violent than the one that struck her city in 2011, Gin said, adding that there was no jarring up and down or side to side, just a long, rolling sensation. But it went on for much longer than the typical quakes that strike the area, she said. She was less concerned about running for cover than she was about vomiting from the motion sickness, she said with a chuckle.

“I could hear the sliding door sliding back and forth and we’ve got washing hanging up and I could see the washing moving,” Gin said. “It just kept going and going.”

Her house, which was damaged in the 2011 quake, did not appear to have sustained any new damage from Monday’s quake, she said. She said she had heard from many of her friends who live in the city, and all were safe.

“As far as I know, everyone’s fine,” she said. “We’re all just really shaken.”

In Wellington, 214 kilometers (132 miles) north of the quake’s epicenter, power was knocked out in some places, and some windows were smashed and some chimneys collapsed.

The quake, which struck just after midnight Sunday, was centered 93 kilometers (57 miles) northeast of Christchurch, according to the U.S. Geological Survey. It was at a relatively shallow depth of 10 kilometers (6 miles). Earthquakes tend to be more strongly felt on the surface when they’re shallow.

New Zealand sits on the “Ring of Fire,” an arc of seismic faults around the Pacific Ocean where earthquakes are common.