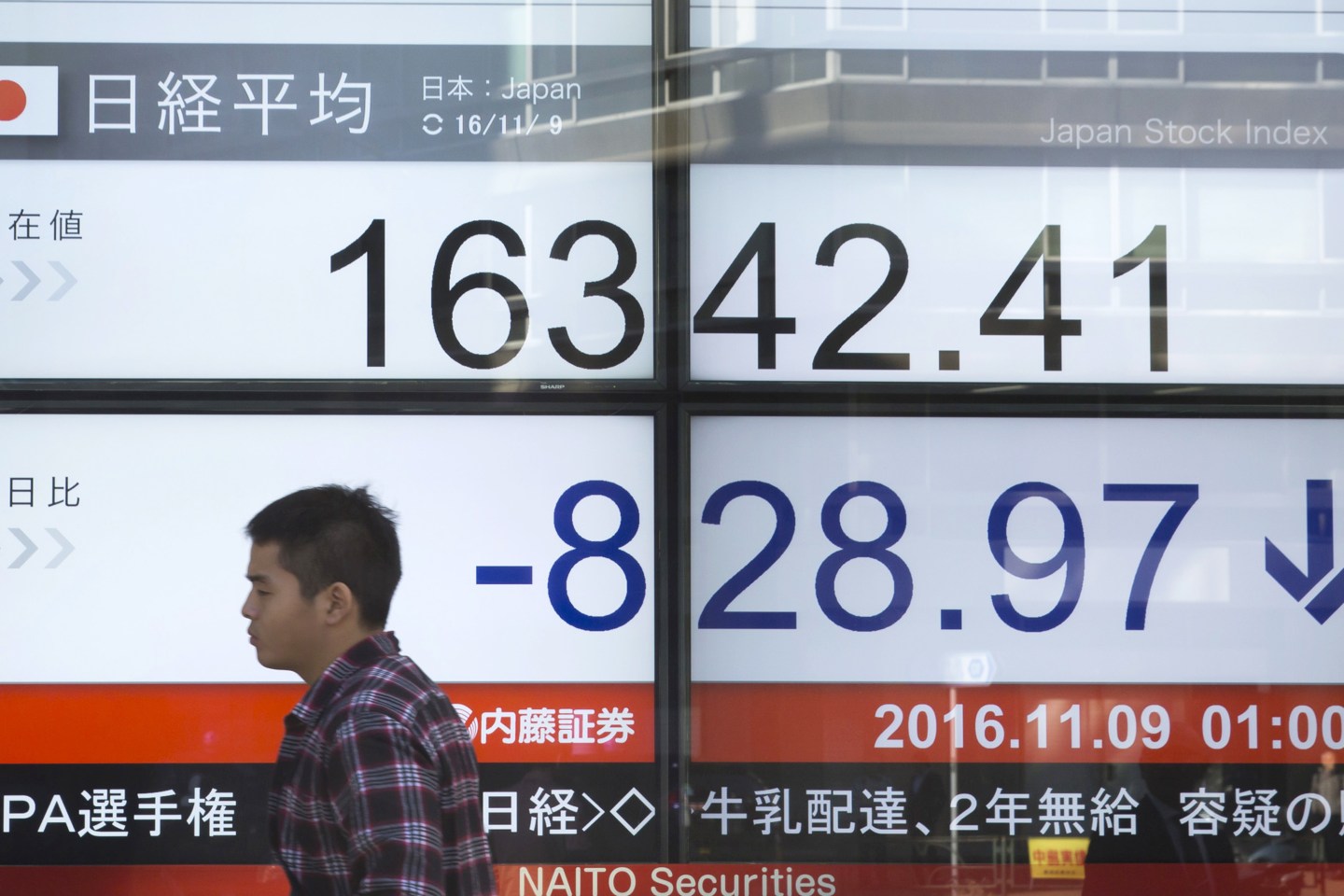 The U.S. dollar, Mexican peso and world stocks began to steady in the European morning on Wednesday, having been hammered overnight as Donald Trump swept to victory in the U.S. presidential election.

European shares were down less than 1% and investors were returning to other markets that had been sent into a tailspin as it became clear the Trump was set for a dramatic victory over heavily-favored Democrat Hillary Clinton.

Investors fear a Trump victory could cause global economic and trade turmoil and years of policy unpredictability, which among other things will discourage the Federal Reserve from raising interest rates in December as long expected.

“I love this country,” Trump said in a victory speech in New York. “America will no longer settle for anything less than the best … We have a great economic plan, we will double our growth and have the strongest economy in the world.”

Sovereign bonds, the Japanese yen and gold were all giving back ground having surged as the state results had come in overnight and also sent the Mexican peso into near free-fall as once again polls and betting markets proved woefully wrong.

Trump’s threats to rip up a free trade agreement with Mexico and tax money sent home by migrants to pay for building a wall on the southern U.S. border have made the peso particularly reactive to events in the race for the White House.

The mild reaction from European stocks was nowhere near as bad as futures markets had indicated and there were signs that the dollar, as well as other currencies and asset classes hit hard overnight, were beginning to level out.

Overnight in Sydney, Sean Callow, a forex strategist at Westpac, had said the market reaction had been “as though the four horsemen of the apocalypse just rode out of Trump Tower.”

The mood in early European trade was more measured, however.

“The initial reaction in markets was violent,” Saxo Bank head of FX strategy John Hardy said. “But if you look at it across markets you are seeing a pretty decent reversal off the spike.”

In the European morning, the impact was far weaker than the reaction to Britain’s vote to leave the European Union in June which wiped trillions of dollars off world markets.

U.S. stock futures were pointing to a drop of around a 2% for Wall Street later, less than half the 5% they had been warning of in Asian trade.

As FX markets reeled, South Korean authorities were thought to have intervened to steady their currency, and dealers wondered if central banks globally would step in to calm nerves.

Japan’s top currency diplomat signaled Tokyo’s readiness to intervene if necessary as the surging yen threatened to snuff out its fragile economic recovery.

The scale of the scare was clear in the Mexican peso, which plunged more than 13% against the dollar at one point in the biggest daily move in two decades. It was still down 9% by 9:45 a.m. GMT.

“A lot of Trump’s negative geopolitical rhetoric was concentrated around Mexico and trade with Mexico and tearing up the NAFTA agreement, so the peso just become this natural barometer of the election,” said Deutsche Bank EM FX Strategist Gautam Kalani. “What happens now though is all up in the air.”

The risk of a global trade war likewise hammered currencies across Asia, with the Australian dollar leading the rout.

Asian stocks took the biggest blows, with MSCI’s broadest index of Asia-Pacific stocks outside Japan falling 2.3% and the Nikkei in Tokyo closing down 5.4%.

A wealthy real-estate developer and former reality TV host, Trump rode a wave of anger toward Washington insiders to win the White House race against Clinton, the Democratic candidate whose gold-plated establishment resume included stints as a first lady, U.S. senator and secretary of state.

Markets had favored Clinton as a status quo candidate who would be considered a safe pair of hands at home on the world stage. Analysts had no such certainty about Trump whose powers could be bolstered by the Republican’s control of the Senate.

“With Brexit we had one bad day but this is different. This is what’s scary about putting the most powerful position in the world in the hands of a man who many believe is temperamentally unstable,” said Donald Selkin, chief market strategist at National Securities in New York.

“His tax cuts could open up a huge increase in the budget deficit and his trade sanctions could interrupt world trade. This could put us in a recession.”

Sovereign bonds flew ahead, pushing yields on 10-year U.S. Treasury notes down as much as 12 basis points to 1.75% at one point, again the largest drop since the Brexit vote, only to whip right back up 1.87% in European trade.

In commodity markets, safe-haven gold saw big swings too, initially climbing 3.5% to $1,320 an ounce as the dollar slid, but then sliding back to settle below $1,300.