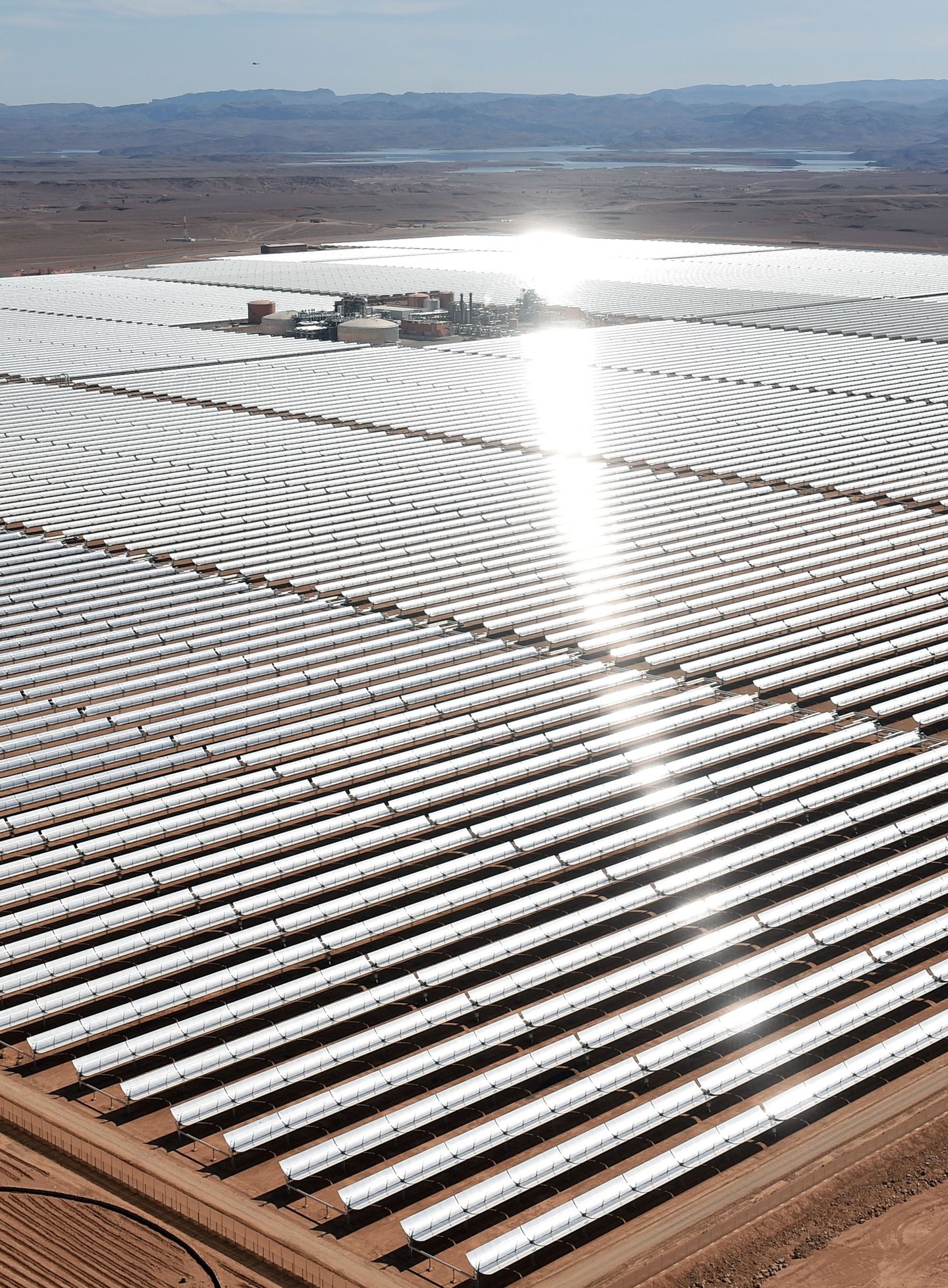 An aerial view of the solar mirrors at the Noor 1 Concentrated Solar Power (CSP) plant, some 20km (12.5 miles) outside the central Moroccan town of Ouarzazate on February 4, 2016. Noor 1 is one of the largest solar plants in the world, which is the first stage of a larger project designed to boost renewable energy production in Morocco. / AFP / FADEL SENNA (Photo credit should read FADEL SENNA/AFP/Getty Images)
FADEL SENNA AFP/Getty Images

On the edge of the Sahara desert, Morocco is building one of the world’s biggest solar power plants in a project largely funded by the European Union.

It is a hard success for other African nations to match as they seek to implement a new global deal to combat climate change.

The huge 160-megawatt first phase of the Noor plant near the town of Ouarzazate contrasts with efforts by some other nations focused on tiny roof-top solar panels to bring power to remote rural homes.

Morocco is showcasing Noor before talks among almost 200 nations in Marrakesh about implementing a global deal to combat climate change that entered into force on Nov. 4—a day when the Saharan sky was unusually overcast with spots of rain.

“We hope we can be an inspiration,” Mustapha Bakkoury, head of the Moroccan Agency for Solar Energy (Masen), told Reuters. Many African nations are pushing to boost economic growth to end poverty, while seeking greener energies.

Solar Power Capacity Tops Coal for the First Time Ever

The gleaming concentrated solar power plant is not economically competitive with cheaper fossil fuels, but is a step to develop new technologies as prices for solar power fall sharply.

“Unfortunately for many, it’s thought that renewables are to have a light bulb or light a school … This is to get away from the caricature of renewables,” Bakkoury said.

Once completed, Noor will cost 2.2 billion euros ($2.45 billion) and generate 580 MW, enough power for a city of almost 2 million people. Morocco aims to expand at other desert regions to 2 gigawatts of solar capacity by 2020 at a cost of $9 billion.

By contrast in East Africa, M-KOPA Solar has installed 400,000 tiny rooftop solar panel systems costing $200 each on homes in the past five years to provide power for light bulbs and a radio. That completely by-passes the grid.

M-KOPA Chief Executive Jesse Moore, whose company focuses most on Kenya, Tanzania and Uganda, said rooftop solar systems were a breakthrough for Africa, where half the 1.2 billion people lack electricity.

He noted that Tesla founder Elon Musk was trying to sell solar systems to U.S. homes.

“Elon Musk is trying to get people to leap off the grid in California. Over here on the other side of the planet this is happening already,” he told Reuters.

Unlike Morocco, some nations in Africa find it hard to attract investors to green projects, part of global efforts to limit climate change and more floods, heat waves and droughts that are a big threat to Africa.

“Morocco is particularly suited for a large-scale project. It may not be suitable for all other countries,” Roman Escolano, vice president of the European Investment Bank (EIB), told Reuters.

For more on Solar energy, watch:

The European Union including the EIB has funded about 60% of Noor. Masen issued Morocco’s first green bond, of 106 million euros, on Friday to help finance Noor.

Apart from sunshine, Morocco has had relative political stability in recent years and a predictable legal and banking system, helping it attract investors.

Even so, Morocco has had a week of street protests after the death of a fishmonger, crushed to death in a garbage truck in a confrontation with police, in one of the biggest and longest challenges to authority since the 2011 Arab Spring.

Unusually for a desert, Morocco has water from the Atlas mountains to help clean off dust. And in some countries, power lines from remote parts of the Sahara could be vulnerable to attacks—Noor’s pylons have red spikes to discourage intruders.

At Noor, the sun’s rays bounce off the mirrors, heat a fluid that in turn heats a vast tank of molten salt that can drive a turbine to generate electricity even after dark.