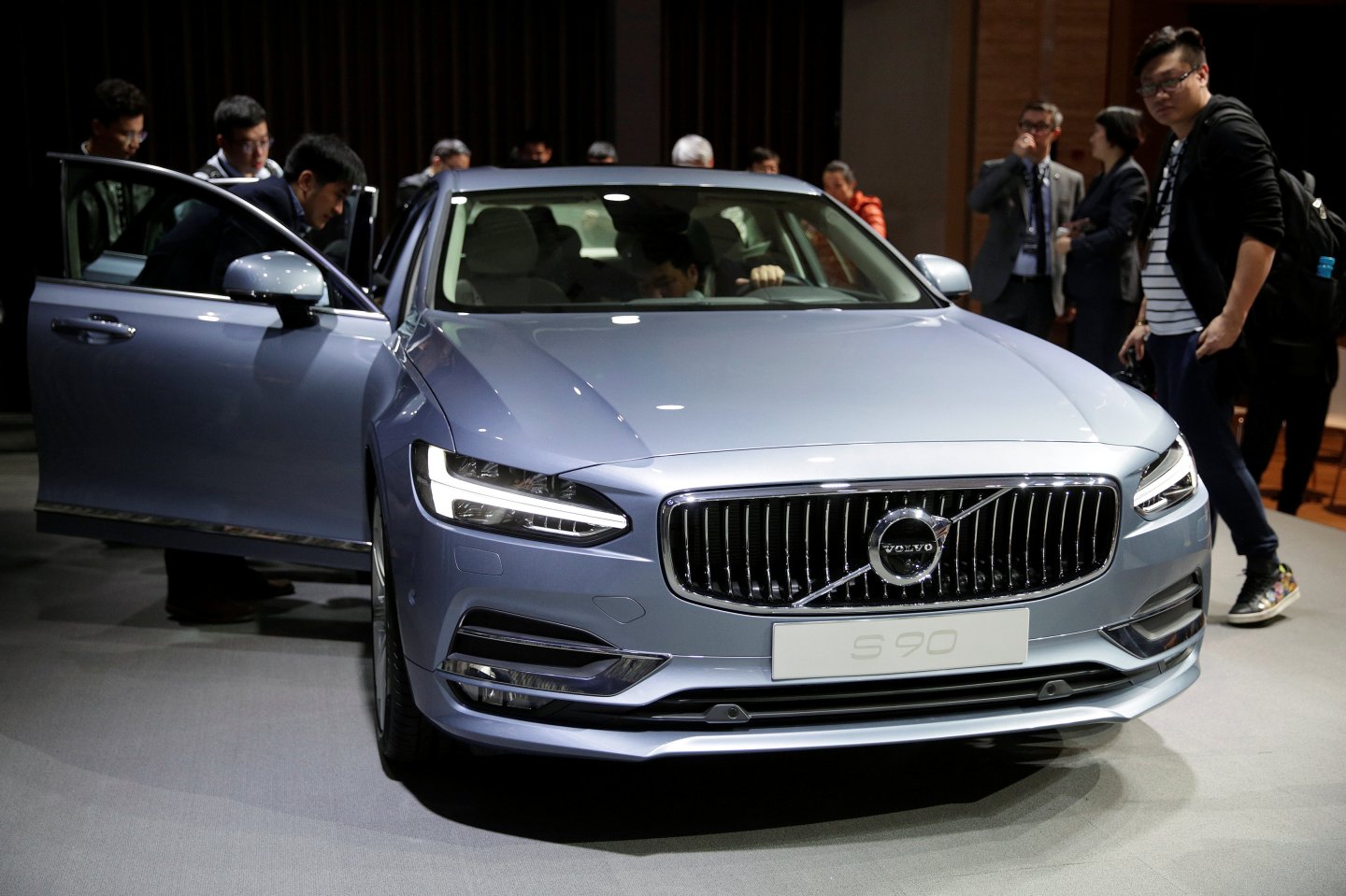 The plant, operated by Volvo (VOLVY) and expected to start gradually ramping up production this quarter, will produce compact cars based on an “advanced” vehicle architecture the two companies have jointly developed in Sweden. Both Volvo and Geely are expected to produce small cars at the plant based on that Compact Modular Architecture (CMA) platform – for both domestic and export markets.

Volvo is trying to create “synergies and economies of scale,” Samuelsson said in Shanghai on Wednesday, “by sharing development-intensive components: engines, transmissions, suspension parts and brakes,” and by sharing manufacturing facilities.

The effort won’t “dilute” or “jeopardize” the identities of the two car brands, he said.

On Wednesday, Volvo also unveiled two stretched variants of its recently launched large S90 premium sedan, including the S90 Excellence. It will build both S90 variants at its assembly plant in Daqing in northeastern China, for sale in China and abroad.

The new sedan comes with a built-in refrigerator and handmade crystal glassware, according to Bloomberg. One version of the car, said to be targeting China’s affluent upper middle class, who tend to have drivers, has removed the front passenger seat.

“Only by being distinctive can it be competitive in the market,” Chairman Li told The Wall Street Journal.

Samuelsson and other Volvo officials said Volvo will make China a global production hub for the S90 and its long-wheel base variants. While some production of those cars will likely remain in Europe the company over time will produce in China a majority of those cars it sells globally.

The Taizhou plant will be Volvo‘s third assembly site in China, along with Daqing and one in Chengdu in western China. The car maker also has two plants in Europe, and is building a new plant in South Carolina in the United States.

Geely raised auto industry eyebrows when it bought Volvo from Ford for $1.8 billion six years ago. Few saw any obvious synergies in marrying a premium Western marque with a Chinese entry brand.

But the two appear to be making it work.

Cooperating on buying parts, developing technologies and boosting capacity, sales of both brands have risen.

Volvo increased its third-quarter sales in both China and the United States by more than a fifth, and July-September operating profit jumped 62% to 2.07 billion Swedish crowns ($232.5 million).

Geely sold more than half a million cars last year, up 22%, and sales in the first nine months of this year were already at nearly 460,000 cars.

“Moving production from Sweden to China, and sharing manufacturing processes and components has been a positive for both Geely and Volvo from a cost savings perspective,” said James Chao, Asia-Pacific chief for consulting and research firm IHS Markit Automotive.

“It makes sense especially as they upgrade the Geely product line-up with the new Lynk brand, as well as through tangible product improvements, which should help protect the Volvo brand from association with a lower cost brand.”

Geely said this month it will use the jointly developed compact car CMA platform for a new brand called Lynk & Co, which will begin production next year for the Chinese market and start exporting to Europe and the United States in 2018.

Chao at IHS said that despite the signs of progress in the partnership, the process of integrating Volvo has been slower than he expected. “So far, I’d grade it a ‘B’,” he said.

Geely insiders acknowledge that Volvo wants to keep some distance between the two brands, fearing that too close a manufacturing tie-up could risk diluting its premium image.

And, the insiders note, there is still some disconnect as to just how premium Volvo‘s premium cars should be for the Chinese market, with Geely Chairman Li said to want a more upscale model to compete with BMW, Audi, Mercedes-Benz.

A Volvo spokesman said there is no disagreement on the need for a large premium sedan forVolvo. “The S90 large sedan is an area we need to move into in order to be credible in the premium sector,” the spokesman said.