Here’s Why Shares of Lumber Liquidators Are Tanking 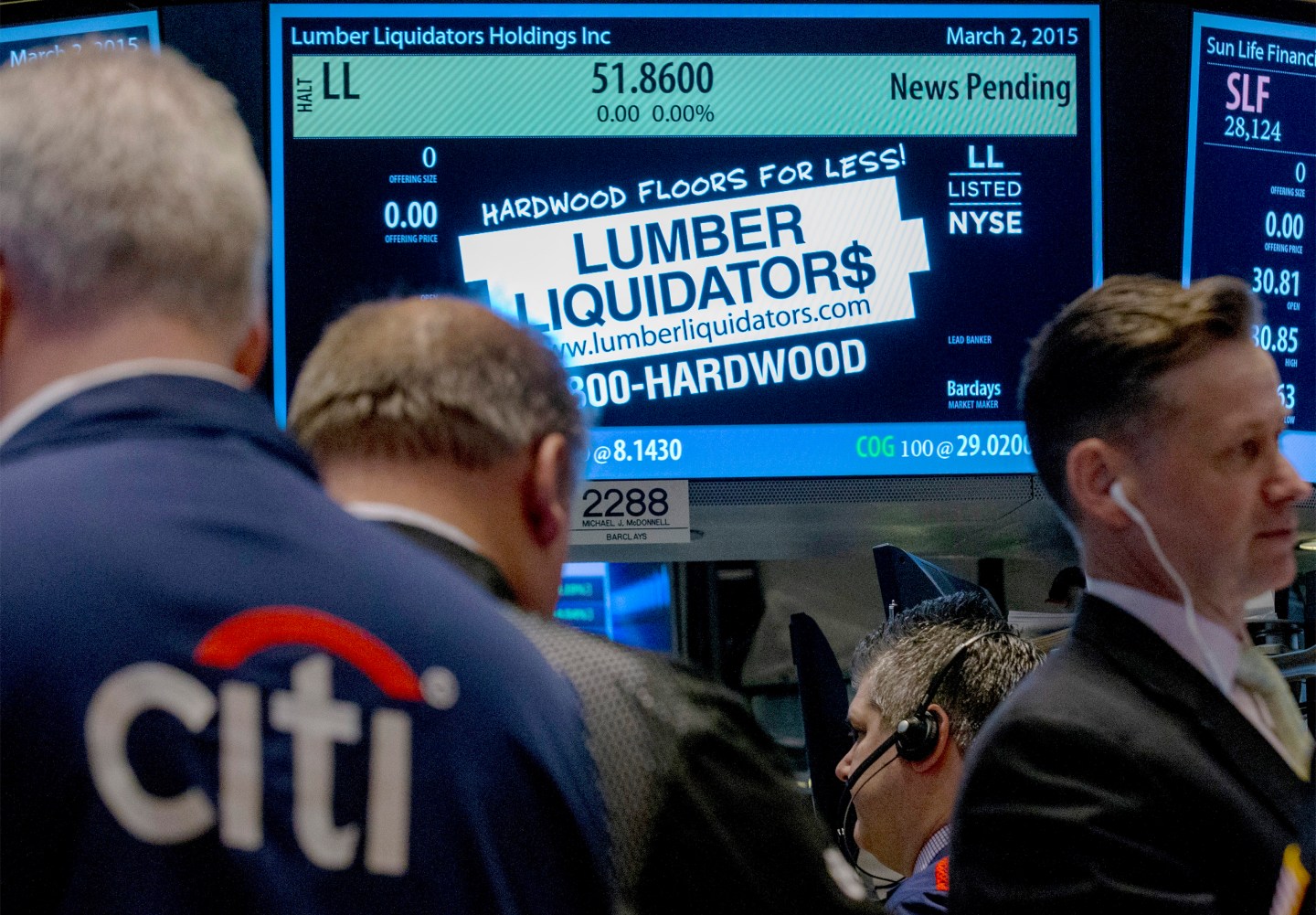 Despite sales growth for the first time in six quarters, shares of Lumber Liquidators cratered 16% in trading Monday as the company continues to struggle with legal fees.

During its third quarter, the hardwood floor-maker reported larger losses than expected as a result of ongoing legal woes in relation to allegations that some of its Chinese-made laminate flooring included formaldehyde, potentially toxic chemical that has been linked to cancer.

The company reported net losses of $18.4 million, or 68 cents per share, which was up 54% from the same quarter a year earlier. Analysts anticipated a 19 cents per shares loss at the time.

The increase in losses was partially due to the company’s $4.3 million charge in relation to a securities class action lawsuit. That lawsuit alleged that Lumber Liquidators misled investors and made false statements about the company’s laminate flooring.

Sales though rose 3.4% to $244.1 million from a year ago, and beat analysts’ estimates of $231.6 million—suggesting that consumers are beginning to put the company’s scandal behind them.

Lumber Liquidators (LL) has been struggling since November 2013, when short seller Whitney Tilson revealed a short position in the company. Company shares continued to spiral after an episode of CBS’s 60 Minutes in March 2015 suggested some of the company’s products contained formaldehyde. Its woes only deepened when the Centers for Disease Control and Prevention confirmed that at least some of its laminate flooring from China could cause cancer.

Since then, the firm has agreed to stop selling the Chinese-made laminate flooring, while the Consumer Product Safety Commission ended its probe into the company’s flooring without issuing a recall in June—giving hope to some consumers that a comeback may be possible.

But the company is still facing other lawsuits in relation to its Chinese laminate flooring. Lumber Liquidators is hoping to consolidate all cases related to the flooring to be transferred to the U.S. District Court for the Eastern District of Virginia, and consolidated under the case, IN RE: Lumber Liquidators Chinese-Manufactured Flooring Products Marketing, Sales, Practices and Products Liability Litigation.

Shares of Lumber Liquidators have tanked 87% since its all time high in November 2013, and shed over half of its value since the CBS (CBS) report was aired in March of 2015.