Thousands of South Korean Protesters Call for President to Resign 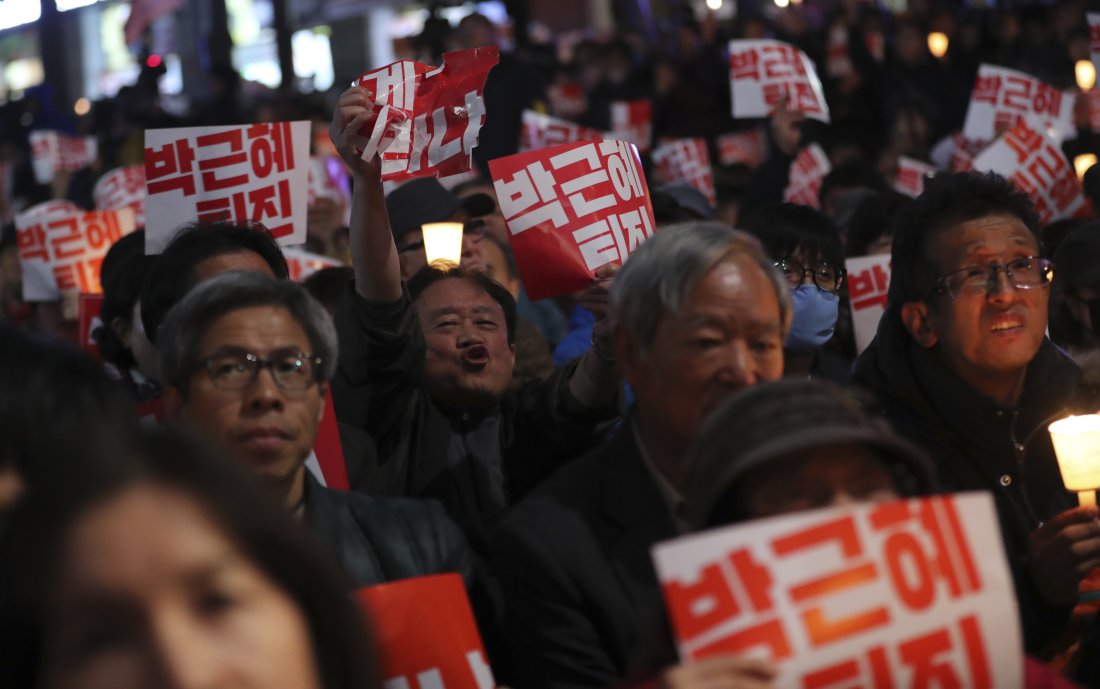 South Koreans hold signs during a rally calling for President Park Geun-hye to step down in downtown Seoul, South Korea, Saturday, Oct. 29, 2016. Thousands of South Koreans took to the streets of the capital on Saturday calling for increasingly unpopular President Park Geun-hye to step down over allegations that she let an old friend, the daughter of a religious cult leader, interfere in important state affairs. The letters read "Park Geun-hye step down." (AP Photo/Lee Jin-man)
Lee Jin-man AP

Thousands of South Koreans took to the streets of the capital on Saturday calling for increasingly unpopular President Park Geun-hye to step down over allegations that she let an old friend, the daughter of a religious cult leader, interfere in important state affairs.

The evening protest came after Park ordered 10 of her senior secretaries to resign over a scandal that is likely to deepen the president’s lame duck status ahead of next year’s election.

Holding candles and signs reading “Who’s the real president?” and “Park Geun-hye step down,” the protesters marched through downtown Seoul after holding a candlelight vigil near City Hall. Police estimated that about 9,000 people turned out for the biggest anti-government demonstration in Seoul in months.

“Park has lost her authority as president and showed she doesn’t have the basic qualities to govern a country,” Jae-myung Lee, from the opposition Minjoo Party and the mayor of the city of Seongnam, told the protesters from a stage.

Park has been facing calls to reshuffle her office and Cabinet after she acknowledged on Tuesday that she provided longtime friend Choi Soon-sil drafts of her speeches for editing. Her televised apology sparked intense criticism about her mismanagement of national information and a heavy-handed leadership style that many see as lacking in transparency.

There’s also media speculation that Choi, who holds no government job, meddled in government decisions on personnel and policy and exploited her ties with Park to misappropriate funds from nonprofit organizations.

Prosecutors on Saturday widened their investigation by searching the homes of presidential officials suspected of interacting with Choi and receiving their office files from the Blue House—the presidential office and residence. Prosecutors had previously summoned some of Choi’s key associates and raided their homes and workplaces, as well as the offices of two nonprofit foundations Choi supposedly controlled.

The saga, triggered by weeks of media reports, has sent Park’s approval ratings to record lows, and the minority opposition Justice Party has called for her to resign. The Minjoo Party, a larger opposition party that has refrained from calling for Park’s resignation over fears of negatively affecting next year’s presidential election, said Park’s decision to shake up her secretariat was too little, too late, and called for stronger changes, including the reshuffling of her Cabinet.

Woo has been blamed for failing to prevent Choi from influencing state affairs and has also been embroiled in separate corruption allegations surrounding his family.

Ahn, whose home was searched by prosecutors on Saturday, is under suspicion that he helped Choi pressure South Korean companies into making large donations to the Mir and K-Sports foundations, launched in October last year and January this year, respectively. Choi reportedly masterminded the creation of the two nonprofits, which managed to gather around $70 million in corporate donations over a short period of time, and is suspected of misappropriating some of the funds for personal use.

For more on Asia, watch:

Choi’s lawyer Lee Gyeong-jae said that she was currently in Germany but would return to South Korea if prosecutors summon her. In an interview with a South Korean newspaper earlier in the week, Choi acknowledged receiving presidential documents in advance, but denied intervening in state affairs or pressuring companies into donating to the foundations.

Choi and Park reportedly became friends in the 1970s, when Choi’s late father, Choi Tae-min, a shadowy religious figure who was a Buddhist monk, cult leader and Christian pastor at different points of his life, emerged as Park’s mentor.

At the time, Park was serving as acting first lady after her mother was killed in 1974 by a man trying to assassinate her father, military strongman Park Chung-hee, who would be murdered by his own spy chief five years later.