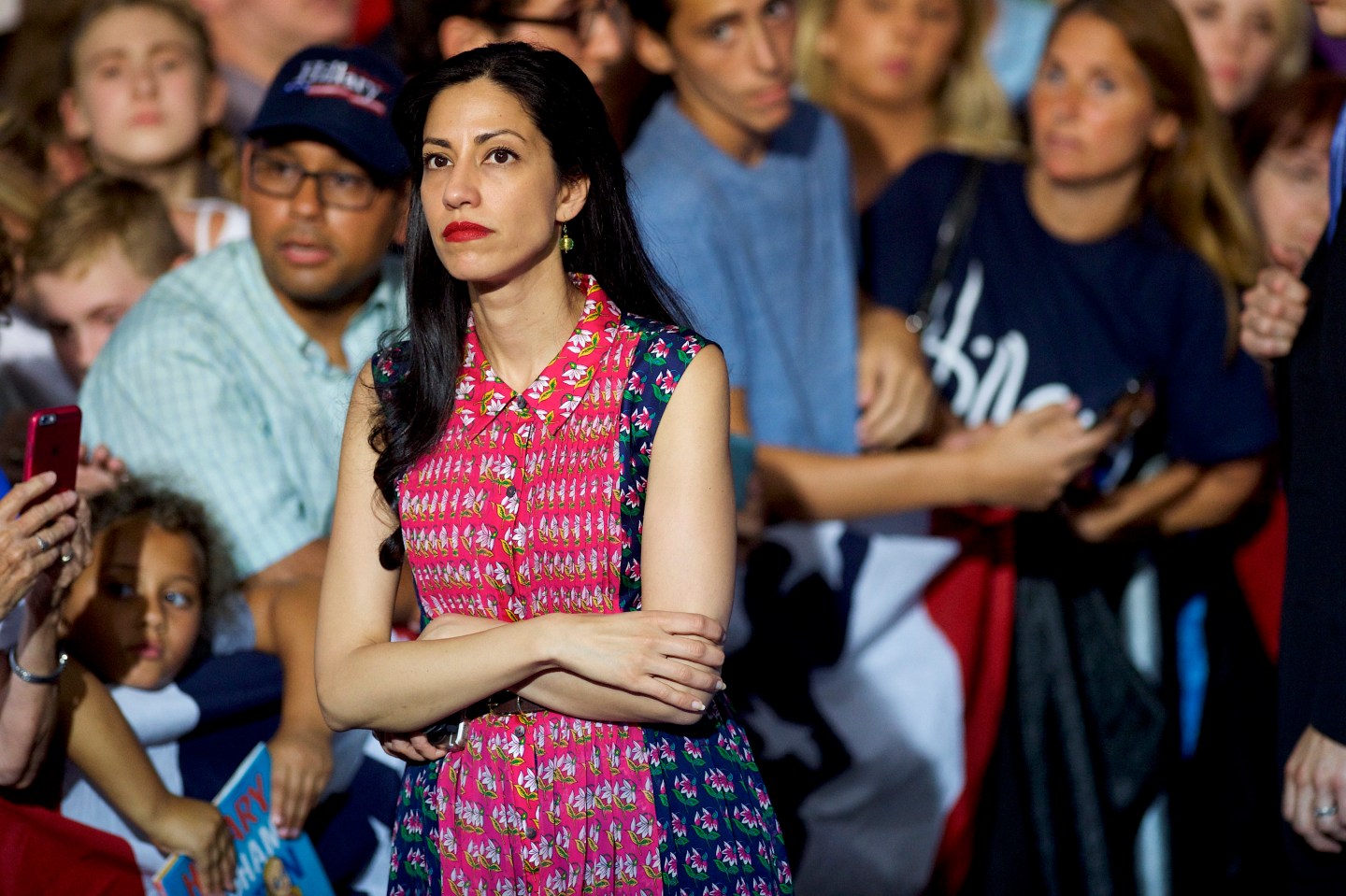 The longtime Hillary Clinton aide at the center of a renewed FBI email investigation testified under oath four months ago she never deleted old emails, while promising in 2013 not to take sensitive files when she left the State Department.

FBI Director James Comey notified Congress on Friday, less than two weeks before the election, that the emails had led agents to re-examine whether classified information was mishandled. That had been the focus of the bureau’s earlier criminal inquiry into the former secretary of state’s use of a private email server, which Comey said in July didn’t warrant charges.

The newly discovered emails were on a device seized during a sexting investigation of disgraced former New York congressman, Anthony Weiner, the estranged husband of Huma Abedin, one of Clinton’s closest aides.

Abedin’s testimony in a recent civil lawsuit about State Department records may help explain why agents found emails that Comey said “appear to be pertinent” and would be reviewed “to determine whether they contain classified information, as well as to assess their importance to our investigation.”

For more on Clinton’s emails, watch:

Abedin told lawyers in June in a deposition that, like millions of internet users who don’t manage their inboxes, she simply never deleted old emails, either at work with Clinton or at home with Weiner.

“I didn’t have a practice of managing my mailbox other than leaving what was in there sitting in there,” Abedin said. “I didn’t go into my emails and delete State.gov emails. They just lived on my computer. That was my practice for all my email accounts. I didn’t have a particular form of organizing them. I had a few folders, but they were not deleted. They all stayed in whatever device I was using at the time or whatever desktop I was on at the time.”

Abedin, vice chairwoman of Clinton’s presidential campaign, and Weiner separated this year after Weiner was caught in 2011, 2013 and again this year sending numerous woman sexually explicit text messages and photographs of himself undressed. Federal authorities in New York and North Carolina are investigating online communications between Weiner and a 15-year-old girl.

Abedin’s testimony in the civil suit was complicated by a routine State Department document she signed under penalty of perjury in February 2013. She promised she would “turn over all classified or administratively controlled documents and materials” before she left her government job, and promised that she was not retaining copies, “including any diaries, memorandums of conversation or other documents of a personal nature.” The document required her to give back all “unclassified documents and papers relating to the official business of the government acquired by me while in the employ of the department.”

Comey’s announcement Friday—just months after deciding that anyone’s use of Clinton’s private email server didn’t rise to criminal charges for mishandling or removal of classified information—upended the presidential campaigns in their final stretch before the Nov. 8 voter.

Clinton urged the FBI to “explain this issue in question, whatever it is, without any delay.” Even within the Justice Department, officials advised Comey not to make the announcement.

Upon learning of Comey’s plans to send the letter to Congress, Justice Department officials told FBI officials that was not a good idea and cautioned against it, according to a government official familiar with the discussions. The official was not authorized to publicly discuss the private conversations and spoke on condition of anonymity.

The official said the Justice Department had warned the FBI that the letter was inconsistent with department policy intended to avoid the appearance of prosecutorial influence in elections.

The position is laid out in a 2012 memo from then-Deputy Attorney General James Cole. It said prosecutors may never select the timing of criminal charges or investigative actions in a way that can be seen as affecting an election or giving a benefit or disadvantage to a candidate.

The memo says that although the department has a strong interest in prosecuting election-related crimes, such as those involving campaign finance and patronage, employees must remain committed to fairness and political neutrality. “Simply put, politics must play no role in the decisions of federal investigators or prosecutors regarding any investigations or criminal charges,” the memo states.

Comey told FBI employees later Friday he wanted to avoid creating “a misleading impression,” but believed he was obligated.

“We don’t ordinarily tell Congress about ongoing investigations, but here I feel an obligation to do so given that I testified repeatedly in recent months that our investigation was completed.” Comey wrote in a letter to staff. “I also think it would be misleading to the American people were we not to supplement the record.”