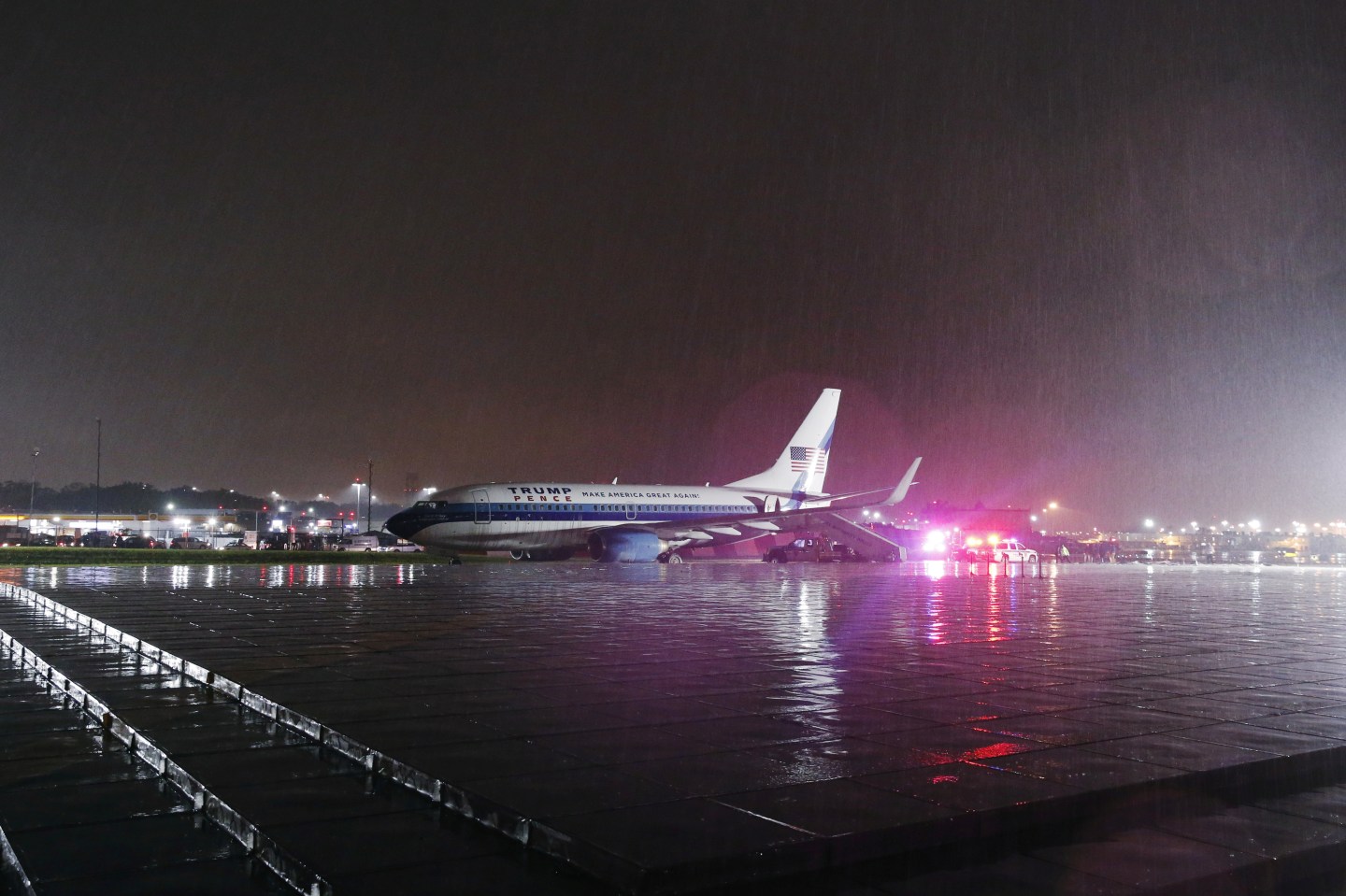 A campaign plane that had been carrying U.S. Republican vice presidential candidate Mike Pence rests in the grass after it skidded off the runway while landing in the rain at LaGuardia Airport in New York, U.S.,October 27, 2016. REUTERS/Lucas Jackson - RTX2QSA7
Lucas Jackson — Reuters

The runways at LaGuardia have always been an issue—at least in the public’s mind. They are shorter than most runways at large airports in major metropolitan areas and they lead to either a body of water or dense civilization. Jerry Seinfeld even lampooned the airport’s unnerving runway setup on SNL. How unsafe the airport’s runways actually are is debatable, but Republican Vice Presidential candidate and Indiana Governor Mike Pence, along with his entourage, will probably agree with the naysayers after experiencing a terrifying incident Thursday night when their 737-700 campaign plane skidded off the end of LaGuardia’s Runway 22. What likely saved them from a much more horrific outcome is a fairly obscure but proven airport technology called the Engineered Material Arresting System, or EMAS for short.

The concept behind EMAS is fairly simple. Instead of putting asphalt before the thresholds of runways, the area is covered with a stretch of thousands of brittle, concrete-like blocks meant to collapse when the weight of an aircraft’s landing gear bears down on them. The plane’s gear continues to ride through the blocks, dramatically slowing the aircraft’s speed in a very short distance. The technology is especially relevant for airports with short runways and limited overrun areas.

The FAA describes the genesis of EMAS, its effectiveness and what it is made out of:

“The FAA began conducting research in the 1990s to determine how to improve safety at airports where the full RSA cannot be obtained. Working in concert with the University of Dayton, the Port Authority of New York and New Jersey, and the Engineered Arresting Systems Corporation (ESCO) of Logan Township, NJ, a new technology emerged to safely arrest overrunning aircraft. EMAS uses crushable material placed at the end of a runway to stop an aircraft that overruns the runway. The tires of the aircraft sink into the lightweight material and the aircraft is decelerated as it rolls through the material.

The EMAS technology improves safety benefits in cases where land is not available, or not possible to have the standard 1,000-foot overrun. A standard EMAS installation can stop an aircraft from overrunning the runway at approximately 80 miles per hour. An EMAS arrestor bed can be installed to help slow or stop an aircraft that overruns the runway, even if less than a standard RSA length is available.”

“As of October 2014, there are two manufacturers of EMAS products that meet the FAA requirements…EMASMAX is the latest, most durable version of ESCO’s EMAS, developed with and technically accepted by the FAA. EMASMAX arrestor beds are composed of blocks of lightweight, crushable cellular cement material designed to safely stop airplanes that overshoot runways.

Runway Safe EMAS is a foamed silica bed which is made from recycled glass and is contained within a high-strength plastic mesh system anchored to the pavement at the end of the runway. The foamed silica is poured into lanes bounded by the mesh and covered with a poured cement layer and treated with a top coat of sealant. Both EMAS products are located at the end of the runway and are typically the full width of the runway. The length depends on the airport configuration and the aircraft fleet using the airport.”

As of February of 2016, ESCO’s EMAS, the most prolific of the two suppliers, has been installed on over 103 runway ends at 61 airports in the US, according to the FAA. Those installations have saved at least ten aircraft filled with a total of 245 souls.

LaGuardia was a ripe candidate for EMAS and has had some of its runways equipped with the system since the 2005, one of which Pence’s 737 made use of Thursday evening. Extensions were made to the airport’s water-side runway thresholds in early 2015 and they too feature EMAS systems now.

Other new technologies, like Airbus’s Runway Overrun Prevention System (ROTS), have the potential to drastically reduce runway overruns in the future. ROTS offers increased situational awareness and automation for pilots during landing, and is preventative in nature. Such a system, along with more EMAS installations at airports with short runways and small overrun areas, could massively reduce the regularity of these types of incidents, and the severity of their impact when they do occur.

So there you have it, even with all of the armored SUVs and secret service agents, America’s next potential Vice President appears to have been saved, or at least partially saved, by a little noticed but increasingly critical aerospace technology—rows of thousands of frangible blocks.

This article originally appeared on TheDrive.com.