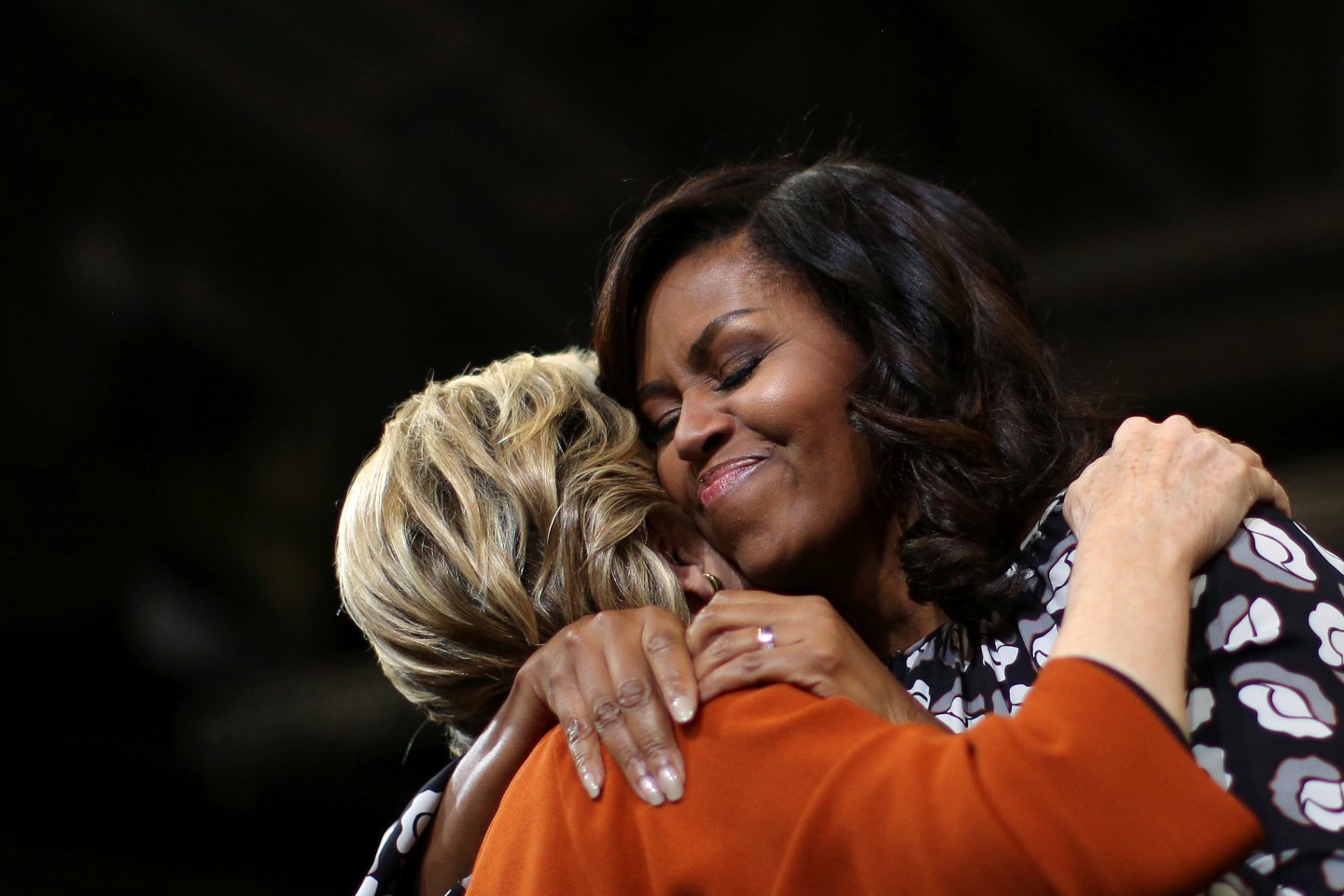 Trump denounced both Hillary and Bill Clinton as creatures of a corrupt political system, who would use another pass at the Oval Office to enrich themselves at the expense of American families. He faces a sizable fundraising deficit that could cripple his last-ditch electoral efforts.

Mrs. Obama, one of Clinton’s most effective surrogates, passionately touted Clinton’s experience and denounced Trump as too divisive and thin-skinned for the White House.

“We want someone who is a unifying force in this country, someone who sees our differences not as a threat but as a blessing,” Mrs. Obama said as she addressed an enthusiastic, 11,000-person crowd in Winston-Salem, one of Clinton’s biggest gatherings of her campaign. Trump often points out that his crowds are generally larger than his rival’s.

Mrs. Obama also accused Trump’s campaign of trying to depress voter turnout and panned his provocative assertion that the results of the Nov. 8 contest may be rigged.

“Just for the record, in this country, the United States of America, the voters decide elections,” the first lady said. “They’ve always decided.”

With a lead in polling for weeks, Clinton’s campaign is concerned that her advantage could prompt some of her backers to stay home on Election Day or cast protest votes for a third-party candidate. Nearly all of her recent events have been in states where early voting is already underway, aimed at using the rallies to prompt supporters to bank their votes now.

Trump seized on newly public emails in which longtime Bill Clinton aide Doug Band describes overlapping relationships of the Clintons’ global philanthropy and the family’s private enrichment. The emails were among thousands stolen from the private account of a top Clinton aide, part of a hacking the Democratic campaign has blamed on the Russians.

“Mr. Band called the arrangement ‘unorthodox.’ The rest of us call it outright corrupt,” Trump declared during a rally in Springfield, Ohio. “If the Clintons were willing to play this fast and loose with their enterprise when they weren’t in the White House, just imagine what they’ll do in the Oval Office.”

Clinton entered the final stretch of the race with a resounding cash advantage over Trump: As of last week, her campaign and Democratic partners had $153 million in the bank, more than double what Trump’s side had available.

New campaign finance reports also show Trump seems to have cut off his personal contributions. While he had routinely given about $2 million a month, as of Wednesday, he’d covered $33,000 in October campaign costs, giving nothing more—and putting him $44 million short of the $100 million overall he has repeatedly vowed to give.

Meanwhile, Trump running mate Mike Pence’s plane skidded off a rainy runway at New York’s LaGuardia Airport Thursday night, forcing a partial shutdown of one of the nation’s busiest airports. No one was injured and the incident was under investigation.