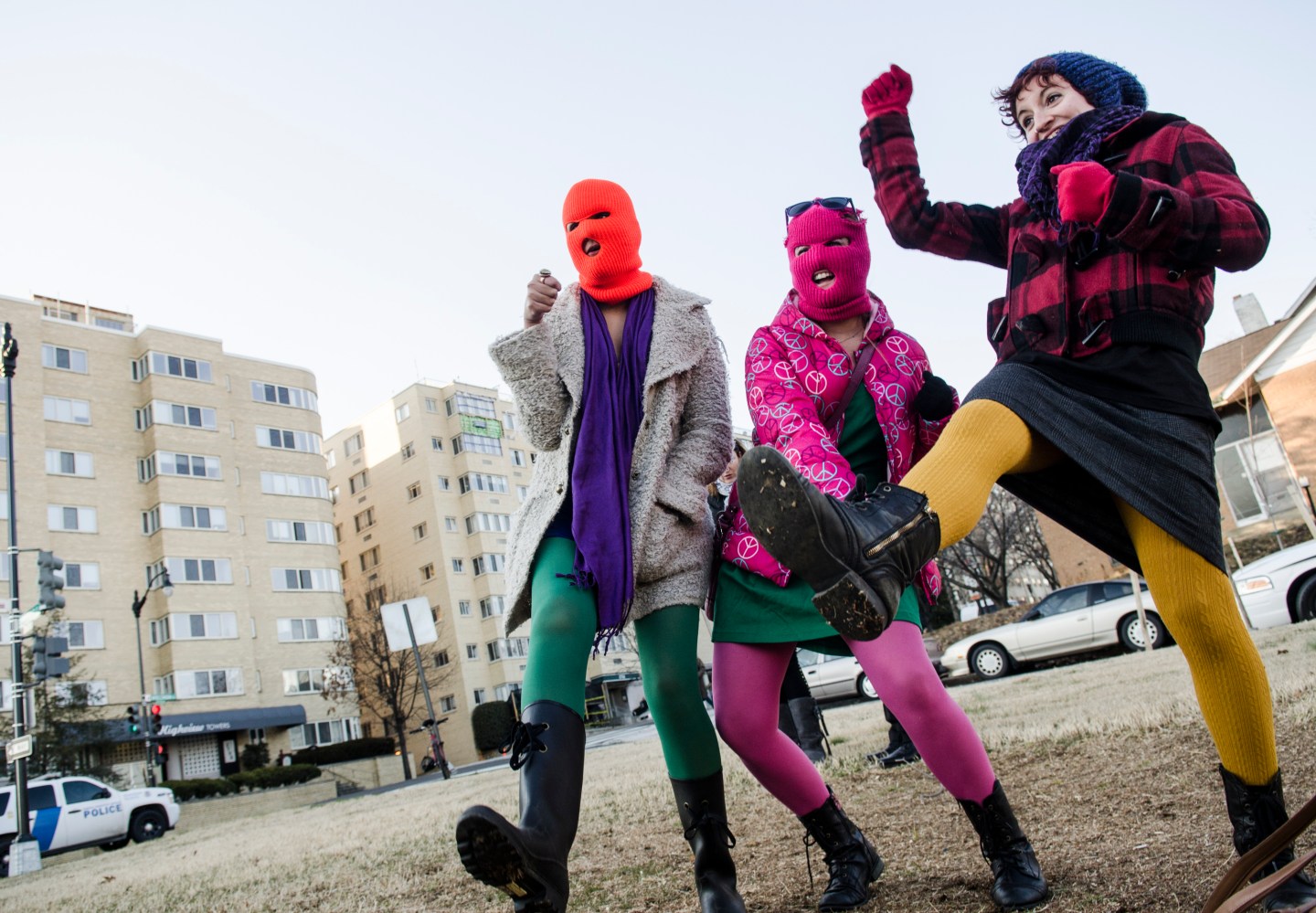 Pussy Riot doesn’t typically pull any punches. But when the group’s co-founder, Nadezhda Tolokonnikova, set out to produce a song about Donald Trump this spring, she decided to leave the obscenities out of her lyrics for a change. The calculation, she says, was political. She and the rest of her Russian punk collective wanted to appeal to as many American voters as possible, even the ones who might be offended by a few dirty words.

“Of course we wanted to just say, ‘F—k Trump,” Tolokonnikova told TIME ahead of Thursday’s release of the new single, Make America Great Again. “But we didn’t do that. We wanted to get our message across to people who might not be as aesthetically radical as we are at Pussy Riot.” (Warning: The new Pussy Riot video contains graphic images and may be upsetting to some people.)

It isn’t the first time the group has tried to sway an election. The video that first made them famous in 2012 took aim at Russian President Vladimir Putin while he was in the middle of his re-election campaign that year, and it got Tolokonnikova and one of her band mates, Maria Alyokhina, sentenced to two years in prison on charges of felony hooliganism.

Pussy Riot’s introduction to American politics came soon after their release from the Russian labor camps. During a trip to New York in 2014, they had a meeting with Hillary Clinton during the Women of the World Summit. Their discussion mainly focused on gender issues, and the former secretary of state praised Pussy Riot for the bravery of their activism in Russia. But the admiration was not entirely mutual. Though best known for her defense of women’s rights and the LGBT community, Tolokonnikova is also a devoted leftie, so she hoped the Democratic Party’s nomination would go to Senator Bernie Sanders. “Let’s just say his policies appealed to me more,” she says. “But it’s not good to talk about that now. It’s a harmful conversation.”

She prefers to focus instead on the dangers of Trump becoming the U.S. president—a prospect that her latest production depicts in thoroughly dystopian terms. At least by Pussy Riot standards, the lyrics are mild—“Stop killing black children” might be the closest thing to a scandalous line—but the imagery isn’t nearly as subtle. Under the imagined Trump regime, American police are shown morphing into a version of the Gestapo, using a hot poker to burn Tolokonnikova’s supposed transgressions into her skin before torturing, raping and shooting her dead.

“The point was to show that Trump’s words are not just words,” she says. “Those words lead to violence, which is why they were burned into my body.”

Produced in May, the video for Make America Great Again — directed by Jonas Åkerlund — is part of a trilogy that Pussy Riot has been working on for most of this year. The other two clips, also released this week, include Organs, a blood-spattered dissection of power politics in Putin’s Russia, and Straight Outta Vagina, a romping feminist dance track that many observers chose to interpret as another take-down of Donald Trump.

Considering the candidate’s now-infamous remarks from 2005 about his fame being a license to “grab ’em by the pussy,” that interpretation seems fair enough to Tolokonnikova—just as long as it hurts Trump’s chances of occupying the Oval Office. “We already have a macho president in Russia,” she says. “We don’t need a world where the American president is also a macho.”

And even though she can’t cast a ballot in the U.S. herself, Pussy Riot’s clout among young voters might just help swing the results in Clinton’s favor. “What you Americans call the millennials,” she says, account for some 75 million eligible voters in the U.S., and Clinton has struggled to inspire their enthusiasm. As an early supporter of Sanders, Tolokonnikova can understand why. “But I think a lot of people who supported Sanders and now refuse to vote for Hillary, they are making the same mistake that a lot people in Russia are making,” she says. “They sit around waiting for the arrival of a messiah who will make everything alright. But that’s not how it works.”

Whatever the flaws in Clinton’s policies, she has been willing to swing to the left during this campaign and adopt at least some of Sanders’ rhetoric. That in itself was enough to earn the endorsement Pussy Riot, and Clinton’s much-vaunted diligence also helped. When the group attended a Clinton Foundation event in 2015, Hillary came up to them and exclaimed, “My favorite Russian feminists!”

Tolokonnikova found this a little suspicious. “I highly doubt she really remembers who we are,” she says. “But she has assistants who show her little cue cards and say, ‘Hey, those are the Russian feminists.’ And that’s great. That means she’s well prepared.” Once they see the latest clip from Pussy Riot, maybe those assistants will even send a thank-you card.