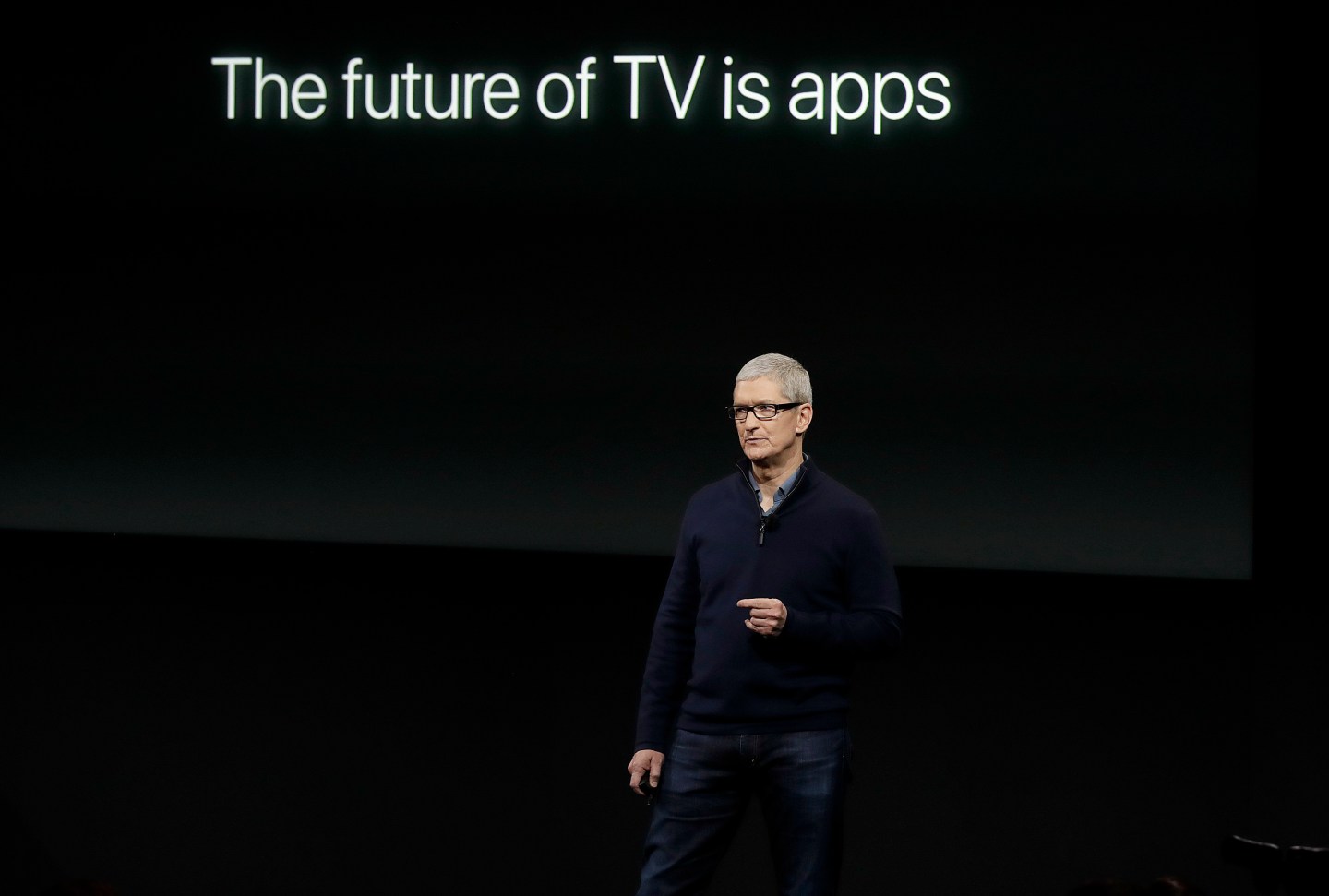 Among the new announcements at Apple’s big news event on Thursday was an all-in-one app for browsing through various TV apps and services on Apple devices in order to find something to watch.

But there were a few things missing from the new service.

As demonstrated onstage from Apple headquarters in Cupertino, Calif., the new Apple TV app allows users to search for and/or scroll through every TV show, movie, and other type of video content that is available to watch via an Apple TV box, iPhone, or iPad.

“Today we’re announcing a new app, and we simply call it TV,” said Apple CEO Tim Cook. “It will completely change how you watch TV on your Apple TV as well as your iPhone and iPad.”

The demo also showed how a user could ask Siri, Apple’s smart assistant software, to find something playing either by keyword or by channel/provider. Once selected, the app switches to whatever app or service is playing that content.

As an all-in-one service for finding video to watch, the app looked fairly impressive. But it has two rather large holes in it: It doesn’t allow you to search for shows that are available on either Netflix (NFLX) or on Amazon’s Prime Video (AMZN).

In fact, the names Netflix and Amazon were never mentioned during the presentation. Presumably that’s because neither wanted to be part of Apple’s new offering, or Apple (AAPL) didn’t want them. In an email to Fortune, a Netflix spokesman said the company was not part of the new offering, but was “evaluating the opportunity.”

From Netflix’s point of view, being just another source of video content for the Apple TV doesn’t offer much upside. At the moment, it is the go-to place for millions of consumers who want to binge-watch shows like Narcos and Stranger Things. It doesn’t really need Apple TV’s help.

Amazon, meanwhile, is a head-on competitor with Apple for the TV-watching market. The Apple TV’s features are very similar to what Amazon offers via its Amazon Fire USB stick.

Although some have reported that Apple gave up on its plans to create a full-fledged, cable-style streaming video service in favor of pushing the new browsing feature, there are still those who believe the company is working on a cable replacement, including Sanford Bernstein analyst Toni Sacconaghi.

Those plans are the main reason why an acquisition of Netflix wouldn’t make sense for Apple, Sacconaghi said in a recent report. It would be much cheaper for the company to just create its own.

Google (GOOGL) and Apple have both been working on cable-style streaming services for several years now, but they have been stymied by an inability to get major providers to sign on at a price that would make their proposed services compelling.

That logjam broke recently, however, when CBS (CBS)—which has been one of the major holdouts against an Apple partnership in the past—said that it had agreed to work with Google on its service, which is expected to launch next year under the name Unplugged.