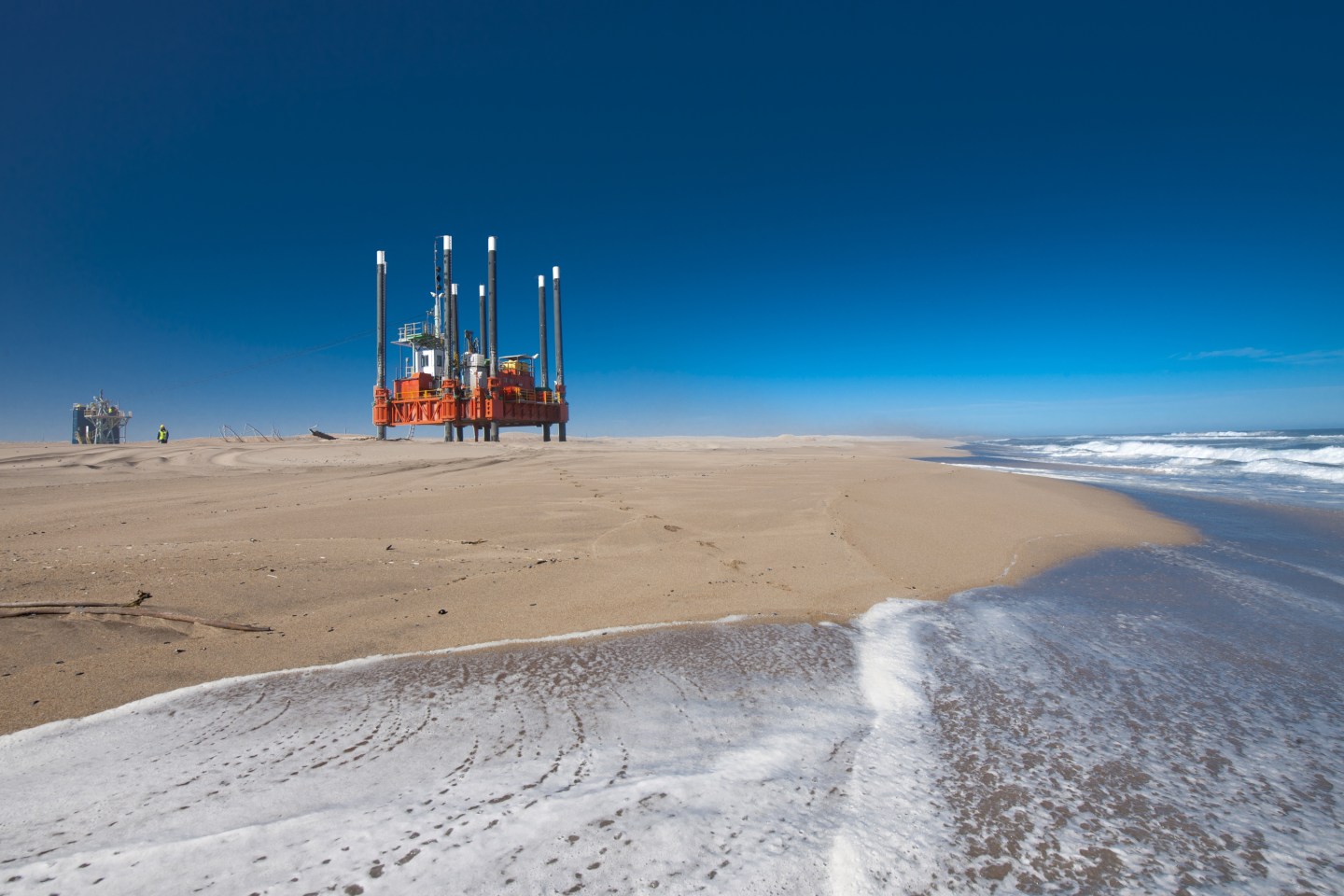 Much has been written about “blood diamonds” and how these precious jewels fuel lawlessness and vicious feuds in parts of Africa. But, many of the world’s most valuable raw diamonds travel a much less violent pathway to market. They take a 90 million year waterborne journey, starting from a riverbank in inland South Africa and eventually wash ashore on the pristine Atlantic coastline of Namibia. There is no more tranquil, low-tech nor more valuable mining going on anywhere in the world. Diamonds are collected off the beach like seashells, as The Wall Street Journal highlighted in an article last week.

Sound far-fetched? If I hadn’t been there myself, I would have said the same. I’m one of the relatively few outsiders allowed into the “Forbidden Area” in Namibia. At the time, I was a journalist living in London and for years I gently but persistently prodded De Beers in London and South Africa to let me visit. I had first learned about the Forbidden Area as a school kid, when I saw it in an atlas. I made it then my goal to visit it some day. Not easy to do, but I did finally succeed. After seven years or so of asking, De Beers finally agreed.

I stayed there for two days in 1989 as a guest of De Beers. The first diamonds were discovered on the beach here in 1908 and almost immediately after, a 10,000 square-mile tract of southern African coastline and desert was closed off as a diamond concession. De Beers gained exclusive control soon after and has been gathering diamonds along the Forbidden Area’s 200 mile-long pristine beach ever since.

Over the years, political control over the Forbidden Area, also known by its German name the Sperrgebiet, has changed hands three times, from Germany, to South Africa and since 1990, it’s been a part of the independent African state of Namibia. The Forbidden Area makes up about 3% of that country’s total land mass, and is off limits to almost the entire citizenry. The Namibian government is now a 50-50 partner with De Beers, sharing the revenues from this most lucrative of all commodity operations.

Today, the Forbidden Area is probably the most unspoiled large plot of land left on the planet. The diamonds that come ashore here are particularly prized because on average, they are larger and higher- quality than those dug out of the ground. Sea currents over tens of millions of years gradually polish these raw stones to a state of unusual
clarity and brilliance.

As far as geologists can determine, beginning sometime during the Jurassic Age, the diamonds that wash up in Namibia were pushed to the surface by Kimberlite Pipes about 800 kilometers to the east, along what’s now the Orange River. The biggest, heaviest diamonds were gradually pulled down the river by currents and then eventually far out into the sea in Namibian coastal waters. The tides are now slowly but surely pushing them back on land.

About 10 years ago, De Beers began experimenting with ways to accelerate their recovery of these sea diamonds. They now have a fleet of five sea-going vessels that vacuum small quadrants of the seabed about 20 kilometers from the coast.

When I visited, De Beers relied almost exclusively on men from the Ovambo tribe to do the diamond harvesting along the beach. The De Beers facility inside the Forbidden Area was identical in appearance, if not in purpose, to a high-security prison. The Ovambo workers stayed in barracks near the beach for six months at a time. When their
stay was up, they were subjected to a full manual body search as well as an x-ray search. I too had to undergo both.

The security is tight for a good reason. Today, almost 10% of Namibia’s economy, estimated at $2.5 billion, comes from the Namibian government’s share of the money collected from selling sea diamonds to cutters and polishers in Tel Aviv, London and Antwerp.

The raw Namibian diamonds sell for around $1,000 a carat, at least triple the price of the high-quality stones mined in Botswana, and well over 10 times the price of most other rough diamonds.

When big money is at stake, however, human ingenuity will often find ways to outsmart the most elaborate security systems. As I was told during my stay, one Ovambo worker did come up with a successful way to smuggle diamonds out of the Forbidden Area. Each time his six-month stint was up, he would return to his village and collect a
homing pigeon. He would then smuggle the pigeon back into the Forbidden Area each time he returned. The X-ray search was only on the way out.

Once back in his barrack, he took the biggest diamonds he had hidden away during his last six-month shift, put it in a small pouch around the pigeon’s neck, and let the bird loose. It flew over the tall barbed wire fences and found its way back home. When his six-month shift was done, he returned home to find the pigeon and the diamonds waiting for
him.

Even the De Beers Afrikaner guards spoke with admiration about the brilliance and audacity of it. How then was he discovered? One time he got a little too greedy and put so many diamonds in the pouch the pigeon could barely gain the speed and altitude to make it over the fence. One of the guards in a guard tower saw it and a team of them quickly hunted the struggling pigeon down. The guards removed most of the diamonds from the pouch, and followed the pigeon back on its slow flight to its roost. Once there, they asked who owned the pigeon roost. They then knew immediately which of the workers had devised this almost-foolproof smuggling method. They drove back to the Forbidden Area. The worker confessed and returned to De Beers the diamonds he had kept hidden in his home.

While diamond prices continue to go up, lately because of surging demand in China, the total supply of new rough diamonds is in steep long-term decline. Many of the original diamond mines in South Africa are tapped out. But, as far as geologists can estimate, there are still about 80 million carats washing around in the waters off the Forbidden Area’s coastline. Assuming no big changes in tides or technology, the last of these stragglers — likely to be among the biggest and most valuable of all — will be gathered up by De Beers before the end of this century.

Peter Fuhrman is chairman & chief executive officer of China First Capital, an investment bank and advisory firm based in Shenzhen, China. Neither he nor his firm are investors in De Beers.