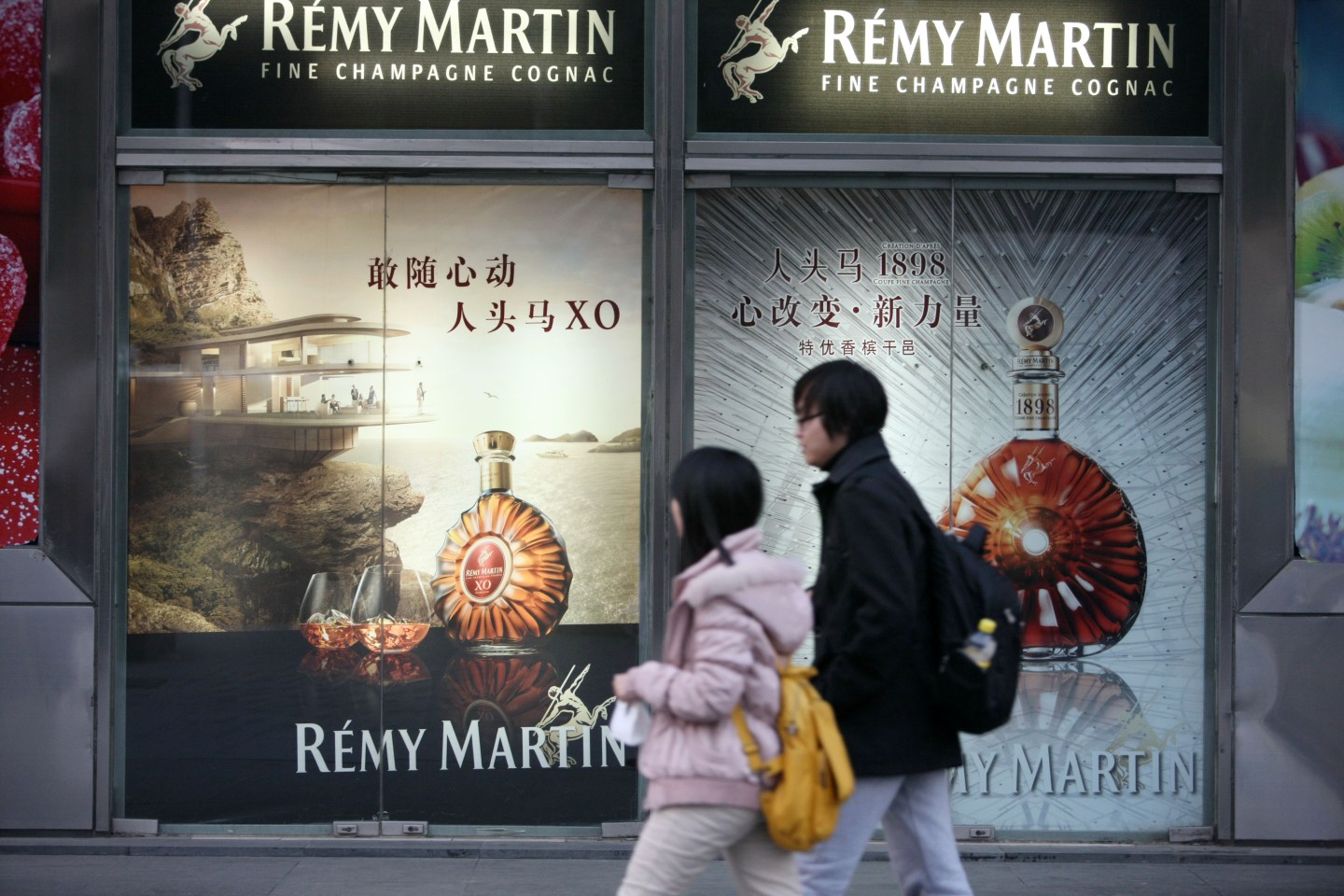 --FILE--Pedestrians walk past advertisements for Remy Martin cognac of Remy Cointreau at a shopping mall in Shanghai, China, 4 March 2013. Chinas clampdown on prostitution in nightclubs and bars will hit cognac producers, analysts have warned, as Beijing continues its clean-up of the worlds second-largest economy. Bars and karaoke venues are often fronts for illicit activities like prostitution or other forms of illicit sexual activity in China. The crackdown on the so-called yellow sector, which follows on from measures to stop extravagant gift-giving and corruption amongst top Chinese officials, saw over 2,400 venues shut down in the six days following the start of the operation on February 10. LVMHs Hennessey, Pernod Ricards Martell and Remy Cointreaus Remy Martin, have 94 percent of the market share in terms of volume in China, according to data from Euromonitor. Remy Cointreau has the highest exposure to China with an estimated 50 percent of profits in the country coming from its ultra-premium Cognac Louis XIII alone, Stirling said in a note.
Weng lei — Imaginechina/AP

Remy Martin’s first ever store dedicated to its $3,000 per bottle Louis XIII cognac is doing “very well” one month after its opening, the Remy Cointreau division’s chief executive Eric Vallat said on Monday.

Vallat also told Reuters in an interview he may launch similar stores in the United States or in Europe for the deluxe tipple.

The store opened on Sept. 20 in the well-known luxury mall of Shin Kong Place on the same floor as luxury fashion brands Fendi, Louis Vuitton or Berlutti.

It positions Louis XIII, a blend of 1,200 of its “eaux de vie” brandies sold in a crystal decanter, as “a true luxury brand,” targeting the same clients.

The number of Louis XIII clients worldwide is a closely guarded secret, but Remy says China is its top market.

Vallat, a former LVMH executive, joined the company from the luxury fashion industry in 2014, just as cognac sales in China reached a low point triggered by the Chinese government’s 2012 crackdown on corruption and conspicuous consumption.

The spotlight on excessive spending by government officials and state-owned company employees severely hurt the sales of Remy, which also sells Remy Martin and Club cognacs in China, and its larger rivals such as LVMH’s Hennessy and Martell, a Pernod Ricard brand.

Cognac makes up 60 percent of Remy Cointreau group sales and over 70 percent of its operating profit.

The Chinese crisis led to significant changes across the group, which expanded its footprint away from China and towards the United States, now its top market for cognac overall, making 38 percent of group sales against around 20 percent for China.

The arrival of a new management team with experience in luxury led by Remy Cointreau CEO Valerie Chapoulaud-Floquet also accelerated a strategy focused on a more high-end portfolio to drive profit margins.

The strategy differs from that of rivals, such as Pernod Ricard, which has taken the opposite approach, launching less-expensive brands in the Chinese market to cope with the downturn.

“We hit bottom but a faithful client base remained on which to build. The anti-graft crisis had one benefit in that it led clients to refocus on buying for themselves and family. This individual consumption is much more sustainable,” Vallat said.

He would not make a sales prediction for Louis XIII nor say when cognac sales would return to its pre-crisis levels in China.

“We think this upturn is very sustainable but reasonable. It is not going super fast but it is very healthy,” he added.

The company has said demand for its cognac started to improve in China in the second half of fiscal year 2015/16 ended March 31, and it has forecast a rise in Chinese sales for 2016/17 as a whole following a slight decline in 2015/16. (Reporting by Dominique Vidalon; Editing by Andrew Callus and Susan Thomas)