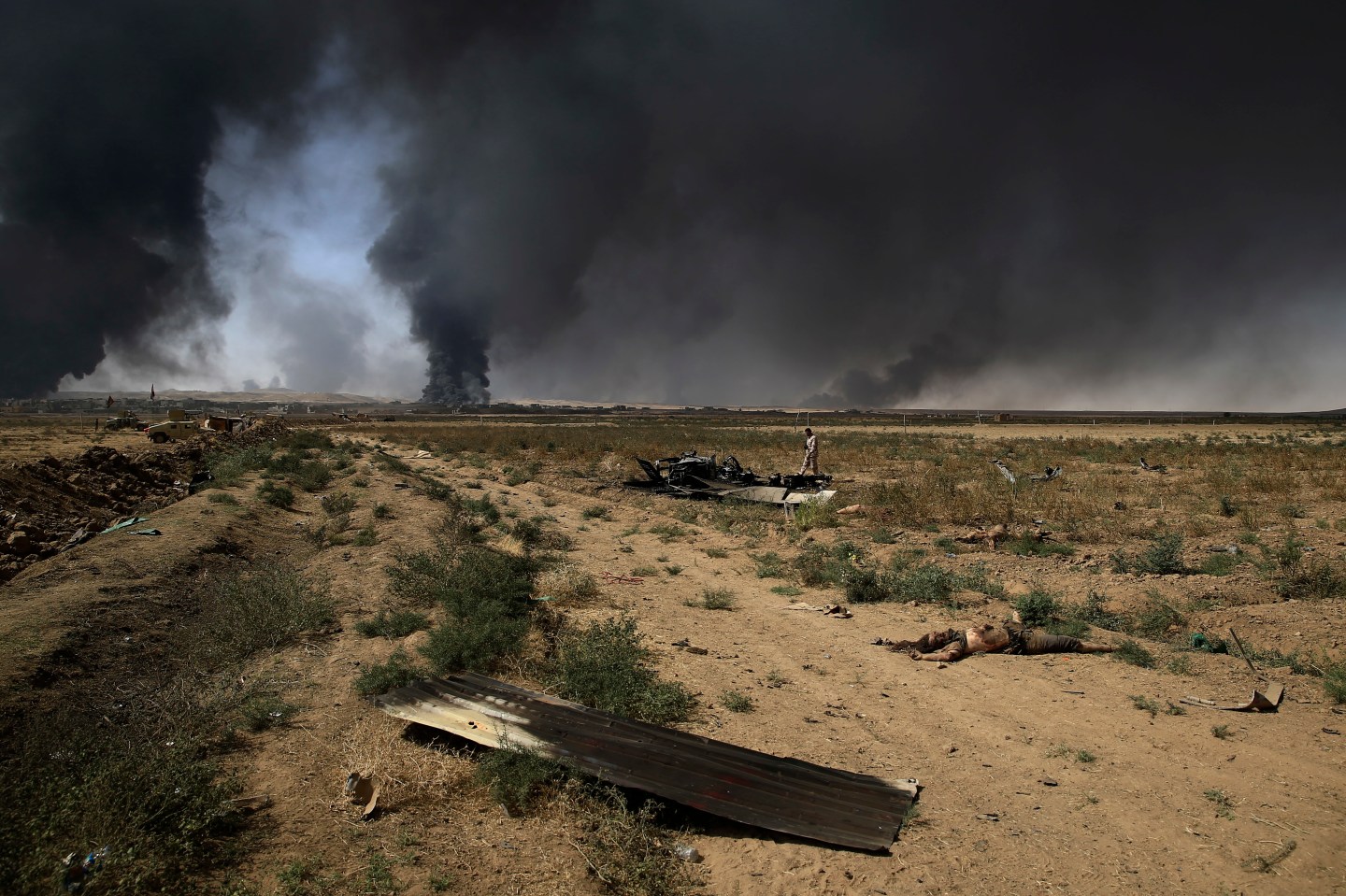 The body of an Islamic State militant lays on the ground after a repelled attack from the militants by the Iraqi army, outside the town of Qayyarah, Tuesday Oct. 4, 2016. Qayyarah has become an important staging ground for military and humanitarian efforts ahead of the Mosul operation. (AP Photo/Bram Janssen)
Bram Janssen — AP

U.S. Defense Secretary Ash Carter’s push for Iraq to let Turkey play a role in the battle to retake Mosul from the Islamic State group encountered stiff resistance Saturday from Iraq’s prime minister, who said his country’s forces will oust the militants from the northern city.

“I know that the Turks want to participate, we tell them thank you, this is something the Iraqis will handle and the Iraqis will liberate Mosul and the rest of the territories,” Haider al-Abadi said through a translator after meeting with the Pentagon chief.

Iraqi, Kurdish and other local forces will handle the battle for Mosul, al-Abadi said.

“We don’t have any problems,” he said, adding that if help is needed, “we will ask for it from Turkey or from other regional countries.”

Carter told reporters the issue of a Turkish role in the Mosul fight is a difficult subject, and that Abadi said in the meeting he has had talks with the Turks and expected to have more.

Iraqi sovereignty is a key principle, Carter said, and the American role is to work with partners in the coalition and try to resolve such matters, and ensure that everyone is focused on fighting IS.

“I am confident that we can plan a constructive role there,” he said, adding that Turkey is a member of the coalition.

What the Middle East Needs Now from America

One day earlier, Carter met with Turkish leaders in Ankara and told reporters of “an agreement in principle” for Turkey to play a role in the Mosul battle. Carter stressed at the time that any final decision would be up to the Iraqis, while expressing optimism the Turks and Iraqis could settle their differences.

Carter arrived in Iraq on Saturday to meet with his commanders and assess the progress in the opening days of the Mosul operation.

His visit came two days after a U.S. service member was killed outside Mosul, a sign of the risks facing American troops as they advise Iraqi forces in the fight.

Carter, who already has been to Iraq twice this year, has overseen the steady increase in the number of U.S. forces deployed to the fight and the growth of America’s effort to train and advise Iraqi troops. In his two earlier visits, Carter announced White House decisions to increase the U.S. troop level there. There were no expectations he would do that again.

For more on Iraq, watch:

During his stop in Baghdad, Carter met with Lt. Gen. Steve Townsend, the top U.S. commander in Iraq, and other leaders.

Carter’s meetings in Turkey were a sign of moves to ease tensions between Turkey and Iraq over Turkish military operations in northern Iraq. That divide has grown as the operation to retake Mosul began to take shape.

Some 500 Turkish troops at a base north of Mosul have been training Sunni and Kurdish fighters since last December. The Iraqi government says the troops are there without permission and has called on them to withdraw. Turkey has refused, and insists it will play a role in liberating the city.

The U.S. service member killed this week was the fourth U.S. combat death in Iraq since the U.S. began military operations against IS in August 2014. It was the first since the Mosul operation began, and the service member was working with Iraqi special forces northeast of Mosul and serving as an explosive ordnance disposal specialist.

U.S. military officials said a fire at a sulfur plant in northern Iraq set by IS on Thursday was creating a potential breathing hazard for American forces and other troops at a base south of Mosul that’s being used by troops as a staging area. The officials spoke on condition of anonymity because they were not authorized to discuss the matter publicly.

They said troops at the base were wearing protective masks, and that air samples were sent to the U.S. Defense Threat Reduction Agency for analysis. Officials estimated it could take two to three days to put the fire out.

U.S. defense and military officials have said that while the offensive has started well, they expect the complex fight for the city to get more difficult. They said they will be watching to see how aggressively the militants fight and whether more leaders flee the city.

In what officials thought was an attempted diversion from the Mosul fight, IS attacked targets in and around the northern Iraqi city of Kirkuk on Friday in a coordinated assault that killed at least 14 people.

A U.S. military officer said IS had set up a multilayered defense in and around Mosul. The outer rings of this defense are what the U.S. military calls disruption zones, where IS fighters are expected to counter the Iraqi advance through the use of mortars and rockets, suicide bombers, road obstacles and car bombs.

The official said the U.S. does not expect this to include high-intensity force-on-force combat in these outer rings. The expected IS focus will be on disrupting and delaying the Iraqi advance rather than trying to hold ground outside the city. The official was not authorized to discuss the matter publicly and spoke on condition of anonymity.

The U.S. estimates there are between 3,000 and 5,000 IS fighters in the Mosul area, but some leaders probably have fled. A key factor will be how long those midlevel commanders stay or whether they decide to leave.

More than 4,800 U.S. troops are in Iraq and there are more than 100 U.S. special operations forces operating with Iraqi units. Hundreds more U.S. forces are playing a support role in staging bases farther from the front lines.