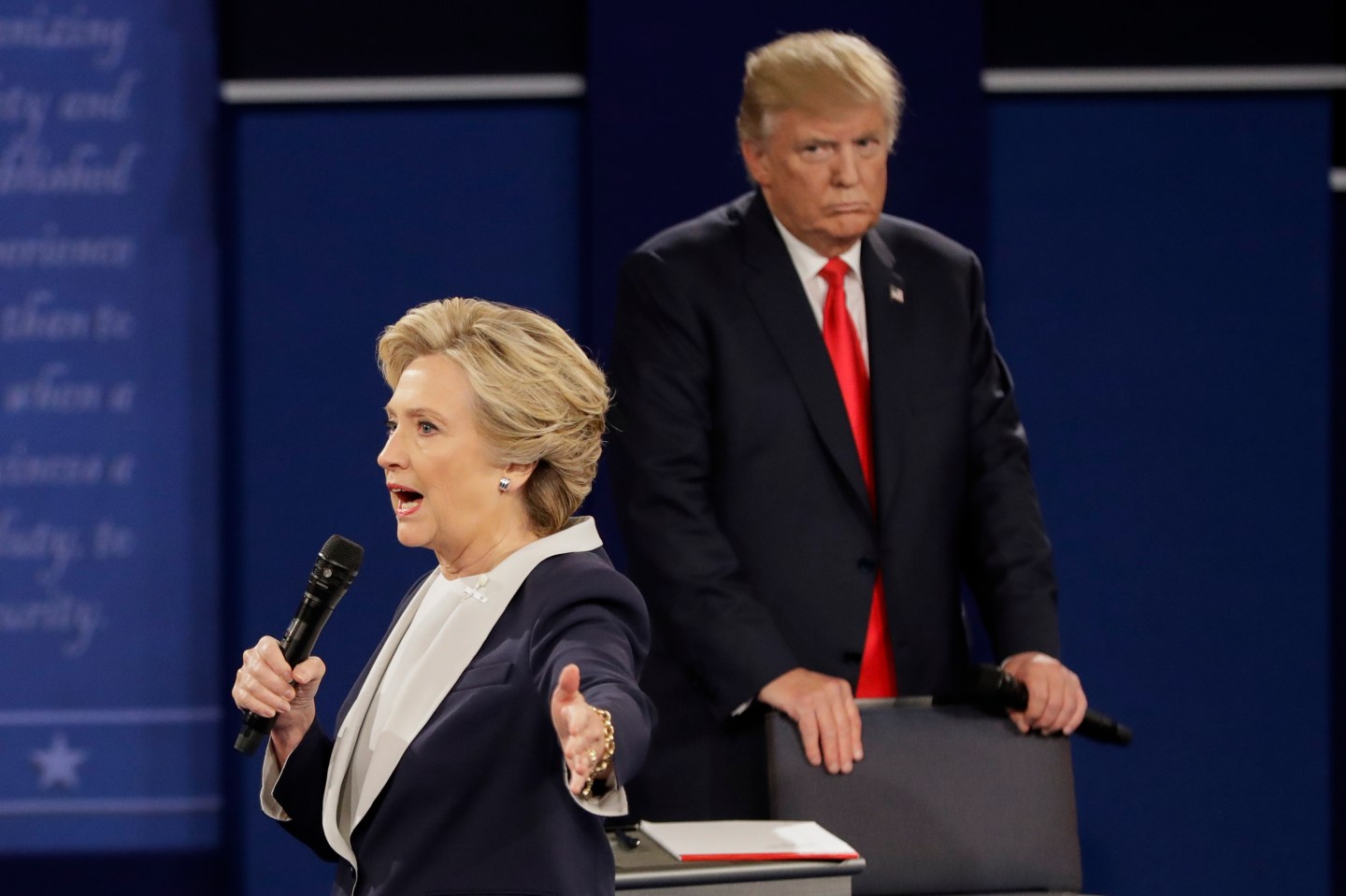 The U.S. economy will be one of the key topics slated to be the focus of tonight’s final presidential debate. Let’s hope Hillary Clinton and Donald Trump focus on policies that are good for economic development rather than wasting time on personal issues. We know their personal foibles but what about their policies?

We know that Trump wants to build a wall, but that does not help our ailing infrastructure. Saying you want infrastructure investment is not enough. How will it be funded? Incentivizing companies to bring some of the $2 trillion from overseas? Eliminating the tax break for carried interest?

What about the debt yoke we put on our children? This will soon squeeze out almost all non-entitlement government spending as the U.S.debt nears $20 trillion and a normalized 5% interest rate means $1 trillion dollars annually in interest payments. What is the plan to start cutting deficits?

How about smarter investments in education? While Clinton’s policy positions favor “debt-free college” and student loan forgiveness, Trump’s education proposal includes ensuring “universities are making a good faith effort to reduce the cost of college and student debt.” Neither proposal gets to the crux of the problem.

We promiscuously encourage crushing student loans yet students graduate without the necessary skills to fill open jobs. The most common complaint I hear from our 2,200 consumer technology companies is that the need for more qualified graduates with technical and STEM backgrounds. A simple solution is to shift federal funding from elite colleges with huge endowments to community colleges training Americans with skills in demand. And stop giving out low interest loans to students studying in fields like art history where few jobs are available.

The U.S. Bureau of Labor Statistics (BLS) projects U.S. companies will need more than 9 million STEM workers by 2022 – an increase of about 1 million jobs from 2012. Our next president must understand why and how STEM education helps us retain our competitive edge in this global economy.

Clinton is the only presidential candidate with a technology and innovation agenda. She has been clear that STEM is important and that a lack of human capital is holding back our country’s potential in this new “digital economy.” I want to hear Mr. Trump’s plan.

Another way to foster economic growth and retain our innovation edge is to focus on the need for high-skilled immigration reform. In six of the last 10 years, the U.S. has maxed out its cap on H-1B visas within five business days. And the nation’s current immigration system is afflicted by artificially-low visa caps, steep barriers to entry for qualified workers and massive visa backlogs – preventing the world’s best and brightest from coming to and staying in America.

High-skilled immigration should be encouraged and welcomed, not discouraged. This matches with voter sentiment, according to a poll of registered voters that the Consumer Technology Association commissioned that found skilled immigrants are valued and a plurality believes they should have top priority in the U.S. immigration system.

That’s no surprise given that foreign-born entrepreneurs contribute tremendously to the U.S. economy. According to a recent report from New American Economy, the U.S. is home to nearly 3 million foreign-born entrepreneurs whose businesses accounted for more than $65 billion in income in 2014. Moreover, immigrants create jobs for Americans and establish companies at higher rates than the national average.

By enacting Clinton’s plan of making investments in education and retraining programs, allowing the provision of “startup” H1-B visas and encouraging the world’s top talent to come to America, the U.S. will have the resources and knowledge to succeed in the 21st century economy.

Trump rails against “illegal” and Muslim immigrants and refugees but has been on both sides of the fence on high-skilled immigration. At the March 3 debate, he said he changed his mind and favored high-skilled immigration. Then he switched. What does he think now? Should the $6 billion the government spends each year on university science research mostly undertaken by foreign graduate students be wasted as we kick them out of the country? Do we want to be a magnet for the world’s best and brightest?

America needs a candidate who understands that U.S. companies compete globally and must trade to survive. A president must respect those who can weld, fix a car, run a factory and build things. Our next president must recognize that entrepreneurship and innovation are the engines that drive opportunity for all – a hallmark of our nation.

In this final debate, Clinton and Trump should stick to issues important to this country’s well-being and answer questions about how they propose to grow the U.S. economy, create jobs and improve education.

Gary Shapiro is president and CEO of the Consumer Technology Association (CTA), the U.S. trade association representing more than 2,200 consumer technology companies, and author of, Ninja Innovation: The Ten Killer Strategies of the World’s Most Successful Businesses and The Comeback: How Innovation Will Restore the American Dream.