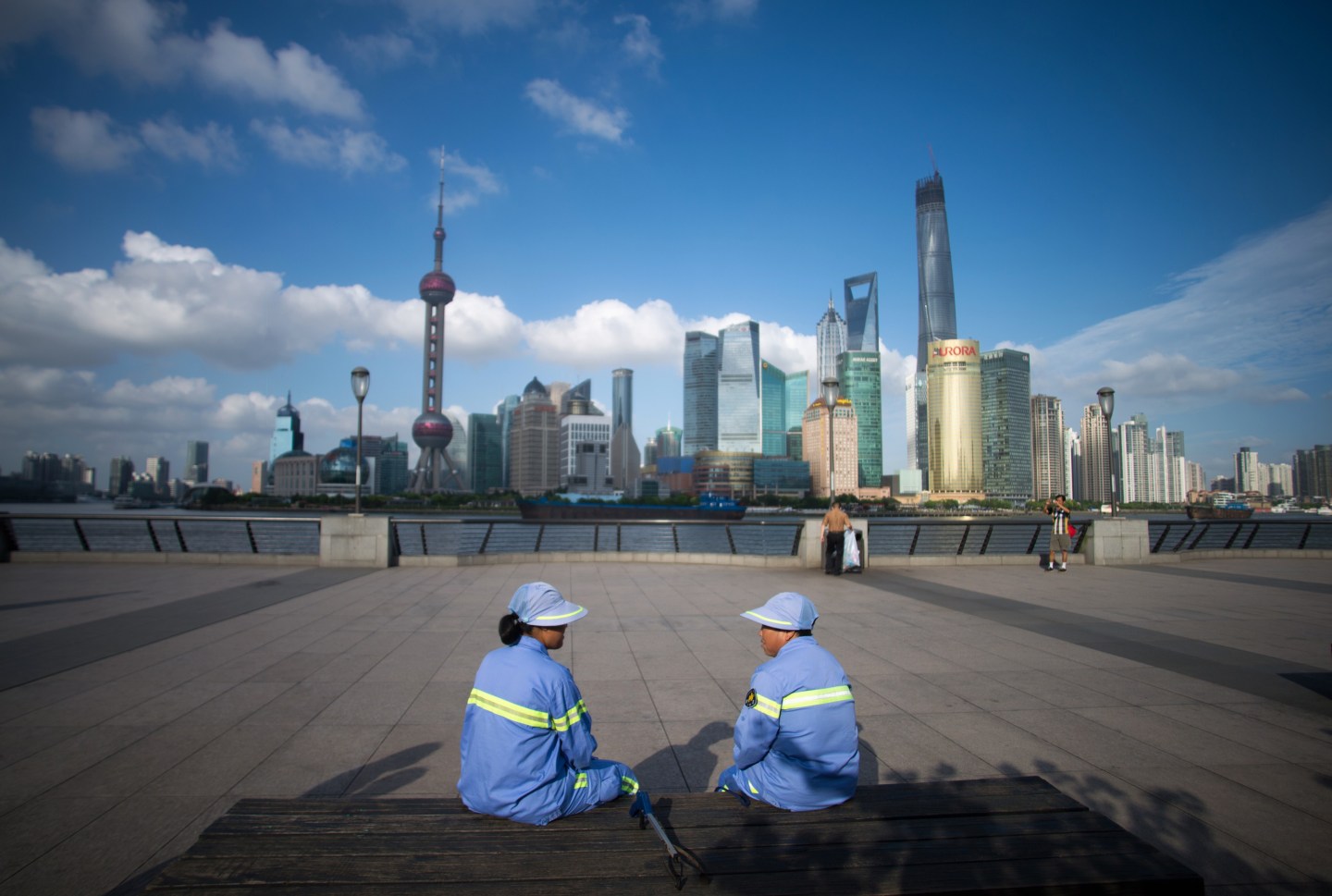 Two cleaners have a rest on a bench at the Bund before the Huangpu River and the skyline of the Lujiazui Financial District in Shanghai on July 23, 2014. Chinese growth accelerated to a forecast-beating 7.5 percent in the second quarter, official data showed on July 16, as government stimulus provided a much-needed boost to the world's second-largest economy. AFP PHOTO / JOHANNES EISELE (Photo credit should read JOHANNES EISELE/AFP/Getty Images)
JOHANNES EISELE/ AFP/ Getty Images

China‘s economy expanded at a steady 6.7% in the third quarter and looks set to hit Beijing’s full-year target, fueled by stronger government spending, record bank lending, and a red-hot property market that are adding to its growing pile of debt.

Wednesday’s data painted a picture of an economy that is slowly stabilizing but increasingly dependent on government spending and a housing boom for growth, as private investment and exports remain stubbornly weak.

Some economists believe Beijing has had to “double down” on stimulus this year to meet its official growth range of 6.5 to 7%, and say the government’s obsession with meeting hard targets may hurt both planned reforms and the long-term health of the world’s second-largest economy.

“So far this year they have clearly chosen to do everything they can to meet the growth targets, and now there is a little bit of an upward surprise from the housing market which actually will help them with GDP growth this year,” said Louis Kuijs, head Of Asia economics at Oxford Economics in Hong Kong.

“The question really is, is the leadership willing to move to somewhat lower growth targets in order to put growth on a more sustainable footing, or will it feel obliged to continue to hang on to those very high growth targets.”

The economy grew at the same clip in the third quarter year-on-year as in the first and second quarters, as analysts polled by Reuters had expected. Government infrastructure projects and the property boom have spurred prices and demand for raw materials and goods from cement and steel to furniture.

On a quarterly basis, it grew 1.8%, again in line with expectations but easing slightly from the previous period.

Economists believe the greatest near-term risk for China is a possible correction in the high-flying property market, which accounts for about 15% of GDP.

Property investment growth ticked up to 7.8% in September on-year, and property sales surged 34%, though new construction starts fell 19.4%, suggesting sentiment among builders may be shifting as the government looks to cool the buying frenzy.

A wave of restrictions imposed on buyers in major cities since early October has resulted in a sharp drop in sales and authorities are stepping up pressure on speculators.

Shanghai said on Tuesday it had punished some property agencies for falsifying contracts and had launched probes into some developers suspected of raising prices without authorization.

Most economists do not expect house prices to collapse, arguing the market is supported by steady migration to bigger cities, but memories are still fresh of authorities’ heavy-handed attempt to cool surging stock markets last year, which triggered a crash and an unprecedented government rescue.

The property craze has also heightened concerns about China‘s growing debt and the risks to its financial system, as much of the record loan growth has been driven by mortgages.

China‘s debt has soared to 250% of GDP and the Bank for International Settlements (BIS) warned in September that a banking crisis was looming in the next three years.

“We think that the cooling measures in property market will weigh on China‘s economy over the coming quarters,” Commerzbank economist Zhou Hao in Hong Kong said in a note.

But statistics bureau spokesman Sheng Laiyun said “the impact (of property adjustment measures) on the economy will not be very big” in the short-term.

Consumption contributed 71% of GDP growth in the first three quarters of the year, compared with 66.4% for 2015. The increase is partly due to contracting net exports but also indicates some success in Beijing’s attempts to rebalance the economy from an over reliance on investment-led growth.

September indicators were mostly in line with expectations and improved slightly from August, but industrial output growth unexpectedly cooled to 6.1% from a year earlier, versus expectations for 6.4%.

Fixed-asset investment rose 8.2% in January-September from a year earlier, as expected, as the government cranked up infrastructure spending to support the economy. Fiscal spending in the nine-month period climbed 12.5%.

Private investment growth picked up to 4.5% in September after falling to record lows in recent months, but still significantly lags investment by state-owned firms. For the first nine months, private investment rose just 2.5%.

While analysts expect China to meet its growth target this year, as usual, many remain skeptical of the official numbers, especially as growth has remain unchanged for three straight quarters even as the country attempts a major economic transition.

“The official GDP figures remain too stable to tell us much about the performance of China‘s economy. Our own measure of economic activity suggests that growth actually picked up last quarter, though the improvement clearly won’t last,” Julian Evans-Pritchard, China economist at Capital Economics in Singapore wrote in a note.

Capital Economics’ calculations suggest the economy is growing at around 5%.