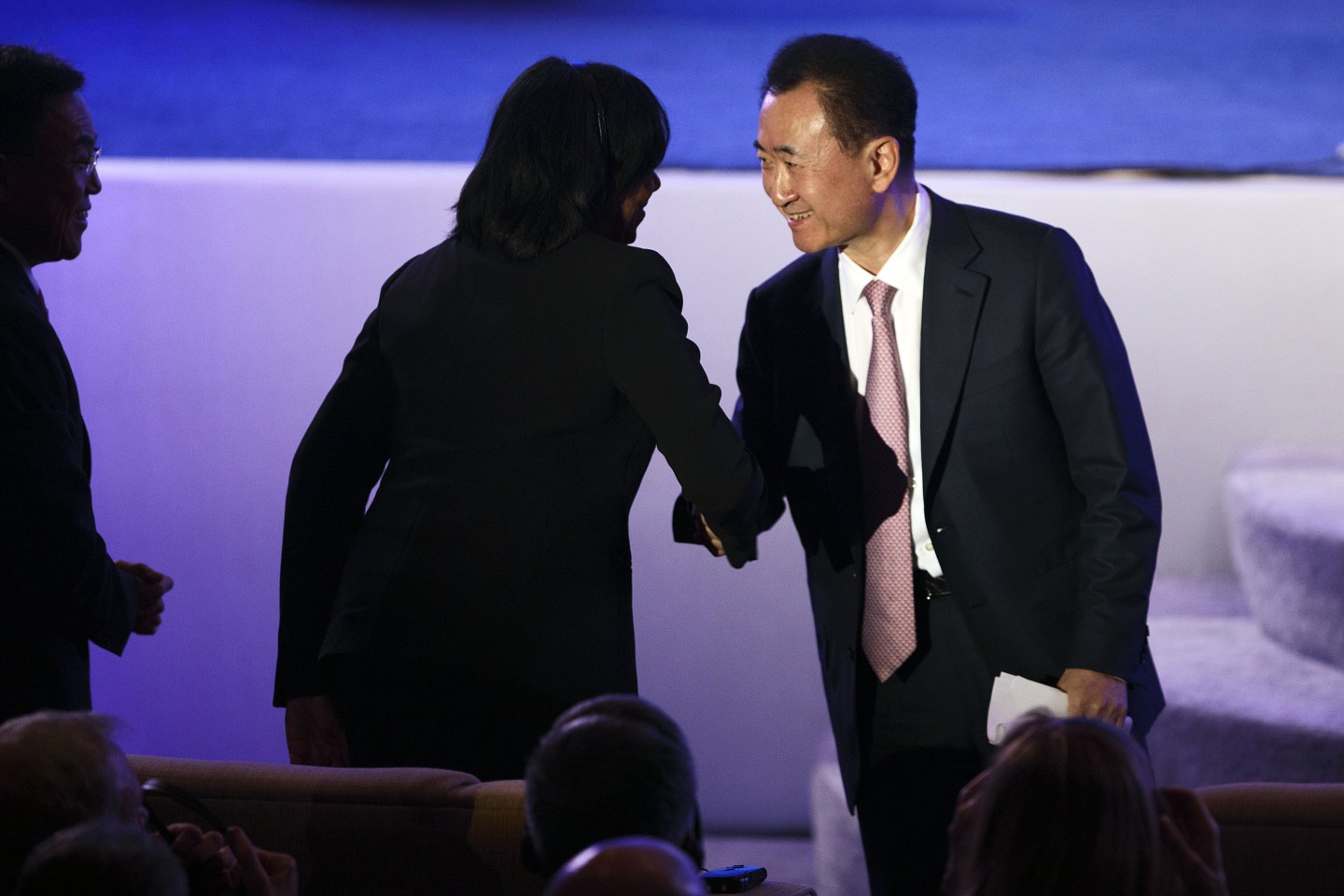 China’s richest man, on a buying spree in Hollywood, urged U.S. filmmakers to work more closely with the Asian country as he unveiled a subsidy meant to lure productions to his multi-billion dollar studio in the eastern Chinese city of Qingdao.

Wang Jianlin, the billionaire chairman of Dalian Wanda Group, announced on Monday a 40% rebate of certain costs of filming at the studio. The incentive will be paid from a five-year, $750-million fund financed by Wanda and the local government, the company announced at a red-carpet event that Wang hosted in Los Angeles.

“This is an opportunity for Hollywood, not a competition for Hollywood,” Wang said from a podium on stage at the Los Angeles County Museum of Art, speaking through a translator.

Wang has been the biggest Chinese dealmaker in the U.S. film business, buying Legendary Entertainment – one of the producers of “Jurassic World” and “The Dark Knight” – and U.S. cinema chain AMC Entertainment Holdings.

He is now trying to lure Hollywood filmmakers to the new production studio and entertainment district in Qingdao. In a video narrated by American movie star Matt Damon, the complex is described as offering clear air, a temperate climate and a coastal location “that strongly recalls Southern California.”

Legendary will shoot sequels to “Pacific Rim” and “Godzilla” at the Qingdao facility, Wanda said. Lions Gate Entertainment Corp and others have also agreed to shoot there, the company added.

Wang emphasized the rapid increase of moviegoing in China. He predicted the Chinese box office would match the biggest market – the United States and Canada – by 2018, and grow by about 15% annually for the next 10 years.

To succeed in that market, filmmakers need to feature “Chinese elements” in their movies, Wang said.

“You cannot try to just make money in the Chinese market and disregard Chinese tastes,” he said.

Some U.S. lawmakers have raised concern about the growing investment by Chinese companies in Hollywood and the impact it might have on media in the United States. Wang said he was speaking from a “business perspective” in encouraging films that appeal to Chinese audiences, not a political one.

Wang also criticized the current emphasis by U.S. studios on sequels and remakes of films that previously played well in China. “This will probably not work forever,” he said. “Now the Chinese audiences are smarter.”

For more on the film industry, watch Fortune’s video:

The Qingdao studio will compete with several U.S. states and countries that offer tax incentives to attract productions. The 40% rebate will apply to certain costs including stage and equipment rental, set construction and accommodations.

“It’s good because China doesn’t have any incentives,” said Rob Cain, a consultant and partner at Pacific Bridge Pictures. Wanda needs to entice filmmakers to try out the facility and “come back and say good things about the experience,” he said.