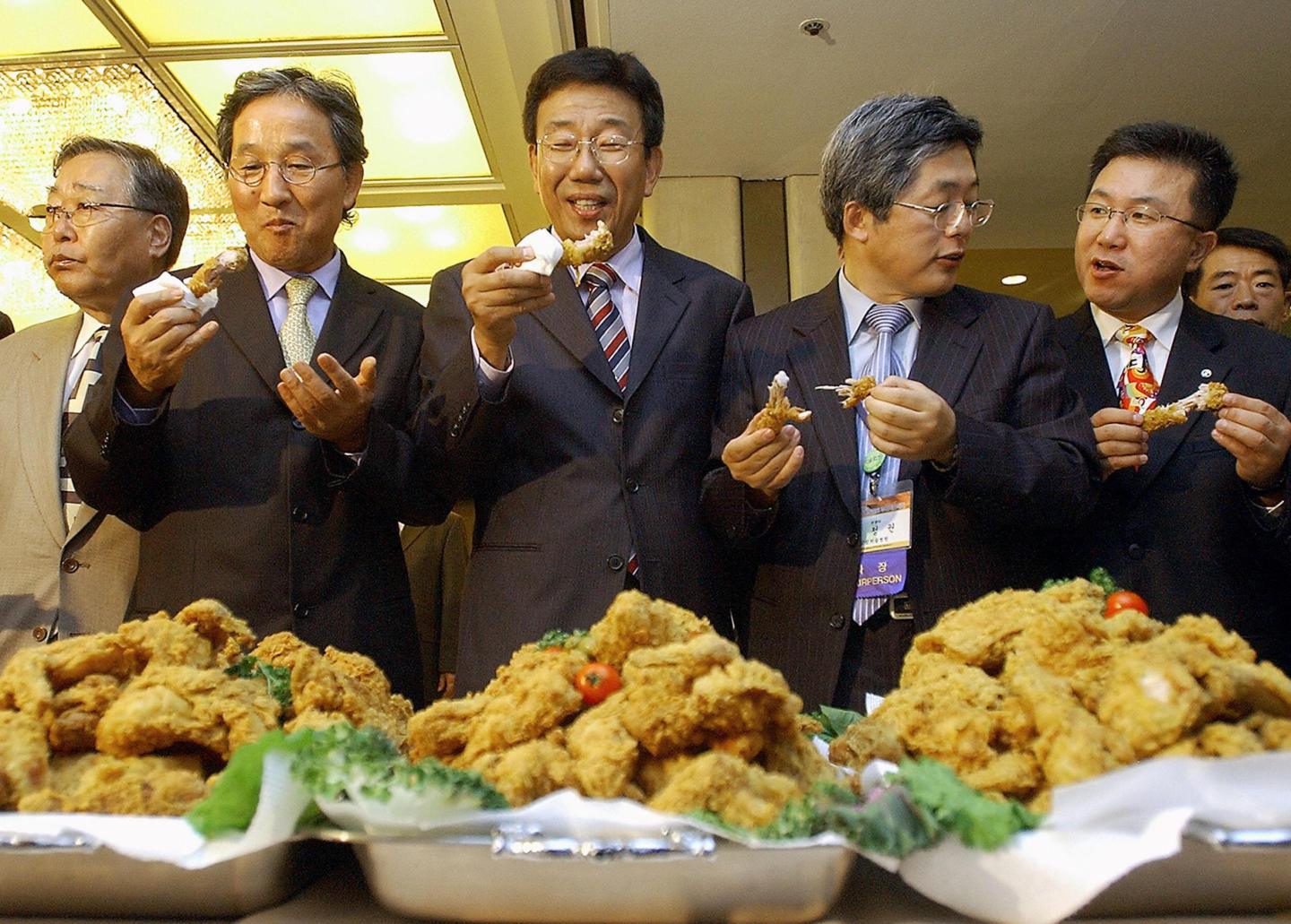 Don’t count your chickens before they hatch.

Global poultry producers hoping to cash in on South Korea’s craze for fried chicken and beer face a market crowded with local birds that have clipped prices and profits for Korean growers.

The popularity of the combination, known as “chimaek“, has boomed in recent years, fueled by its appearance in a hit South Korean television drama and an explosion of restaurant chains.

At a Seoul outlet of the popular BBQ chain recently, Kim Chang hoo said he and his colleagues had planned to go to a sushi restaurant for a company dinner, but decided instead on chimaek – a mashup of chicken and maekju, the Korean word for beer.

“I cannot help think of chicken, even when I’m eating sushi,” Kim, 24, said. “I don’t know if it’s just me, but chicken always comes to my mind and is always delicious.”

The craze has pitted domestic chicken producers in an increasingly tough battle for market share, prompting an oversupply and a drop in farm prices.

Now imports are set to rise as South Korea lifts bans on overseas suppliers who are attracted by still low per capita consumption rates.

South Korea’s market for chicken is expected to grow 5% to 1.01 million tons this year and a further 3% in 2017, according to the U.S. Department of Agriculture (USDA), boosted by the chimaek craze.

All have seen their earnings hit in the first half of this year as they ramp up production to secure market share.

Park Ju-No, the managing director at Harim, acknowledged producers were engaged in a “game of chicken,” each holding a potentially dangerous course in the hope their rivals flinch first.

“We think it’s more crucial to focus on quality differentiation to survive instead of adjusting production, even though it contributes to a glut,” said Park.

Park expects the imbalance to ease in the second half as the number of slaughtered chickens drops in summer, but sees the market over-supplied again next year as imports from the United States and Thailand resume.

In July, Asia’s fourth-largest economy lifted ban on chicken imports from the United States, imposed due to a bird flu outbreak in 2015.

It is likely to resume imports in November from Thailand, banned since a 2004 bird flu outbreak, according to Korea’s Animal and Plant Quarantine Agency.

Overall South Korean chicken imports are expected to rise 9% to 130,000 tons this year, and a further 8% in 2017, due to the resumption of U.S. chicken imports, the USDA report showed.

“It’s going to be a tougher market because the U.S. only had to compete against Brazil before, but now there are more competitors like Denmark and sooner or later Thailand,” said Jenis Bae, manager at KTSC, who has imported U.S. chickens for almost 20 years.

Still, the competition is good for consumers and restaurants drawn to the chimaek boom.

Even global giant KFC (YUM) recently opened its first “KFC Chimaek” outlets in South Korea, offering set menus such as two pieces of fried chicken, cheese fries and a glass of draft beer for 7,500 won (around $7).

Major Korean franchises are now expanding their overseas stores, particularly in China where the TV show “My Love from the Stars” is wildly popular and its heroine’s chimaek cravings strike a chord with viewers.

“We learned the food culture of South Korea from Korean soaps,” Gu Chenghu said at a chimaek outlet in Shanghai. “Also many young people are willing to try something fresh. So it’s very popular.”

“Our aim is to having more stores globally than McDonald’s (MCD),” he said.