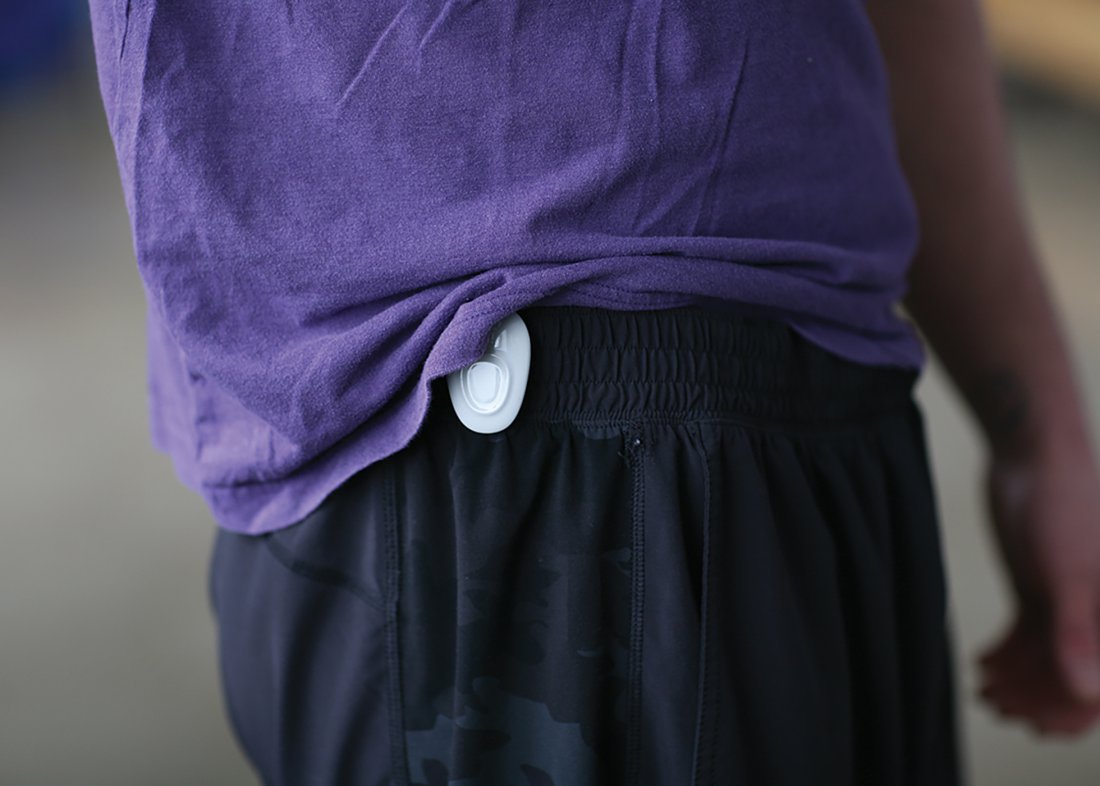 My wife needed help. At least, that’s what the text message said. The ‘critical alert’ arrived from an unfamiliar number. It had a link to a webpage that brought me to an audio recording from her phone. And when I pressed play, I could hear that that she was in a car, listening to music.

Thankfully, she didn’t really need my help at all. She was fine, only a few miles away, helping me test the Wearsafe Tag, a small, Web-connected panic button that makes your smartphone send an SOS in case of an emergency. Think of Wearsafe as a First Alert Button for the 21st Century. Only except yelling “I’ve fallen and I can’t get up,” my wife could be saying, “I’m being chased,” “I’ve injured myself on a hike,” or nothing at all. When the gadget’s button is pressed, an accompanying smartphone app transmits her location via GPS and 60 seconds of audio from the moments beforehand.

Wearsafe’s Tag is one of many new Safety-As-a-Service gadgets taking advantage of trends like ultra-fast wireless connectivity and cloud computing to give users peace of mind. Other examples include the $99 Revolar, a keychain dongle or clip-on wearable, as well as devices still under development, like Amulyte and Stiletto, both of which are attempting to make safety wearables that look like stylish accessories.

Calling 911 is still the best way to get help quickly in an emergency. But earlier this year HBO’s John Oliver turned his spotlight on our 911 system, characterizing it as badly antiquated. One notable takeaway: Many 911 systems can’t pinpoint the exact location of cell phone callers, despite that most of those devices have built-in GPS technology. Yet Last Week Tonight missed some promising solutions being put forth by various technology companies, including Wearsafe.

Wearsafe and similar devices are trying to solve one problem in particular: Nobody wants to be fumbling around with their smartphone during an emergency. “We’ve shaped our lives around accommodating these devices because they provide so much value,” says Wearsafe co-founder David Benoit. “But the use of [smartphones] during what we call a distress event is very problematic” he says.

Yet as firms like Wearsafe find opportunity in making people safer, they’ve encountered another dilemma: Doing so without seeming opportunistic. The Wearsafe Tag is free to try. But eventually you’ll need to pay a $5 monthly subscription fee. That’s a seemingly modest amount, but it’s still more than the $0 it costs to call 911.

That said, if you’re unfortunate enough to ever need Wearsafe’s panic button, it can be invaluable. The Bluetooth-equipped device links to your smartphone and triggers an emergency alert to be sent through its app, which also needs to be installed on the smartphones of people you want to alert. The service sends SOSes as both a text message and a push alert, hoping to reach as many people in your safety network as quickly as possible. These friends and family will immediately get access to the audio recording and your GPS location through the Wearsafe app on their phone. The app also has a handy button so alert recipients can make a 911 phone call on their loved one’s behalf.

To be sure, Wearsafe only works as an intermediary to getting help — your friends still need to see the alerts and act upon them. Calling 911 is a more direct line to assistance. But as Oliver’s segment pointed out — with an NBC News reporter calling the emergency number from a 911 call center, and the system thinking he was a quarter mile away — it’s not always very accurate.

Another startup, RapidSOS, may have a solution to that problem. The company, which has raised $10 million from investors and was recently named startup of the year by the Consumer Technology Association, aims to add new smarts to the emergency dispatch system. Using the company’s smartphone app, Haven, people can call or text 911 with just a few taps. The app also sends along other relevant data, like GPS location data, to 911 call centers.

So far, emergency response systems have handled RapidSOS’ data well. But the company’s efforts represent a major overhaul of how we call for help. In our landline-driven past, dispatchers would get information about the location of a phone call by cross-referencing the phone number with billing records. But in a world full of always-moving mobile phones, that system doesn’t work. Getting 911 systems up to date, it turns out, is a tough task.

“We have to figure out how to push data through a very dated infrastructure that runs in 6,000 different ways across the U.S., run by 10,000 municipalities, in a way that can never fail,” says RapidSOS cofounder Michael Martin.

RapidSOS’ Haven app has handled more than 100,000 calls since launching this spring; the company is expecting tens of millions of calls to start pouring through soon. For now, the app is free to download and use. And when you consider that it’s effectively a 911 call, you might think it should stay that way — the emergency dispatch service is a taxpayer funded public utility. But RapidSOS’s website lists a $29 annual fee for individuals, and $49 for families. It is, after all, a money-making venture.

For his part, Martin says he struggles with the conflict between wanting to provide a potentially life-saving service with the need to monetize that service to keep it growing. “I am unsatisfied with a world where we have to charge people for this,” he says. “We never thought of ourselves as a direct to consumer business,” he says. The company has partnerships with more than two dozen insurers, nonprofits, and tech companies to embed its technology into apps and services, and is working with domestic violence groups to give the app to victims free of charge.

That still may not be enough. Smartphone makers could go a step further, integrating emergency services like RapidSOS directly into their products. There’s already precedent for this in the way smartphones relay AMBER Alerts, sent in the case of a missing child. Privacy issues would no doubt arise, meaning this wouldn’t be an easy undertaking. But that’s often true of life-saving ventures.