GOP Strategists: Clinton is in Good Shape With 3 Weeks Left 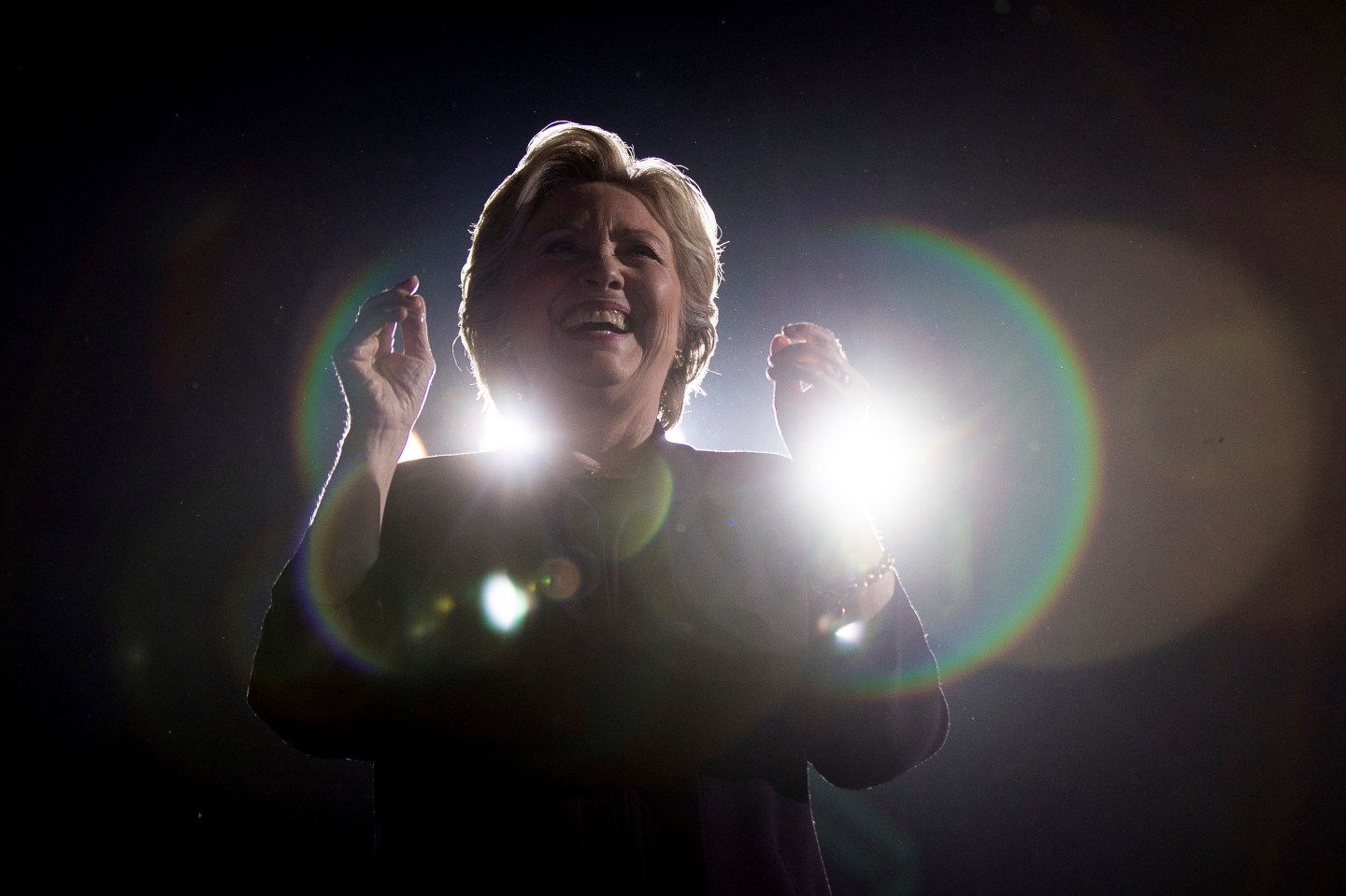 With roughly three weeks to Election Day, Republican strategists nationwide publicly concede Hillary Clinton has a firm grip on the 270 Electoral College votes needed to win the White House—and may be on her way to an even more decisive victory over Donald Trump.

“He is on track to totally and completely melting down,” said Republican pollster Whit Ayers, who is advising Florida Sen. Marco Rubio’s re-election campaign. Like many Republican strategists, he was willing to speak publicly about the GOP nominee’s rough road ahead at the end of an unprecedented campaign.

Things can change before Election Day. There is one more presidential debate, and Trump has rallied before. His core supporters remain strongly committed.

But along with indicators such as polling, campaign travel, staffing and advertising, the interviews with Republican political professionals unaffiliated with the Trump campaign suggest only an epic collapse by Clinton would keep her from winning enough states to become president.

In the past week, Trump’s campaign has been hit by allegations the New York billionaire sexually accosted several women over the past three decades. Early voting in pivotal North Carolina and Florida shows positive signs for Clinton, and donations to the Republican National Committee are down about a quarter over the past three months from the same period in 2012, when Mitt Romney was the nominee.

Preference polling in the past week, meanwhile, has generally moved in Clinton’s direction, with the Democrat improving in national surveys and in a number of contested states.

If the election were held today, Clinton would likely carry the entire West Coast and Northeast, as well as most of the Great Lakes region — a place Trump once identified as ripe territory for his populist message against free trade.

Only Ohio is a toss-up in that part of the country, but the perennial battleground may not play a decisive role come Election Day this year due to Clinton’s strength—and Trump’s weaknesses—elsewhere.

Trump and running mate Mike Pence have made a hard play for Pennsylvania, a state carried by the Democratic nominee in the past six elections. But their strategy to hold down Clinton in Philadelphia and its suburbs while running up Trump’s vote total in more conservative parts of the state has failed to materialize.

“He’s getting his brains beat in by women in the Philly suburbs,” said Ed Goeas, a Republican pollster who is surveying presidential battlegrounds and several states with races for U.S. Senate.

Trump was already struggling to attract support from women before his first debate with Clinton in late September. It was at that event in New York where Clinton stung Trump by reviving his past shaming of a former Miss Universe for gaining weight.

Trump’s response, calling the contestant’s weight gain “a real problem” in a TV interview the next day, was quickly eclipsed by the publication of a video from 2005 on which the Republican bragged about using his fame to prey on women.

An apology followed, but Trump also insisted his comments were nothing more than “locker room talk.” He denied at the candidates’ second debate that he ever acted in the ways he discussed in the 2005 video.

Within days, several women had come forward to accuse Trump of unwanted sexual advances and sexual assault. He responded by calling his accusers liars and, on Friday, suggested they were in some instances not physically attractive enough to merit his attention.

“His entire tack could not be better designed to drive away college-educated women,” said Ayers, the GOP pollster.

Educated women living in suburbs have long been a key part of the GOP coalition, but polls indicate the revelations about Trump’s behavior have pushed them toward Clinton in the battleground states of Colorado and Virginia.

The events have also foiled Trump’s late-in-the-campaign plan to re-ignite his hope of carrying Wisconsin. Trump and Pence were to campaign with House Speaker Paul Ryan in his home state a day after the 2005 video was made public. Ryan withdrew his invitation to Trump, and Pence later cancelled.

Trump can still count on carrying states across the West, the Great Plains and in the South, but Ayers and other Republicans predict he may ultimately end up with fewer than 200 Electoral College votes.

Should the Republican fall short in Pennsylvania, he would need to post victories in both Florida and Ohio, as well as several other battlegrounds — North Carolina, Virginia, Nevada and New Hampshire among them — to reach 270.

But that’s only if he prevails in reliably Republican Arizona, Georgia and Utah.

In Utah, Trump’s deep unpopularity among the large population of Mormon voters could lead to four candidates winning 10 percent or more of the state’s vote. That kind of uncertainty opens the door to a win there for Clinton or for third-party candidates Evan McMullin and Gary Johnson.

In Arizona, won by the Republican nominee in all but one election since 1952, Trump’s characterization of some Hispanic immigrants as criminals has turned off many in the state’s growing and Democratic-leaning Hispanic community.

GOP nominees have carried Georgia in seven of the last eight presidential elections. But about a quarter of the state’s voters are African American, a reliably Democratic-voting bloc. Like Virginia, Georgia is also home to well-educated young professionals more likely to favor Clinton, said Chris Jankowski, a Virginia-based national GOP consultant.

“With Trump bleeding out, he could find himself competing to win the white vote in Georgia,” Jankowski said. “That’s when you know it’s over.”