This Is the Ultimate Virtual Reality Buyer’s Guide 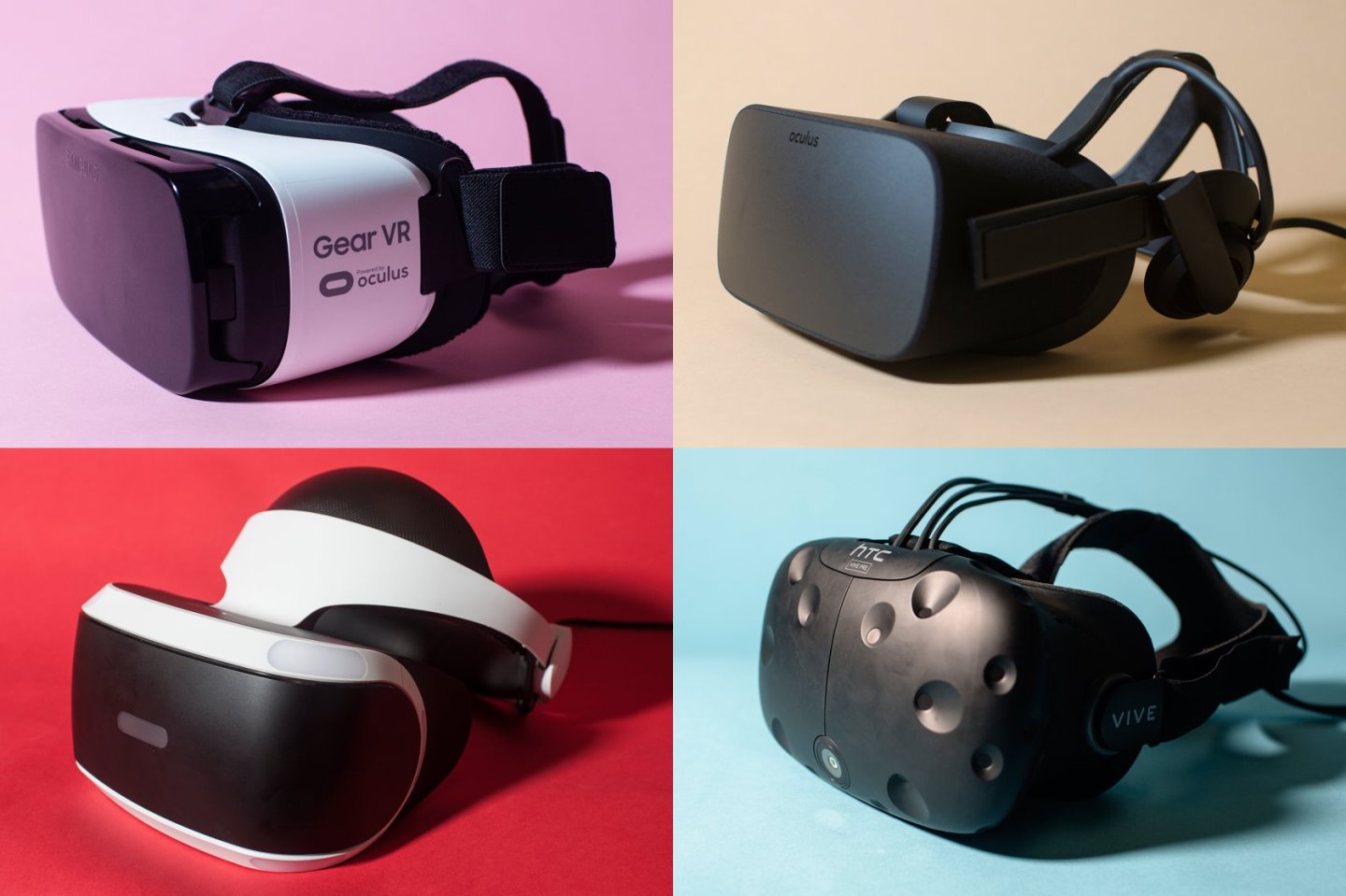 Clockwise from top left: The Samsung Gear VR, The Oculus Rift, the HTC Vive, and the PlayStation VR.
Tyler Essary/TIME

On some level or another, virtual reality technology has been around for decades. But this year is the first time you can go out and buy a headset that brings VR into your home.

There’s a wide range of virtual reality headsets on the market, from the high-end Oculus Rift to the entry-level Samsung Gear VR (not to mention the DIY cardboard variety). All of them offer a wide variety of experiences, ranging from games to interactive stories to 360-degree video.

So which VR headset is right for you? That decision will likely come down to how much you’re willing to spend, and what kind of hardware you already own. Most of these headsets cost hundreds of dollars, while some require expensive, high-end computers to help power them.

Here’s a closer look at how today’s VR offerings compare—and which headsets we recommend.

The Samsung Gear VR’s $99.99 price, the fact that it’s cordless, and its overall effortless setup make it a more practical, albeit more limited, option than premium virtual reality headsets like the HTC Vive and Oculus Rift. Unless you’re an early adopter, the Gear VR is probably the best option for you, especially if you already own a Samsung phone.

Why is the Gear VR so inexpensive? It has several limitations: It doesn’t track your body’s movement in the digital space the way the Vive, Rift, and PlayStation VR do, vastly restricting how you can interact with virtual objects. This means you can’t wave, duck, or aim at characters using the Gear VR the same way you can with these other headsets. Instead, you’ll need to use the touchpad mounted on the side of the headset or a controller accessory to navigate virtual worlds.

That said, the Gear VR offers a convincing enough experience to trick your brain into thinking your body is moving, a sensation that makes virtual reality unlike anything else you’ve tried before. The experience is vivid enough to give you a taste of virtual reality, but at a much more accessible price point than the other headsets listed here.

Samsung’s Gear VR (SSNLF) has plenty of room for improvement. Its biggest drawback is that it lacks a controller specifically designed for virtual reality. Google’s (GOOG) upcoming Daydream View headset, which costs only $79 and could eventually be compatible with a wider range of smartphones, launches in November — with a remote that enables gesture controls. If it works well, Google’s headset could replace the Gear VR as our top pick in this list. But it’s worth mentioning that Gear VR is powered by the Oculus platform, meaning it already has lots of great content and is likely to get more features down the road.

At about $400, the PlayStation VR is significantly cheaper than other premium VR offerings, like the $600 Oculus Rift and $800 HTC Vive. It’s an especially sensible option for VR-curious gamers who already own a PlayStation 4, since Sony’s current console and a $59.99 camera are all you need to power the device (Sony’s roughly $25 Move controllers are optional). Regardless, those who don’t own a PlayStation 4 can buy one for hundreds of dollars cheaper than the near-$1,000 PC currently needed to power the Vive and the Rift.

Hardcore gamers that own both a PlayStation 4 and a beastly PC may be wondering how the PlayStation VR compares to its more expensive rivals. While the PlayStation VR’s resolution may not be as sharp as that of the Vive and Rift, Sony’s (SNE) headset is more comfortable to wear, easier to set up than HTC’s, and offers motion control support at launch. (Rift owners won’t be able to play games using gestures until the company ships its $199 Touch controllers on Dec. 6.) Although the Rift’s resolution is technically higher, the PlayStation VR’s display has been specifically designed to show red, green, and blue colors at a higher quality than black. This makes graphics appear vivid and clear, since it’s more difficult to see the black spaces between the pixels on the PlayStation VR’s screen. The mechanism Sony put in place for adjusting the headset’s fit and focus is also much simpler than that of most VR headsets, and is especially friendly to glasses-wearers.

The PlayStation VR’s major drawback is that users are bound by unwieldy cables, which sometimes hinder the experience. That’s also an issue with the Oculus Rift and HTC Vive, both of which need to be tethered to a computer to work. This is in part why smartphone-powered ,and therefore cordless, headsets like the Samsung Gear VR are so attractive. The downside of those headsets, however, is that they don’t provide as high-end an experience.

My other gripe with the PlayStation VR is that it doesn’t do a great job at making it easy to see the Move controllers when you’re not playing a specific game. The Vive, by contrast, displays your controllers in the digital space, making it easier to navigate menus and change settings. The PlayStation VR doesn’t do this, meaning it’s tough to switch between the standard DualShock controller and the Move sticks while wearing the headset.

In my experience, using the Rift felt very similar to playing games on the PlayStation VR, although the Rift’s display resolution is a bit crisper. When the Facebook-owned Oculus starts selling its motion remotes in December, I presume this too will feel more or less the same as using the PlayStation VR’s Move wands. Like the PlayStation VR, the Rift requires a single camera which tracks the wearer’s motion. That enables players to wave and point these motion-sensitive remotes within the camera’s range to interact with games and apps. Such functionality is crucial for making VR feel more real than it does when using a regular game controller. Rift owners who wish to upgrade the experience can opt to purchase additional sensors for $79 each, which can enable a room-scale virtual reality experience similar to that of the HTC Vive.

The Rift, while it suffers from the same annoying dangling wire issue as its rivals, certainly won’t disappoint. But for gamers seeking a premium VR experience, we recommend the PlayStation VR instead, simply because it’s cheaper. The differences between the two headsets in terms of performance and game selection isn’t different enough to justify an extra $200, not to mention the expensive PC you’ll need to run the Rift.

Still, this could very well change in the future. Facebook (FB) wants to make VR the next great social platform, so the Oculus is likely to see new features that will make it useful for more than just gaming and watching movies. (These features could also come to cheaper headsets on the Oculus platform, like the aforementioned Samsung Gear VR.)

There is one reason to pick the Rift over the PlayStation VR: If you’ve already got a high-end gaming computer, and you don’t have a PlayStation 4, it makes more financial sense for you to pick up the Rift.

As it stands, the HTC Vive (HTC) is in a class of its own. Comparing it to the Oculus Rift, PlayStation VR, and Samsung Gear VR almost feels unfair. That’s because the Vive uses two special sensors that physically map your environment, making it possible to wonder around virtual worlds like you’re on Star Trek’s holodeck. It’s a limited effect, but you can walk over to an object and interact with it, for instance, rather than just waving or aiming at targets in front of you. It’s strikingly different from other VR headsets, making it the most impressive such gadget on the market by a long shot. The Rift will support similar experiences when it starts shipping extra sensors for its headset later this year.

That said, the Vive is also the most expensive VR system. The $800 price tag, especially when combined with the approximately $1,000 PC you’ll need to power it, is steep. The cumbersome setup process, meanwhile, is a pain. This type of virtual reality, which lets you freely explore the space around you, is still better suited for use in theme parks and other kind of arcade simulations. From that perspective, making room scale support an optional feature for the Oculus Rift seems like a smart move. Rather than paying around $800 for a package that includes two sensors, the headset, and Touch controllers, Rift buyers can go à la carte and choose whether they want just the controllers or the whole bundle. All told, we’re looking forward to the next generation of headsets, which might make the Vive’s power available at a cheaper price.