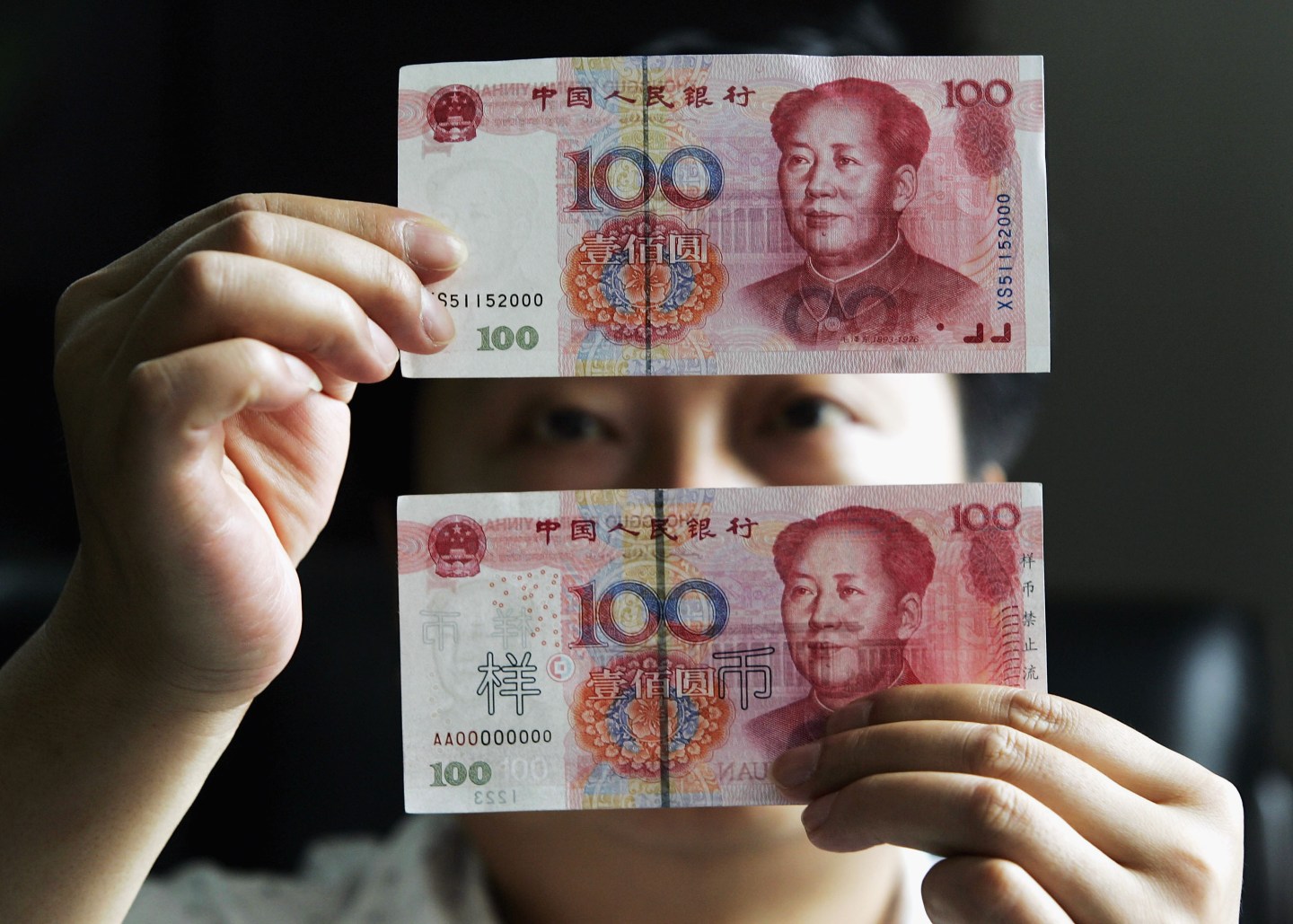 SHANGHAI, CHINA - AUGUST 31: (CHINA OUT) A Chinese man identifies a new issued 100 yuan note with an old one issued in 1999, at a bank on August 31, 2005 in Shanghai, China. Authorities issued new yuan notes today that largely resemble bills in circulation but with new marks meant to foil currency counterfeiters. New 100, 50, 20, 10 and 5 yuan notes, as well as a 1 jiao coin (10 Chinese cents), were available from the People's Bank of China. The design of the new bills, bearing a portrait of former Chinese leader Mao Zedong, remains the same as the last-issued 1999 series but incorporate new watermarks and other minor changes that will make it harder to duplicate, according to state media. (Photo by China Photos/Getty Images)
China Photos/Getty Images/File

China has become increasingly concerned about capital flight and the potential fallout on the country’s foreign exchange market as well as efforts by policy makers to shore up confidence in the world’s second-largest economy.

Illegal banking has been rampant in some parts of the province such as the capital Shenzhen, where an underground bank that handled 30 billion yuan in transactions was busted in August.

The story also cited a bust by Shenzhen police this month, where 10 suspects illegally moved 48 billion yuan ($7.20 billion) out of the mainland from 2014-2015 by establishing fake trading companies in Shenzhen and neighboring Hong Kong.

Guangdong police revealed this week that at least 207 billion yuan was channeled out of the province last year in illegal money transfers, striking at the heart of one of China’s biggest challenges.

Beijing started a campaign against illegal banking in April last year and uncovered over 170 cases of money laundering and illegal fund transfers involving more than 800 billion yuan as of last November.

The crackdown included an investigation into the country’s biggest underground banking case involving $64 billion worth of illegal transactions.

China’s latest bid to tackle illegal outflows comes as its yuan currency weakens to six-year lows. Hong Kong is the most popular route, analysts say, because of its proximity to China.

The Ministry of Public Security (MPS) said in August that a special task force launched by the MPS, the central bank and the foreign exchange regulator have busted underground banks that handled 200 billion yuan ($30.2 billion) in illegal money transfers this year.

Officials from the Guangdong provincial public security department said the police would keep cracking down on underground banking to ensure order in the financial system, Xinhua said.

Global Financial Integrity, a Washington-based watchdog, estimated that in the decade between 2004 and 2013 China was the world’s biggest source of illicit outflows, accounting for about 28 percent of the $4.885 trillion in illegal funds moving from the 10 biggest source economies.