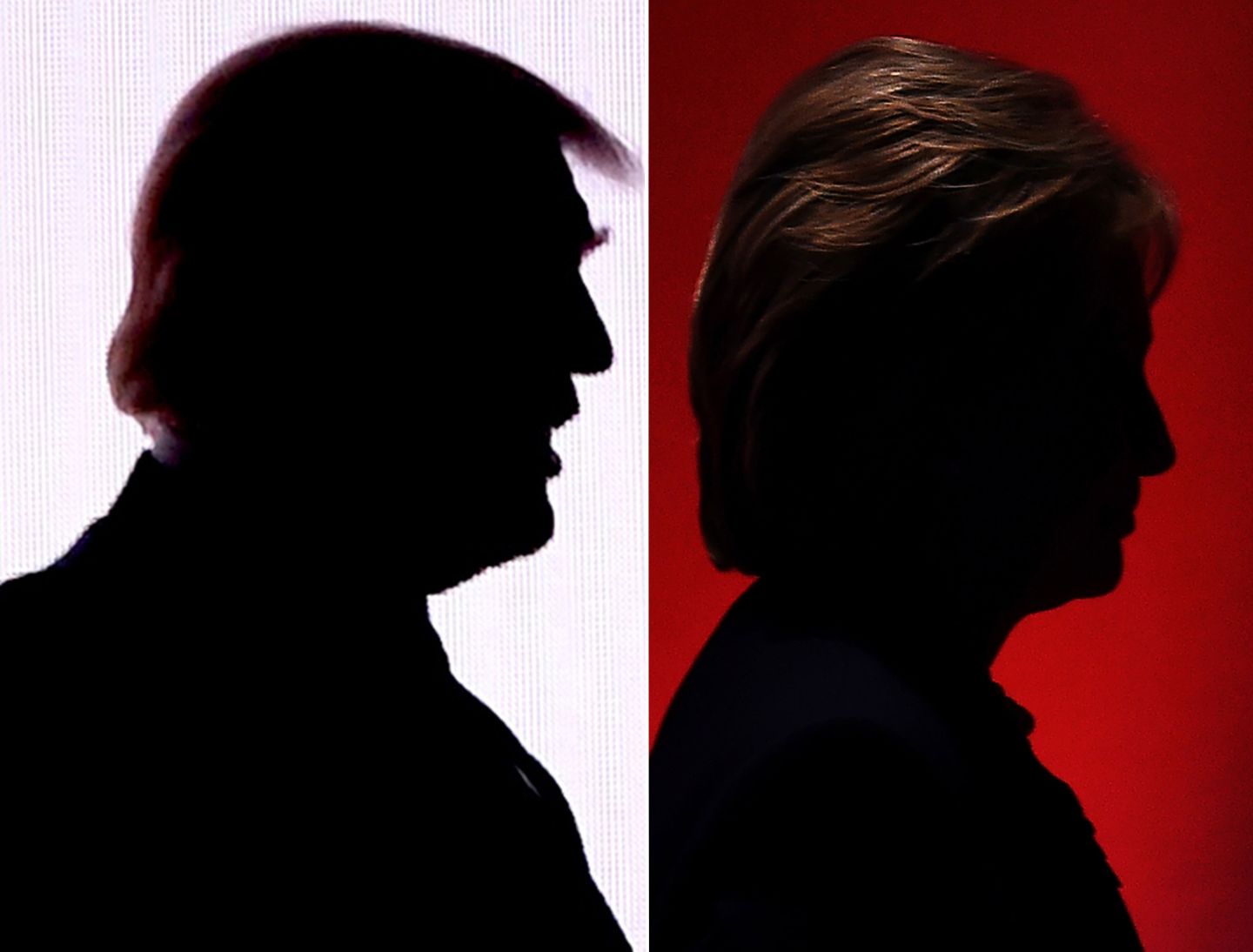 TOPSHOT - This combination of file photos shows the silhouettes of Republican presidential nominee Donald Trump(R)July 18, 2016 and Democratic presidential nominee Hillary Clinton on February 4, 2016. Hillary Clinton and Donald Trump prepared to square off September 26, 2016 in their first presidential debate -- a keenly awaited clash that comes as they sit nearly neck and neck in the polls. The debate, which is expected to be watched by tens of millions of Americans, could draw a record number of viewers when it kicks off at 9:00 pm EST (0100 GMT Tuesday). / AFP / DESK (Photo credit should read DESK/AFP/Getty Images)
DESK/AFP/Getty Images

A top adviser to Hillary Clinton on Tuesday accused a longtime Donald Trump aide of receiving “advance warning” about WikiLeaks’ plans to publish thousands of hacked emails and suggested the Republican candidate is aiding the unprecedented Russian interference in American politics.

Clinton adviser John Podesta pointed the finger at Trump adviser Roger Stone, who he said has been in touch with WikiLeaks founder Julian Assange. Podesta also raised as evidence an August tweet in which Stone said Podesta’s “time in the barrel” was coming. The tweet was sent shortly after WikiLeaks published scores of hacked emails from other Democratic officials.

“I think it’s a reasonable assumption, or at least a reasonable conclusion, that Mr. Stone and the Trump campaign had advance warning about what Assange was going to do,” Podesta told reporters aboard the Clinton campaign plane. Podesta acknowledged the evidence was “circumstantial.”

Podesta confirmed that the FBI is investigating the hack of his private email account as part of the ongoing probe in other Democratic Party hackings by groups with Russian ties. Last week, intelligence officials said they believe the individuals responsible are working for Russian intelligence and coordinating with Assange on the political hacking.

Podesta said Russia’s actions may be driven by Trump’s policy positions, which he said are more in line with Russian foreign policy than U.S. foreign policy. But he also suggested the driving force could be “Mr. Trump’s deep engagement and ties with Russian interests in his business affairs.”

Russian Ambassador to the U.S. Sergey Kislyak dismissed the accusations as untrue.

“We are watching very carefully the election campaign in this country,” Kislyak said Tuesday at a discussion of bilateral affairs at Johns Hopkins University’s campus in Washington. “We don’t interfere (in) the internal affairs of the United States, neither by my statements nor by electronic or other means.”

Clinton has repeatedly accused her opponent as being soft on Russia, pointing to his praise of Russian President Vladimir Putin as a strong leader, his suggestion that he would rethink sanctions against Russian officials, his sharp criticism of NATO and other policy positions.

While Podesta didn’t directly accuse Trump of assisting with Russia’s meddling with American campaigns, he suggested Trump was either “willfully ignoring” intelligence officials’ warnings about Russian government involvement or “an unwitting agent of the Russian Federation.”

The Clinton campaign would not confirm the authenticity of Podesta’s leaked emails, noting that Russian hackers often fabricate documents.

“The pattern is they hack, they leak truthful things, and then they build up to leaking documents that are either doctored or wholly fabricated,” said Jennifer Palmieri, Clinton’s communications director.

WikiLeaks dropped the first batch of Podesta’s emails shortly after news organizations released a video in which Trump is heard making sexually predatory comments about women. That video has deeply damaged Trump’s campaign, leading several Republicans to revoke their support for the businessman.

Podesta said the timing of his emails’ release was an “awfully curious coincidence.”

“Mr. Assange wanted to change the subject,” Podesta said. “He didn’t succeed in doing that.”