These Voters Were Seriously Turned Off by the ‘Cringe-Worthy’ Debate 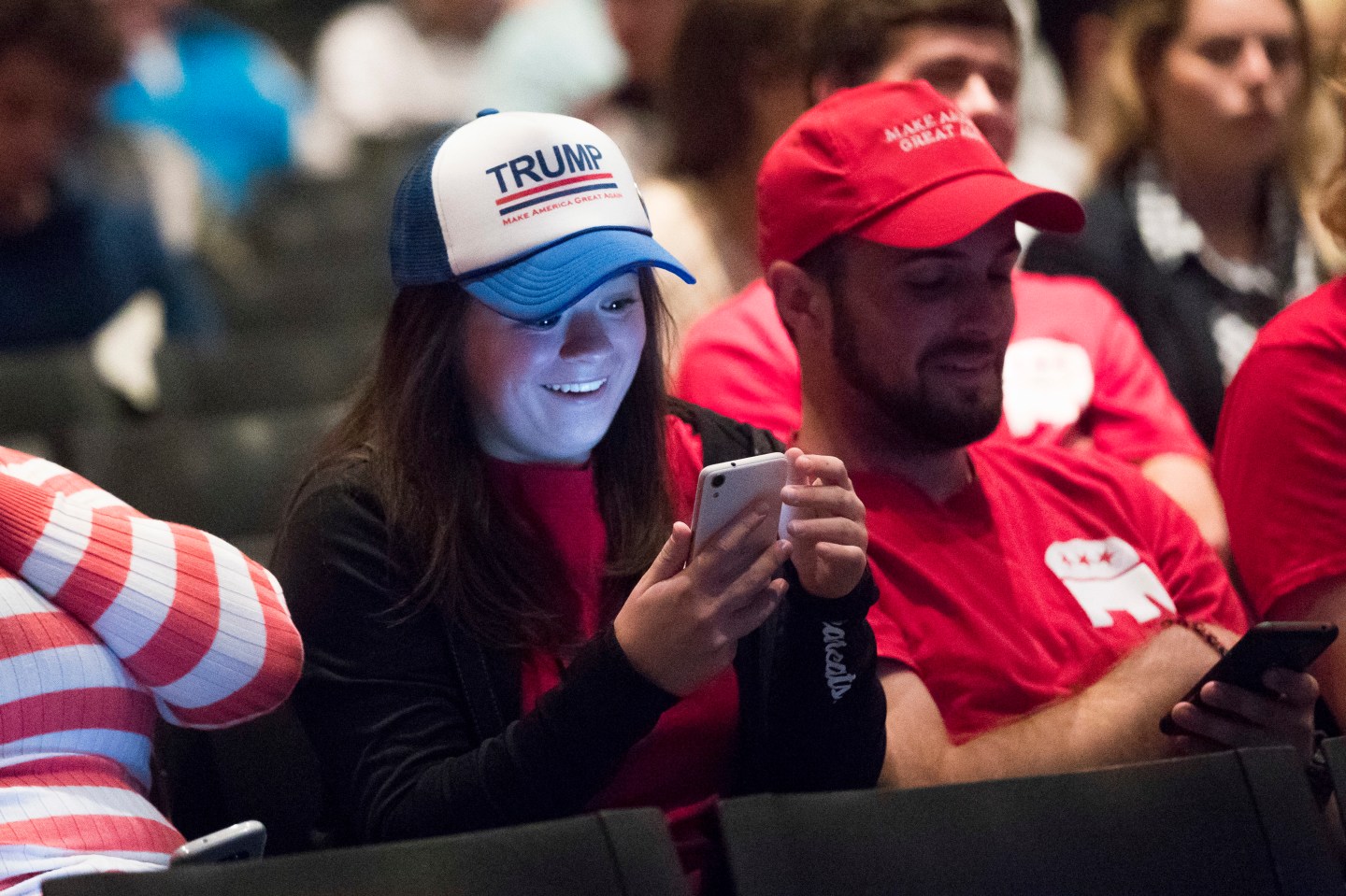 Days after explosive revelations about Donald Trump’s predatory comments about women and Hillary Clinton’s closed-door speeches to banking executives, some people who watched the U.S. presidential debate Sunday night were so disgusted they said they wouldn’t vote or were weighing a third-party candidate or write-in option.

“I feel that it is wrong that these are the two choices I have,” said Patrick Trombetta, a Bernie Sanders supporter trying to decide between Clinton, Green Party candidate Jill Stein or writing Sanders in on the ballot.

Here are stories of voters watching the debate around the country:

Looking for a Conservative in Nevada

John Burns, 42, is a registered Republican and self-described conservative upset with his choices because he said both seem like Democrats. He took in the debate from a Las Vegas restaurant at a watch party organized by the Clark County Republican Party, where attendees howled with laughter as Trump attacked Hillary Clinton.

Raised Mormon, Burns works at a casino and uses a wheelchair after being paralyzed in a motorcycle accident. He said his disability can make it hard to get jobs, and the thought of people taking welfare benefits or abusing the system bothers him.

Burns said the 2005 video in which Trump bragged about women letting him kiss and grope them was off-the-record “locker-room banter” and thinks women can be just as bad in private.

“I think it shows a human side. I think it’s the politicians who are trying to make a political point,” he said.

Burns pumped his fist as Trump described a plan to repeal and replace the Affordable Care Act. His deductible went from $500 to $3,000, and his boss told him it was a result of the law.

But he also said he doesn’t “believe Trump’s conservatism. I think it’s what he’s saying to get himself elected.”

The Verdict: Burns said he’s “almost ready to just sit this vote out because I’m so fed up with both sides.”

“The whole thing is just terrible for me; it’s like a car accident you can’t look away but you want to,” said the 38-year-old stay-at-home mom.

Fein wasn’t swayed by Trump brushing off his vulgar talk about women as “locker room comments.”

“I think that just perpetuates rape culture,” she said.

The Verdict: Fein plans to vote for Clinton after supporting Sanders in the Democratic primary.

Backing a Different Woman in Pennsylvania

Cheyanne Dawson, 22, of West Chester, Pennsylvania, watched the debate with co-workers at a restaurant and said it didn’t change her disdain for both candidates.

“They’re not good representations of what we want them to be,” Dawson said. Clinton “just says what people want to hear, and so does Donald Trump, but you want someone to be genuine, authentic, and I don’t think either of the candidates are like that.”

She is especially disappointed with Clinton because she has high expectations for the first female president—”someone you can look up to”—and thinks Clinton lies and lacks passion.

But Dawson dismissed Trump immediately as a “social media” phenomenon with bizarre policies that “wouldn’t benefit us.”

The Verdict: She plans to vote for Stein.

Matthew Forsythe, 26, a freelance digital marketer and website designer, is torn between voting for what he sees as a “sad,” unhinged reality TV star and a “mechanical,” secretive political insider.

He watched the debate with his friend Zack Rodgers in a bar in West Chester. Rodgers, a Democrat who supported Barack Obama in 2008, is voting for Trump because he says he just can’t trust Clinton. Forsythe defended her, saying fact-checkers said her statements were truthful.

Still, “there just seems like a lot of unanswered questions,” Forsythe said of Clinton, particularly her email servers.

Though Forsythe thinks Trump would do better with the economy, he’s worried that Trump is “lacking empathy” with other cultures.

The 2005 video in which Trump bragged about women letting him kiss and grope them because he is famous didn’t faze Forsythe, who’s more worried about his lack of experience.

“He’s said derogatory things about people throughout his entire campaign, so one more derogatory statement that comes out is like—’OK.’ I feel desensitized to the type of rhetoric I keep hearing,” Forsythe said.

The Verdict: Forsythe left disappointed and no closer to deciding whom to vote for.

Andy Fox, 24, a server at Lansing Brewing Co., said he supported Sanders “to try something new” and is reluctant to vote for Clinton or Trump because “they’re both criminals.”

Fox watched parts of the debate during his shift in Lansing. He said it did not assuage his fear that regardless of who is elected, “something really terrible is going to happen” in the next four years.

With Clinton, he said, there will be “more wars” and with Trump, a “racial divide.”

Fox credited Clinton for talking about health care, but otherwise “it’s just like high school banter” between the candidates—much too personal criticism and not nearly enough policy discussion, he said.

The Verdict: Fox said he probably will not vote.

Elliot Fladen, 36, a lawyer in suburban Denver, doesn’t know if he can bring himself to choose Clinton but he says he can’t vote for fellow Libertarian Gary Johnson because he’s scared Trump may win.

“I’ve never voted for a Democrat in my life,” Fladen said before the debate. “But can I sit by and let this delusional con-man Donald Trump become president? I don’t think I can.”

Fladen, whose wife was born in Mexico, started reviling Trump’s approach to international affairs after he insulted Mexican immigrants.

Fladen frequently shook his head during the debate, laughing when Trump said he respects women. But he didn’t warm to Clinton, either.

“Every time Hillary Clinton opens her mouth, half of me wants to gag and say, ‘I could never vote for this person,'” Fladen said. “But then Trump opens his mouth, and it’s like, ‘Well, I guess she is the lesser of two evils.'”

The Verdict: Fladen prefers Johnson but is leaning toward Clinton to stop Trump.

Patrick Trombetta, 53, of Cary, is an independent who would never vote for Trump but also has trouble with Clinton.

“I just disagree with her on a lot of issues,” he said. “She says a lot of the right things—I just don’t know that I believe her.”

Sitting in his living room, the former medical device sales manager and twin brother, Steve, were visibly disgusted by Trump’s comments on several topics, including allegations of sexual misconduct against Bill Clinton.

As for Hillary Clinton, Trombetta said he was impressed with some of her answers and how she apologized for putting classified State Department emails on her private server. But he also felt she was hypocritical and disingenuous in other responses.

Worried About Islamaphobia in Washington State

Irkan Abdullahi, 26, a university student, watched the debate at a civic center in Seattle where most of the crowd of around 100 people appeared to support Clinton, often cheering after her lines and laughing at Trump’s claims. She said Trump doesn’t respect women.

“It’s ridiculous. I mean he’s just saying things that he shouldn’t,” she said.

Abdullahi, who is Muslim, said she liked that Clinton talked about her religion.

“The things that she said really made feel good about this country and being here. When it came to Donald Trump, the things he said were very hurtful,” she said.

The Verdict: Abdullahi will vote for Clinton.

Jasmine Santana, 29, of Las Vegas watched the debate with her 7-year-old son. She’s already decided she’s going to vote for Clinton but wanted to see how Trump responded to the release of the 2005 recording.

She said it was hard to listen to, and it hit home that her son would be hearing about it and she would have to explain it to him.

She said Trump embarrassed himself in Sunday’s debate.

“He wanted the heat off of him. He tried to redirect everything,” said Santana, who’s a medical assistant. “I think he looked like a bully.”

She said she was blown away by her son’s reaction and took to Facebook to share it.

“He said, ‘I think Donald Trump is rude and a liar. He says he cares about Americans but he only cares himself,'” Santana said.

The Verdict: She will vote for Clinton.

William Martin, 21, from Tallahassee, was a Johnson supporter and was not happy about the libertarian’s exclusion.

Martin watched with a group of mostly Republican supporters at a restaurant, where some chuckled when Trump said he had “great respect for women.”

The crowd responded favorably when Trump said he would put Clinton “in jail” over classified State Department emails on her private server.

“I did feel like Clinton was more professional than Trump was, but some comments he made held merit. I think both had very balanced stances,” Martin said.

Martin liked Trump’s point about going after the Islamic State group and was interested in hearing how both candidates would handle health care and any alterations to the Affordable Care Act.

The Verdict: Martin is leaning toward Trump, though many of his views favor Johnson.

Looking for a Leader in Indiana

Kimberly Bradford, 42, a compliance analyst in Indianapolis and a Clinton supporter, took issue with Trump’s fingerpointing.

“The problem with that is when you’re constantly blaming someone for something and never offering any type of solution, it makes me feel like you’re not qualified,” she said.

Bradford said it was “deplorable” that after Trump dismissed his crude comments about women as locker room behavior, he would “pull a stunt” of appearing with women who accused former President Bill Clinton of sexual assault or unwanted advances.

She said she wants a president who is levelheaded, and Clinton looked like a leader at the debate.

“She answered as best she could, I felt like he was taking those personal digs, and she didn’t really succumb to that,” Bradford said.

The Verdict: Bradford is voting for Clinton.