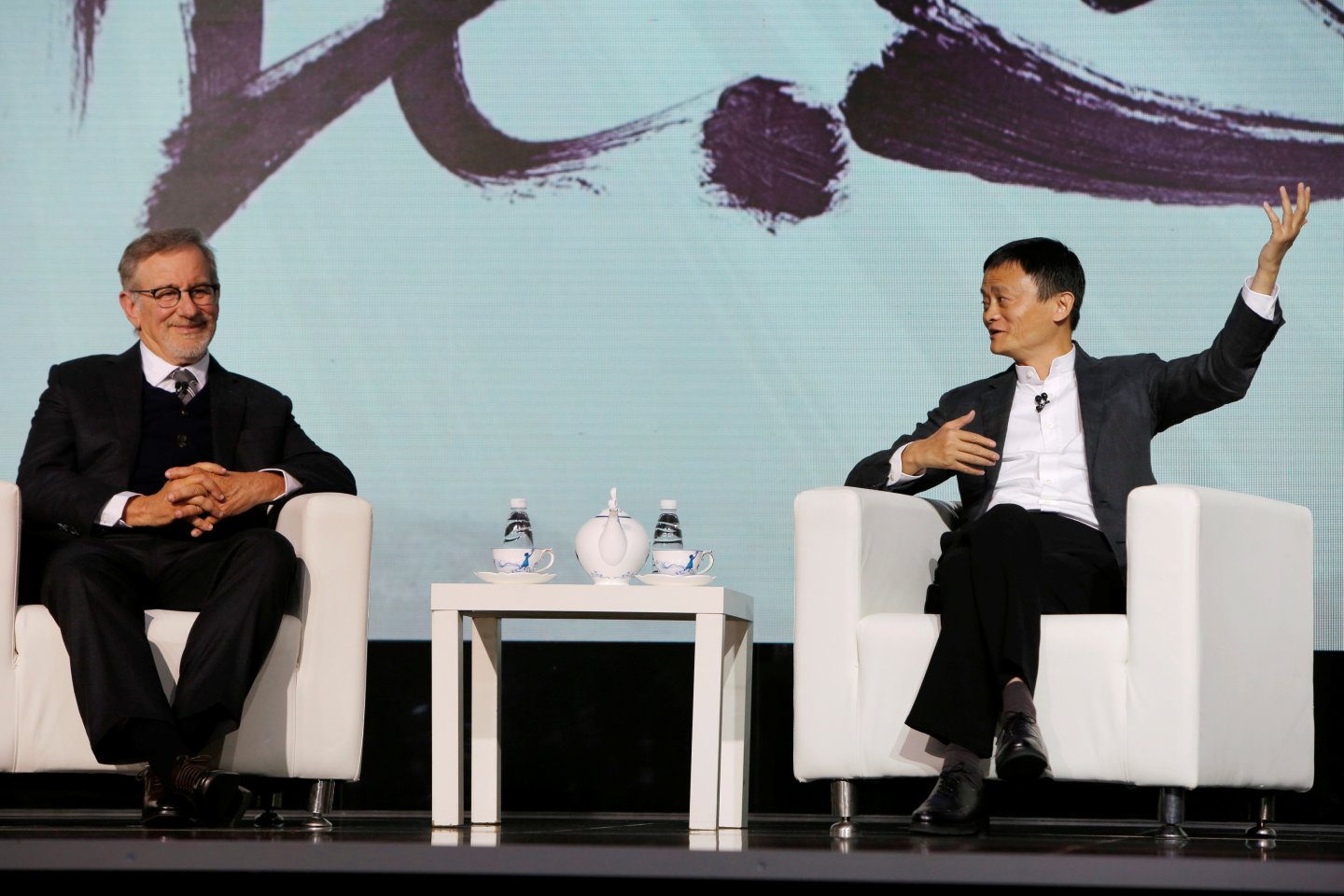 There were no details about the deal released. Instead, they highlighted the cooperation between sides—one, an eminence in Hollywood, the other, China’s top tech titan—that will result in co-produced movies for both Chinese and global audiences. Alibaba and Wanda Group, which is in the running to buy Dick Clark Productions, are fighting for influence in the world’s second largest box office market.

But what was intended as Hollywood boilerplate banter between Jack Ma and Steven Spielberg on stage Sunday came out mostly as a disjointed, halting, and at times strange half an hour exchange.

“I’ve always felt myself [that] I’ve looked like an alien,” Spielberg said early on. “A lot of people feel alienated from everyone else. And that’s why sometimes films find an audience. I think all of us privately feel like aliens.”

Spielberg’s treatment of alienation in general, and more specifically his 1982 hit film E.T. the Extraterrestrial, came up in the beginning of the press conference. Not only because is popular within China, but also because on Chinese social media Jack Ma’s appearance is regularly subject to snide comparisons to that of an extraterrestrial.

Moderator Jiang Xiaohan, the host of CCTV’s film channel, asked Ma, “How do you feel about people calling you ‘alien’ all the time?”

“I absolutely don’t have any superpowers,” Ma answered. “I share with the aliens the E.T. We’re both strange looking and we’re both very kind. But I’m very excited to make this deal with Steven because I never thought in my life I’d see this legendary director.”

Amblin, formerly DreamWorks Studios, is Spielberg’s production company. Before rebranding itself after an injection of financing from Comcast (CMCSA) last year, its slate of movies had disappointed over previous years. But it has found success in China, thanks to prototypical global blockbusters like Jurassic World, and its recasting of U.S. disappointments like Need for Speed to a Chinese audience.

With Alibaba Pictures, a subsidiary of Alibaba Group (BABA), Spielberg’s group gets an eager Chinese partner. In its bid to become a player in the world’s second largest box office market, Alibaba has been financing handfuls of Hollywood movies while operating a popular online ticket system.

The moderator Jiang on Sunday asked how their co-productions would bridge the cultural differences between the East and West. Eastern cultures are known for collectivism, she explained, while the West prizes individualism and superheros.

“Right now the superhero movie is what’s popular all over the world. Not just China,” Spielberg responded. Plus, he added, “I don’t make a lot of superhero movies.”

“I think that China and USA in the west, there are cultural differences,” Ma said. “But I don’t see any human, value difference between West and East. The only difference is the West can tell the story better than Chinese. “

“You guys in the morning say, How is the weather? We ask, Have you had breakfast? This is the big difference, because we’ve been hungry for so many years,” he said. “But in the U.S., you guys go hunting; hunting you need to get up early, you want to see good weather. So we have a culture difference, but the human values are all the same.”

The unusual example of cultural differences was followed by a fluff question that yielded a similarly bizarre answer.

The moderator asked: what if Spielberg and Ma switched roles? What kind of movie would Ma make?

Ma answered that he’s already made a film. “I’ve been directing Alibaba for so many years. This is the piece I told 10 years ago my colleagues: Alibaba, Taobao, Alipay is a piece of art to give to the world. It’s a movie. It’s everybody’s teamwork.”

The moderator asked if Alibaba’s a film, what’s the climax?

“We survive. Long, healthy, and happy,” he said.

And five minutes later, the press conference was over.