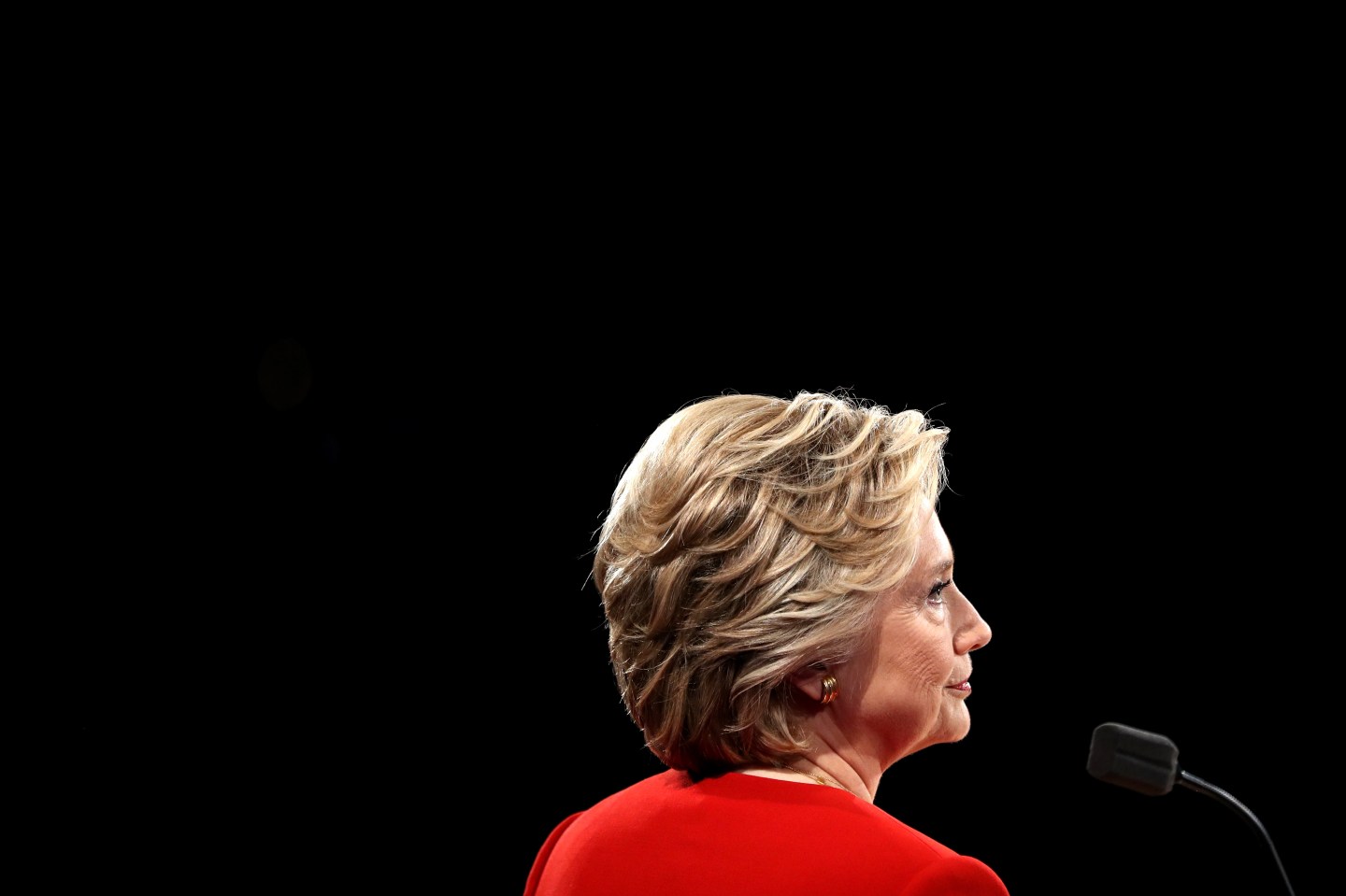 In the deafening roar that blew across television networks, front-page newspapers and Americans’ kitchen table conversations after the release of a recording of Donald Trump bragging about groping women, one voice was noticeably silent: Hillary Clinton.

In the hours after the video broke, pundits yelled the word “p-ssy” on television. A rock-ribbed Republican governor and GOP members of Congress from Utah, West Virginia and Alabama called on Trump to step down as the nominee, along with some 30 other stalwart party lawmakers who said voters should not support the nominee. Melania Trump was remorseful. Her husband’s words, she said in a statement, “are unacceptable and offensive to me.”

Trump’s own running mate threw his hands up. “I do not condone his remarks and cannot defend them,” said Republican Gov. Mike Pence. “We pray for his family.”

But the Clinton campaign, with its legions of staff and surrogates, mostly observed the fray from the sidelines.

Clinton aides tweeted a few scattered remarks. From the candidate’s official Twitter account, staff tweeted the original Washington Post story on the video with words of outrage: “This is horrific. We cannot allow this man to become president.” In another tweet from the campaign, Clinton called on women to “stop Trump.” A few tweeted out links asking people to volunteer.

This is horrific. We cannot allow this man to become president. https://t.co/RwhW7yeFI2

But more than 23 hours after the election-shaking video broke, the candidate herself had said nothing. And the campaign, which often to reacts to events on a hair trigger, sent out no message on the debacle, which seemed it could deliver a death knell to Trump’s campaign. Few Clinton surrogates went on television to attack Trump.

Instead, Clinton’s campaign left it to Republicans to hang themselves on Trump’s words while they watched it all burn from afar.

At the campaign’s Brooklyn headquarters, staffers sat glued to their computer and television screens, watching Republicans trip over themselves to defend Trump. Some aides took to Twitter as the Republican defections came in, but there was little internal guidance as Trump’s slim chances to win the White House seemed to dissolve in slow motion. How, or whether Clinton herself would address Trump’s incendiary remarks on Sunday night’s debate remained unclear.

Priorities USA Action, the primary super PAC supporting Clinton, began working on ad content behind the scenes, but did not immediately jump into the fray. The spokesman for the group, Justin Barasky, said the group did not plan to significantly change its message after the release of the video.

In the 2005 video first released by the Washington Post, Trump is heard bragging about making sexual attempts on married women. The Republican nominee, who had already been married to his current wife Melania for less than a year, spoke lewdly of a woman he sought to sleep with. “I did try to f-ck her,” he said.

It was the kind of video that brings presidential campaigns crashing to the ground, and Trump, for all his previous vulgar and mean-spirited comments targeting Mexicans, Muslims, and women, finally seemed to cross a bridge too far. Republican rapidly defected and Clinton aides gingerly stepped back.

Throughout the presidential campaign, Democrats have been divided over whether to paint Trump as an anomaly, or to strap the Republican Party to his outbursts. The Democratic National Committee has been more insistent on blaming the GOP for Trump’s rise, tying Republicans to Trump’s candidacy. The Clinton campaign, meanwhile, has aggressively sought endorsements from Republicans, and tended to denounce Trump without so clearly connecting his failures to the party.

On Friday night, shortly after the video was published, the DNC released a statement aimed at bringing Republicans down with Trump.

“Donald Trump’s offensive, degrading, and disgusting comments about women revealed today are beyond the pale and don’t bear repeating,” said interim DNC chair Donna Brazile. “The only remaining question is whether Republicans will continue to stand by him and call him a role model for our children?”

Speaker Paul Ryan was scheduled to appear with Donald Trump at a rally in Wisconsin, but disinvited Trump after the video was released. Republican National Committee chair Reince Priebus denounced Trump’s comments in a statement.

Republicans are acutely aware of the crisis they face. If they continue to support their nominee, they are effectively endorsing the most disliked major party nominee in history, one who many voters believe is lewd and bigoted.

That perception is true in swing states, even among his supporters.

“He is a short-fingered vulgarian,” Jennifer Harvey, a former librarian who will vote in eastern Ohio, said earlier this week at a Clinton rally.

And at least now, Hillary Clinton doesn’t have to say anything to prove Harvey’s point. She will let the Republicans do the work for her.