4 States Declare Emergency as Hurricane Matthew Closes in on Florida 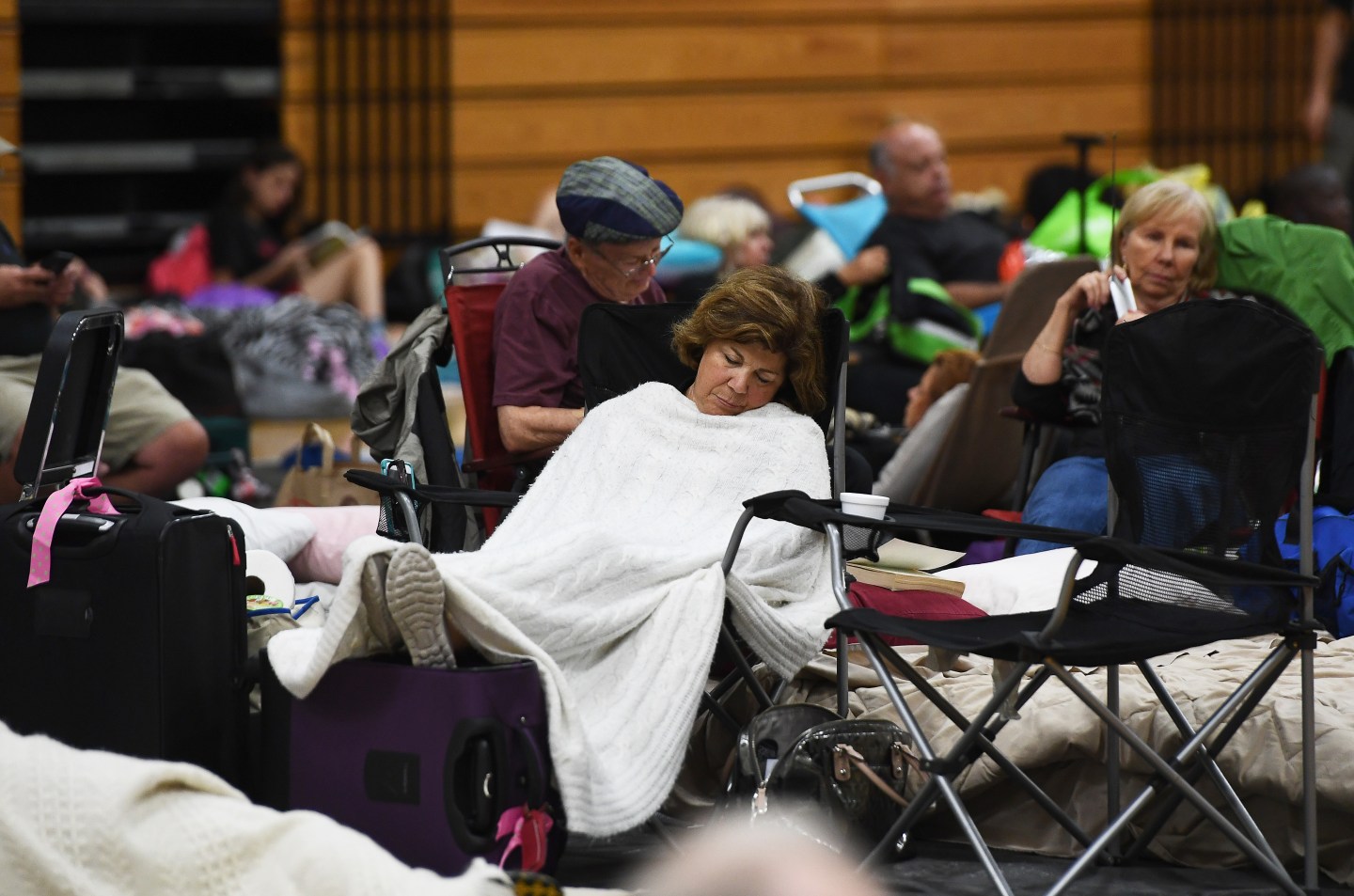 Local residents take shelter at the Pedro Menendez high school in St. Augustine, Florida, on October 6, 2016, ahead of hurricane Matthew. Some 1.5 million people are under evacuation orders in Florida in preparation for mighty Hurricane Matthew to make a direct hit on the state, the governor said Thursday. Matthew has already killed 27 people as it barreled its way through the Caribbean, with the Bahamas the last to be hit. / AFP / Jewel SAMAD (Photo credit should read JEWEL SAMAD/AFP/Getty Images)
JEWEL SAMAD/ AFP/ Getty Images

Matthew, the first major hurricane threatening a direct hit on the United States in more than 10 years, lashed Florida on Friday with heavy rains and winds after killing at least 339 people in Haiti on its destructive march north through the Caribbean.

Although the hurricane was downgraded to a Category 3 storm as it approached the U.S. mainland, winds gusts of up to 70 miles per hour (113 kph) and heavy downpours were still reported across coastal communities in Florida, the National Hurricane Center said in an advisory.

“We are just bracing and the winds are picking up,” Daytona Beach Mayor Derrick Henry told CNN early on Friday. “A great number of our residents have taken heed to our warnings and we are certainly concerned about those that have not.”

More than 140,000 Florida households were without power, according to Governor Rick Scott. In West Palm Beach, once lit street lights and houses went dark and Interstate 95 was empty as the storm rolled through the community of 100,000 people.

Matthew’s winds had dropped on Thursday night and into Friday morning, downgrading it to a Category 3 on the five-step Saffir-Simpson scale of hurricane intensity, where it could either plow inland or tear along the Atlantic coast through Friday night, the Miami-based center said.

Few storms with winds as powerful as Matthew’s have struck Florida, and the NHC warned of “potentially disastrous impacts.”

The U.S. National Weather Service said the storm could be the most powerful to strike northeast Florida in 118 years.

Hurricane conditions were expected in parts of Florida on Friday and a dangerous storm surge was expected to reach up to 11 feet (3.35 meters) along the Florida coast, Ed Rappaport, deputy director of the Miami-based NHC, said on CNN.

“What we know is that most of the lives lost in hurricanes is due to storm surge,” he said.

Damage and potential casualties in the Bahamas were still unclear as the storm passed near the capital, Nassau, on Thursday and then out over the western end of Grand Bahama Island.

The last major hurricane, classified as a storm bearing sustained winds of more than 110 mph (177 kph), to make landfall on U.S. shores was Hurricane Wilma in 2005.

Jeff Masters, a veteran hurricane expert, said on his Weather Underground website (www.wunderground.com) that Matthew’s wind threat was especially serious at Cape Canaveral, which juts into the Atlantic off central Florida.

“If Matthew does make landfall along the Florida coast, this would be the most likely spot for it. Billions of dollars of facilities and equipment are at risk at Kennedy Space Center and nearby bases, which have never before experienced a major hurricane,” Masters wrote.

NASA and the U.S. Air Force, which operate the nation’s primary space launch site at Cape Canaveral, have already taken steps to safeguard personnel and equipment.

A team of 116 employees was bunkered down inside Kennedy Space Center’s Launch Control Center to ride out the hurricane.

“We’ve had some close calls, but as far as I know it’s the first time we’ve had the threat of a direct hit,” NASA spokesman George Diller said by email from the hurricane bunker.

‘AS SERIOUS AS IT GETS’

Roads in Florida, Georgia and North and South Carolina were jammed, and gas stations and food stores ran out of supplies as the storm approached early on Thursday.

Scott warned there could be “catastrophic” damage if Matthew slammed directly into the state and urged some 1.5 million people there to evacuate.

“If you’re reluctant to evacuate, just think about all the people … already killed,” Scott said at a news conference. “Time is running out. This is clearly either going to have a direct hit or come right along the coast.”

Scott, who activated several thousand National Guard troops to help deal with the storm, warned that millions of people were likely to be left without power.

Florida, Georgia and South Carolina opened shelters for evacuees. As of Thursday morning, more than 3,000 people were being housed in 60 shelters in Florida, Scott said.

Those three states as well as North Carolina declared states of emergency, empowering their governors to mobilize the National Guard.

President Barack Obama called the governors of the four states on Thursday to discuss preparations for the storm. He declared a state of emergency in Florida and South Carolina, a move that authorized federal agencies to coordinate disaster relief efforts. Late Thursday, Obama declared an emergency in Georgia and ordered federal aid to the state.

“Hurricane Matthew is as serious as it gets. Listen to local officials, prepare, take care of each other,” Obama warned people in the path of the storm in a posting on Twitter.

Hundreds of passenger flights were canceled in south Florida, and cancellations were expected to spread north in coming days along the storm’s path, airlines including American Airlines, Delta Airlines and United Airlines said.

At 2 a.m. EDT (0600 GMT), Matthew was about 80 miles (125 km) southeast of Florida’s Cape Canaveral, the hurricane center said. It was heading northwest at about 14 mph (22 kph) and was expected to continue on this track through the early part of Friday. The center said the storm is expected to gradually weaken during the next 48 hours.

In Florida, fuel stations on Thursday afternoon posted “out of gas” signs after cars waited in long lines to fill up. At a Subco gas station in Orlando, the pumps had run dry on Wednesday.

The shop was a stopping point for coastal residents seeking shelter inland. Among them was Jonas Sylvan, 44, of Melbourne, Florida, who planned to hole up in a hotel with his wife, two daughters and dog. “We’re just trying to get away from the coast,” he said. “It’s safer here.”