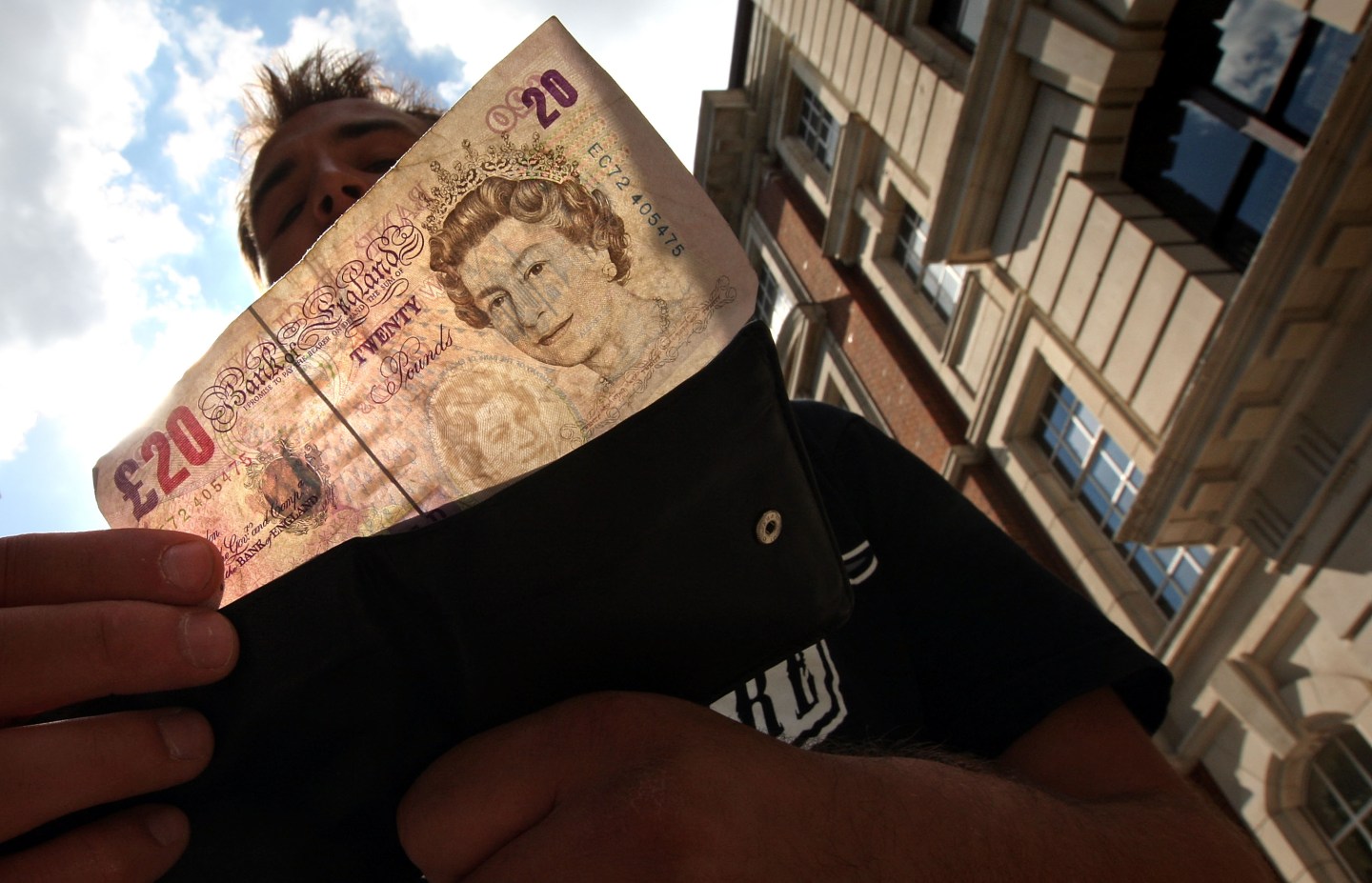 LONDON - JUNE 17: In this photo illustration, a man takes a 20 pound note from his wallet outside a bank on June 17, 2008 in London, England. The governor of the Bank of England has stated that inflation could rise above 4 percent this year as a result of increasing prices of energy and food. (Photo by Cate Gillon/Getty Images)
Photograph by Cate Gillon—Getty Images

Sterling plunged to a 31-year low in a matter of minutes on Friday, in what traders said was a “flash crash” driven by computer-initiated sell orders that left the currency on track for its worst week since the Brexit vote in June.

The pound has been under pressure for most of this week on growing anxiety that Britain will undergo a “hard” exit from the European Union. On Friday, it dived about 10% from levels around $1.2600 to $1.1378 in a matter of seconds, in thin early Asian trade.

However, Thomson Reuters, which owns the Reuters foreign exchange brokerage platform RTSL, said an outlying trade had been canceled and that the low was revised to $1.1491—still the weakest level for sterling since 1985.

The drop in Asia came after French President Francois Hollande said the EU needed to remain firm with Britain, after it appeared Prime Minister Theresa May had opted for a tougher exit from Europe.

“Of course, some in the market may see sterling’s overnight volatility to be the result of French President Hollande demanding tough Brexit negotiations,” said Hans Redeker, head of currency strategy at Morgan Stanley.

“The new British government under May appears to have chosen an economic course which could bear substantial risks.”

Global markets have been on edge in recent days on worries about Britain’s exit from the EU and about May’s comments on loose monetary policy, which some saw as a thinly veiled attack on the Bank of England.

Many investors think May’s government is leaning towards a hard Brexit, where Britain gives up full access to the single market in order to impose full control on its borders. Some fear that could hinder trade and constrict the foreign investment needed to fund Britain’s huge current account deficit, one of the biggest in the developed world.

Sterling is on track for a weekly loss of around 4%, trading below $1.25 and removing various technical support levels on the move lower, spooking traders, including computer-driven algorithms.

“Thus, the pound has been the victim of the digital, headline-driven world that we live in. For sterling, algorithms have become the modern-day version of a George Soros.”

The weakness in the British pound helped support the dollar before U.S. jobs data later on Friday. The dollar index was up 0.3% at 97.093, its highest since late July.

The employment report is expected to show U.S. nonfarm payrolls rose by 175,000 jobs in the month, according to the median estimate of 100 economists polled by Reuters. A strong report would increase bets that the U.S. central bank is gearing up to raise interest rates in December.