Gary Johnson: What Clinton and Trump Won’t Tell You About Entitlements 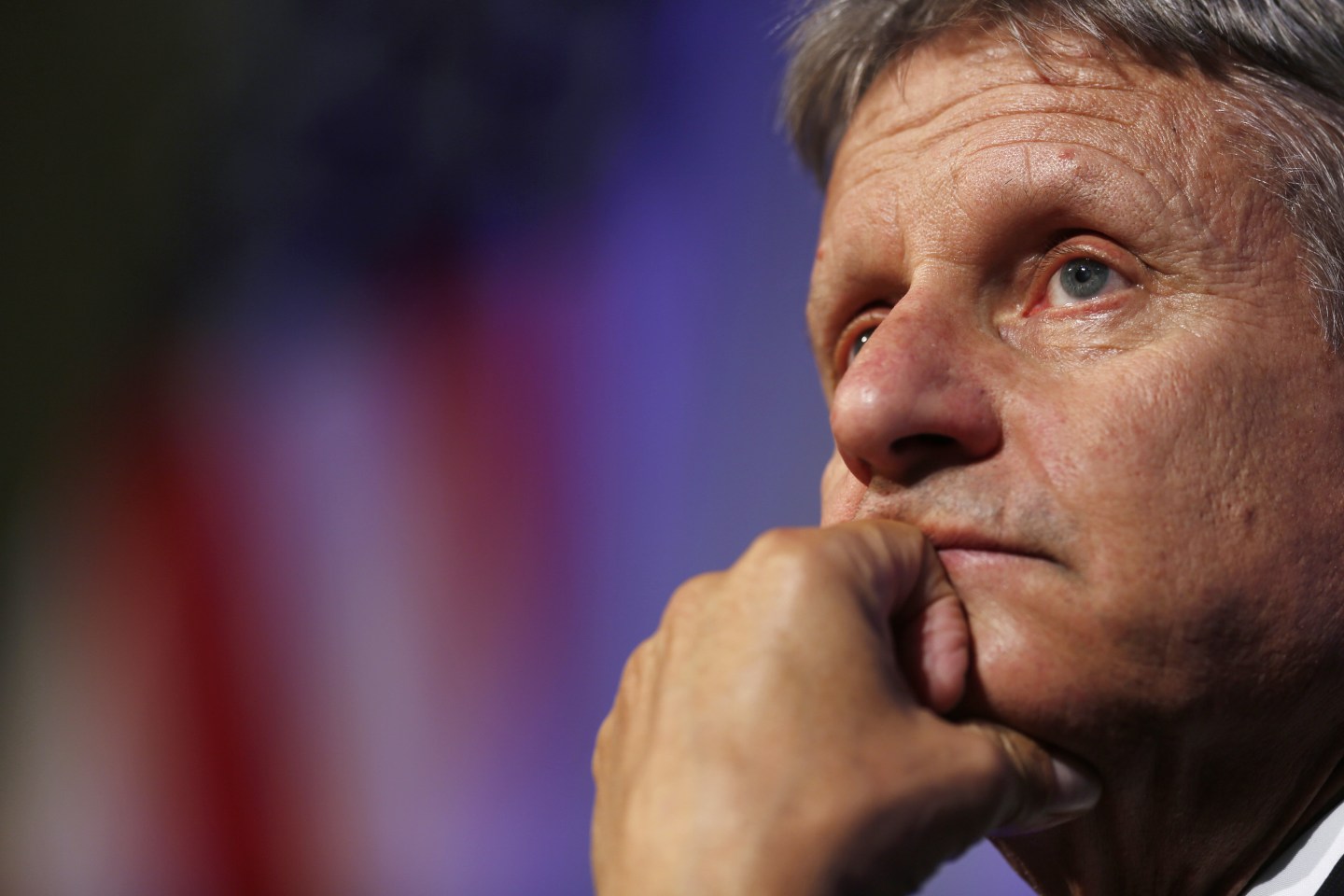 Gary Johnson, 2016 Libertarian presidential nominee, listens to questions from audience members during a campaign event at Purdue University in West Lafayette, Indiana, U.S., on Tuesday, Sept. 13, 2016. Johnson said he was "incredibly frustrated" with himself after failing to recognize the name of the Syrian city of Aleppo in a TV interview last week. Photographer: Luke Sharrett/Bloomberg via Getty Images
Luke Sharrett—Bloomberg via Getty Images

“We’re gonna save your Social Security without making any cuts. Mark my words,” Donald Trump said during a rally in February of this year. Hillary Clinton echoed those words in a tweet at about the same time: “I won’t cut Social Security.”

Both candidates seem to be promising that the status quo is sustainable, and that our current trajectory won’t require any significant adjustments. But both candidates aren’t being straight with the American people, and they know that. So does anyone else who reads their personal assessment of future benefits sent out at the beginning of each year by the Social Security Administration.

“Your estimated benefits are based on current law,” each statement says. “Congress has made changes to the law in the past and can do so at any time. The law governing benefit amounts may change because, by 2034, the payroll taxes collected will be enough to pay only about 79 percent of scheduled benefits.”

Medicare faces even greater shortfalls. The current projection is that the Medicare trust fund will be insolvent by 2028, two years sooner than predicted in 2015. That ought to spur Congress to act, but the reality is that 2028 is three presidential elections away, an eternity in politics. Since none of the candidates running this year could be president then, they are more than happy to kick the can down the road and let someone else worry about it. Of course, “someone else” includes anyone who will be elderly or in need of health care after 2028.

The promise to not cut those programs really means: Let the train wreck happen. A 21% reduction in Social Security benefits for all retirees would be devastating. Yet neither Clinton nor Trump is willing to tell the truth about our entitlements, let alone do anything to fix them.

There’s a reason for that. Social Security has long been considered the third rail of electoral politics. Medicare is treated exactly the same way. The demagoguery that accompanies even modest attempts at reform usually involve scary ads showing helpless senior citizens being tossed off of cliffs. These scare tactics are deplorable. Fear is a great motivator, but it shouldn’t be a campaign strategy. It’s far easier for both Republicans and Democrats to tell people what they want to hear, instead of telling the truth.

That’s unfortunate, because the truth is that these are solvable problems. Both Social Security and Medicare can be preserved, with relatively minor tweaks now that will pay great dividends later. For example, we could raise the retirement age, change the way the cost of living allowances are calculated and begin to limit some benefits based on income. There are many different proposals that could accomplish this, and we’ll have to put forward multiple proposals to make the transition to solvency work. Indeed, the longer we wait to fix the problem, the more painful the solutions become. Given that even the smallest proposed adjustment to the current system produces hysterical overreactions from all sides, it seems likely that any real fix will be postponed until drastic action becomes necessary. When that happens, it will do real damage to the lives of our seniors and to the economy as a whole. It’s simply irresponsible to avoid making tough choices now.

For elderly health care, as a governor of New Mexico who found significant savings in Medicaid without imposing hardships on those who needed help, I have no doubt that giving states a greater role in Medicare would produce innovation, better care, and, yes, solvency. I believe states have greater flexibility and capacity for experimentation than a one-size fits all federal approach, and they are far more likely to find workable solutions than a bloated Washington bureaucracy. We saw this kind of experimentation by states including Connecticut, Florida and Wisconsin, prior to the passage of federal-level welfare reform in 1996.

Politicians are insulting Americans when they claim they want to balance the federal budget, but pledge to not touch programs like Social Security and Medicare. It can’t be done. To be precise, it can’t be done without committing taxpayers to massive entitlement spending increases in the future and a choice between tax increases to match or running up our national debt far beyond its current level of nearly $20 trillion.

I’m not suggesting pulling the rug out from under those who depend on and have planned according to expected benefits from programs such as Social Security and Medicare. But can’t we just tell the truth, explain to the American people what needs to be done, and take modest steps that will secure those benefits for generations to come?

That shouldn’t be too much to ask of candidates who are asking for voters’ trust.

Gary Johnson is the Libertarian Party candidate for president and a former governor of New Mexico.