The Electric Car Revolution Is Making These Investors Very Optimistic 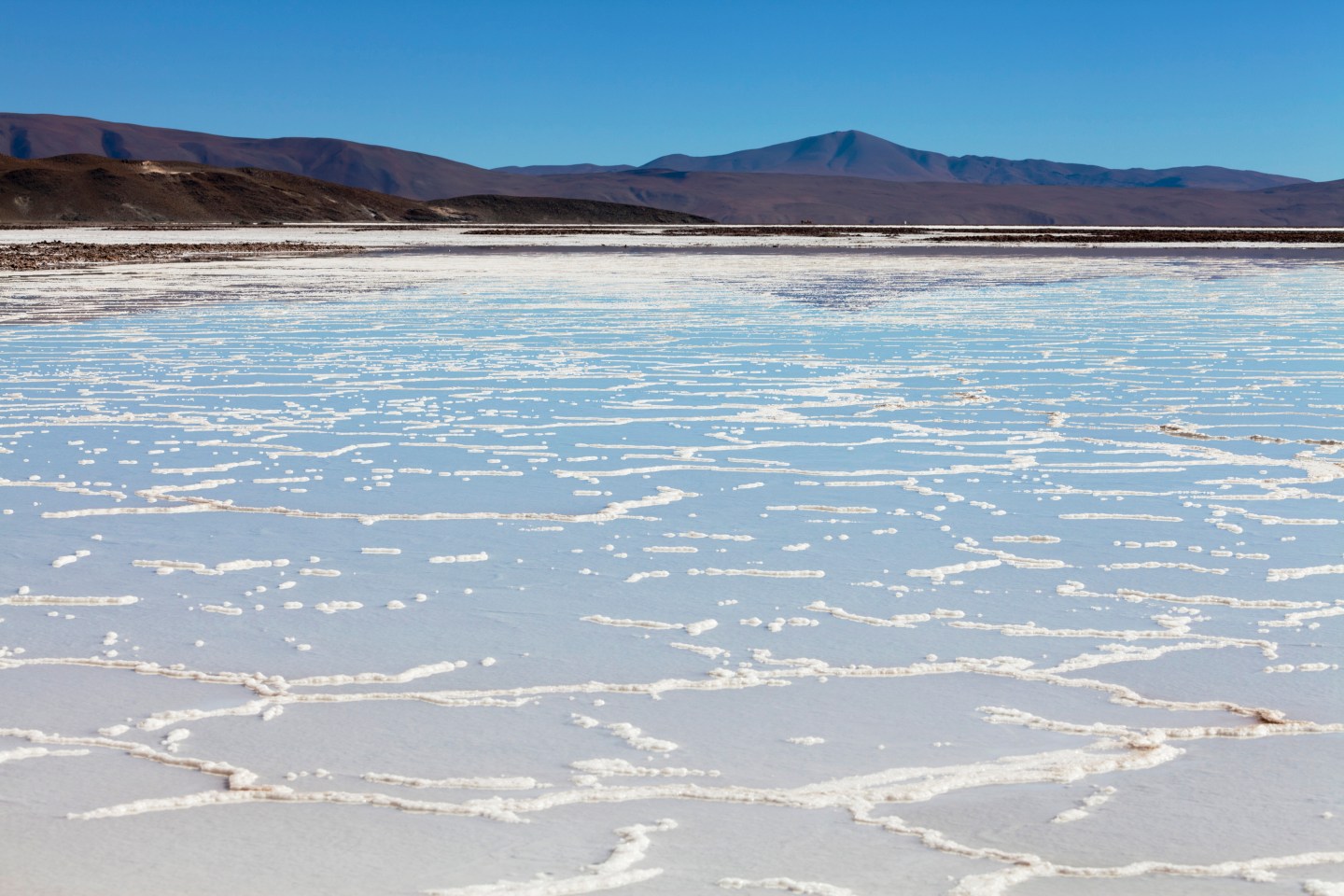 Salar del Hombre Muerto in northwestern Argentina is a salt pan, created when water repeatedly evaporates from a shallow lake, leaving behind a crusty layer of salt minerals. Unlike many salt pans in the region in and near the world?s driest desert, the Atacama Desert, Salar del Hombre Muerto receives enough rainfall to occasionally be covered by a thin layer of water. The water evaporates or percolates through the salt crust to form a layer of brine. The brine in Salar del Hombre Muerto is rich in lithium, an element used in a wide range of products from batteries to medication.
Photograph by Danita Delimont — Getty Images/Gallo Images

Electric cars such as the Nissan Leaf may look no different from the standard family runaround. But the new materials that go into them could revolutionize the market for metals used in the industry, opening up a new field for commodities investors.

“We identified electric vehicles as an area where we are at an inflection point for demand,” said Duncan Goodwin, portfolio manager of the Baring Global Resources Fund.

Around 12% of the fund’s $378.2 million in assets is exposed to materials that are used in electric vehicles. It has investments in New York-listed Albemarle and Australia’s Orocobre, two companies producing lithium, a key element in electric car batteries. Shares in both companies have risen sharply this year.

Governments, keen to push growth in electric cars in a bid to meet their carbon emissions targets, are tempting consumers with perks like subsidies, free parking and tax breaks. Growth in the market is in turn creating an opportunity for commodities investments currently estimated at $235 billion.

But it is not a simple one-way bet.

Predicting how much of any metal will be needed to meet demand for electric vehicles in the longer term is tough and advances in battery technology could alter the mixture.

Getting drivers to adopt electric cars remains a challenge—the need to charge them up frequently and time taken to do so have put off many potential buyers.

The number of electric and hybrid vehicles on the road worldwide surpassed 1 million last year, according to the International Energy Agency.

While estimates vary, IHS Automotive expects electric vehicles to represent nearly 4% of all light vehicles worldwide by 2020, equivalent to 3.9 million cars, up from just over 14,000 in 2010.

So what sits below the bonnet in these vehicles?

Much of the world’s lithium comes from an area called the “Lithium triangle” in Chile, Argentina, and Bolivia.

Mining it is an increasingly lucrative business.

Prices of battery grade lithium in China, the biggest lithium ion battery producer, surged to above $20,000 a tonne this summer, nearly three times higher than a year earlier, as demand grew.

Albemarle (ALB) is investing an undisclosed sum to boost its production of battery-grade lithium salts to try to supply half of that projected demand growth, said John Mitchell, the president of Albemarle’s lithium unit.

Australia’s Lithium Power International is preparing its Maricunga Salar project in northern Chile to be able to ship lithium directly to China for use in electric vehicles, and aims to be in production by 2019-2020.

Australian rival Orocobre (OROCF), whose share price has risen by more than 50% this year, has nearly completed a scoping study with the aim of at least doubling production capacity over the next two years at a facility in Argentina.

Among South American companies, Chile’s SQM announced this month that it was investing $30 million to boost its lithium hydroxide capacity by 7,500 tonnes.

“The market penetration of electric vehicles in the automotive market will have a significant impact on lithium demand,” it said.

Critics caution against expecting shortages of lithium as there is an abundance of it in the earth’s crust. Others warn against jumping too quickly into smaller companies that may not produce the high grade lithium needed for the batteries.

“It’s very much buyer beware, it’s a fast-moving market, and there is a large degree of ignorance about it,” Finntech analyst Martin Potts said, adding that graphite could be more interesting for investors.

Canada’s Eagle Graphite said while the impact of electric vehicles on its business is still to be felt, when global production hits around 1 million cars per year, the draw on graphite supplies will become significant.

“The more forward-looking manufacturers are rightly becoming concerned about long term supply,” its CEO Jamie Deith said. “Not only is there the question of producing enough graphite, but the fact that China accounts for 100 percent of natural graphite anodes today is an additional concern.”

“The battery industry has to diversify sources.”

Meanwhile cobalt prices, up 16% this year, are expected to rise another 45% by 2020. The U.S. Defense Logistics Agency starting to stockpile cobalt compounds highlights their importance.

Sherritt International, one of the largest cobalt producers, said it is set to increase cobalt production at its Ambatovy mine in Madagascar in line with nickel output.

As cobalt is mined largely as a by-product of other metals such as nickel and copper, it is hard for producers to crank up output in response to higher demand, it said. That lack of supply elasticity could push prices higher.

Not all metals used in car batteries have a rosy future. Demand for manganese, a common component in steel, is expected to remain weak in the near term as the steel sector suffers.

Predicting how much of any given metal would be needed to meet demand for electric vehicles in the longer term is tough and advances in battery technology could alter the amounts.

Metals such as nickel, cobalt and manganese may not be needed in batteries such as the lithium sulfur battery being developed by Oxis Energy, based in the English city of Oxford.

Also in the background are green vehicle technologies, most notably hydrogen fuel cells, being mooted as possible rivals to batteries. But developing new technology to the point where it can be commercialized takes time.

“We consider the risk of substitution of lithium to be very low,” said CRU Group’s Julia Ralph.

Guiding the silent, top-of-the-range Leaf around a showroom complex at Nissan London West, salesman Keith Almansury says education is the key to driving growth in the segment.

“If people don’t love electric cars, it’s because they don’t know about electric cars,” he said, flagging up benefits including environmental friendliness, savings on fuel and servicing, and free parking. “But above all, it’s just a really nice drive.”