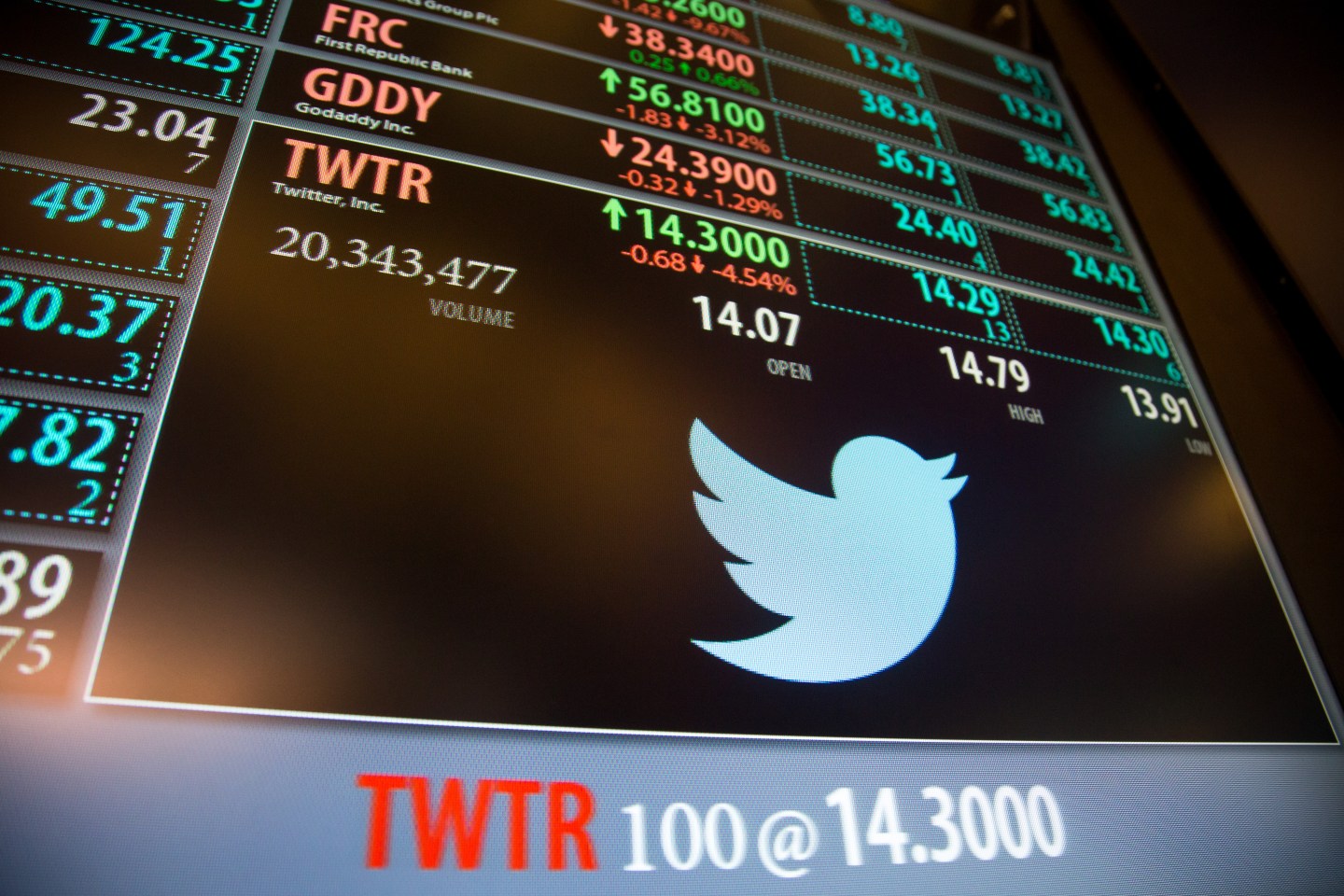 Ever since Twitter became a popular social network, people have been imagining it getting swallowed up by a bigger company. Back in 2009, some thought it a good fit for Google, orMicrosoft, or Apple. In some cases, companies tried: Google again, and also Facebook, and even Al Gore.

It never happened for a few reasons. First, Twitter’s board, including current CEO Jack Dorsey, simply didn’t want to sell. Later on, questions emerged over how Twitter would monetize its network and keep users coming, dimming the company’s appeal as a takeover target. But the most vital reason why Twitter hasn’t been bought — or seriously considered as an acquisition candidate — has been its high price.

Twitter (TWTR) went public in late 2013 at $26 a share, valuing it at $18 billion. After Facebook (FB) shares began to rally, investors bid up Twitter’s price as high as $69 a share. But after Twitter’s user growth flatlined and multiple efforts to boost its fortunes fizzled, the stock sank as low as $14 a share last June. But even at that nadir, when Twitter’s value was around $12 billion, the stock was still seen as too pricey. Net profit was nowhere in sight, quarterly sales were sluggish to flat, and the company still had no clear turnaround plan in sight.

So potential buyers have been biding their time hoping the stock price would keep falling. If Twitter has another disappointing quarter, its stock would surely slump again — a prospect that analysts have been signaling as likely by downgrading the stock. In that event, right now would be a prudent time to approach buyers. Twitter’s board has reportedly been considering a sale this month. And sure enough, names of potential buyers are being tossed around, starting with cloud computing firm Salesforce (CRM) and Google parent company Alphabet (GOOGL).

Twitter’s stock rallied 20% Friday on reports of the Alphabet and Salesforce rumors. One Salesforce exec fueled the fire by tweeting “why Twitter?” and listing four reasons — a bizarre move, given that the tweet made Twitter’s price 20% more expensive. Analysts quickly emerged to explain why a Salesforce-Twitter deal made little sense. The same day, another report cited Microsoft and Verizon (VZ) as potential suitors.

Such takeover rumors are common in the tech market. But they frequently end up being little more than speculation. After all, leaking out word to the financial press of a potential sale of the company is often a quick way to temporarily push up a stock’s price or to prompt fence-sitting buyers to jump into the ring.

The problem is, outside of Google, none of the potential deals make much strategic sense. Salesforce is an enterprise company and Twitter is primarily a consumer-facing service. Microsoft (MSFT), too, is moving toward the enterprise market; it also has its hands full with its $26 billion purchase of LinkedIn. Verizon (VZ), which itself is grappling with its Yahoo deal, has little potential for synergy with Twitter’s often unruly audience.

Things became even more interesting Monday when Disney (DIS) was said to be working with an advisor to evaluate a possible bid for Twitter. A Twitter-Disney combo is intriguing. With Vine, Periscope and live video tie-ins with the National Football League, Twitter has been moving toward becoming a video platform for some time. And Disney offers just that, primarily in ESPN’s live sports broadcasts, but also with ABC’s news broadcasts and big events like the Oscars.

For more, read: Disney Said to be Considering Takeover Bid for Twitter

Such events are already big draws for Twitter users, but Twitter has been struggling to tighten the integration in a way that enhances both the video content and the conversation around it. Under CEO Bob Iger, Disney has had a strong track record of buying properties like Marvel and Lucasfilm and seeing them flourish. But Disney is also facing a crisis of cord-cutting in cable channels like ESPN, which has long been a cash cow. Twitter could help Disney transition its cable audience to an online format.

Of course, Google parent Alphabet also remains a strong contender and a logical partner. Twitter has excelled at branded advertising, but struggled with the more lucrative targeted ads that turned Facebook into a digital ad powerhouse. Google’s massive user data could help here. In return, Twitter could bring Google the social network it could never build itself. (Remember Google Plus?) YouTube, a key growth engine at Google, could also benefit from closer ties with Twitter. As socially gifted companies like Facebook and Snapchat push hard into video, YouTube is looking vulnerable.

But if Alphabet wanted to buy Twitter, it could have done so when Twitter traded at $14 a share. Since then, Alphabet has become more cost-conscious, scaling back initiatives like Google Fiber, Nest, and robotics projects. And then there’s the question of how regulators in the U.S. and Europe would look at an Alphabet-Twitter deal. A Disney deal would likely win regulatory approval much more easily.

For more, read: Twitter’s Final Buyout Price Might Be Lower Than You Think

Thanks to the rally over the past couple of trading days, Twitter is again overpriced. It’s currently worth $20 billion, and the board will surely ask for more than that, especially if a bidding war breaks out. Yes, all of this remains speculative. What’s different is that, perhaps for the first time, the pieces are aligning to make a Twitter sale easier to imagine.