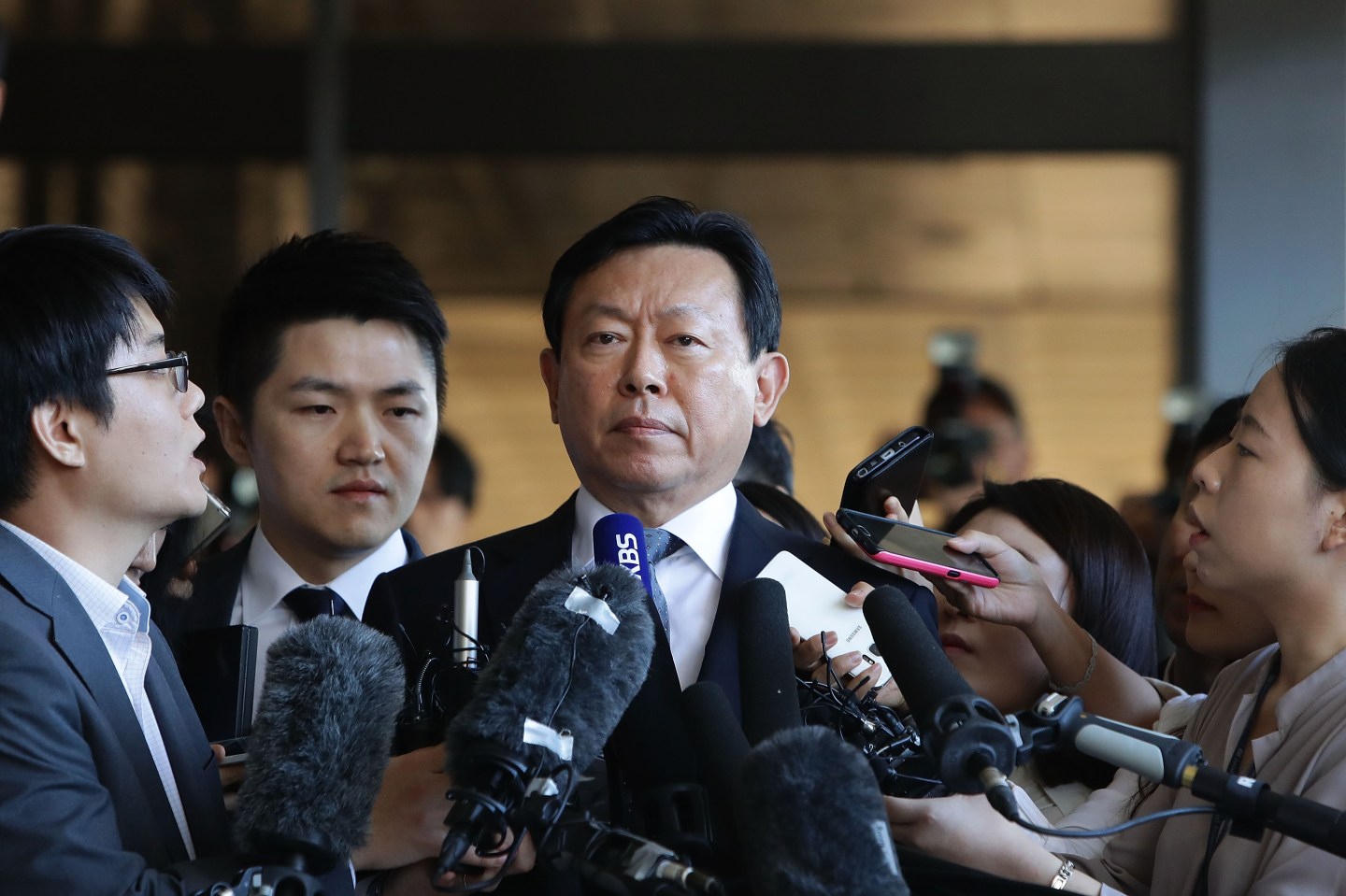 South Korean prosecutors asked a court on Monday to approve an arrest warrant for the chairman of the Lotte Group conglomerate on suspicion of embezzlement and breach of trust, a prosecution source with direct knowledge of the matter said.

The arrest warrant request comes after Lotte Chairman Shin Dong-bin, 61, was questioned by prosecutors in an investigation that has battered the country’s fifth-largest family-run business group since it became public in June.

It further adds to the uncertainty for the retail-to-chemicals group, which was riven last year by a bitter public feud between Shin and his older brother over who would succeed their father, the 93-year-old founder of the conglomerate.

The investigation into Lotte has already derailed a planned $4.5 billion initial public offering by the group’s Hotel Lotte arm, thwarted billions of dollars in potential acquisitions and served as the backdrop of the apparent suicide of one of the group’s top executives last month.

The prosecution source declined to be identified as he was not authorized to speak to media but the Lotte Group confirmed that prosecutors were seeking an arrest warrant and said that Shin will fully cooperate in the probe.

Analysts said the group would suffer if Shin were arrested.

“Under South Korea’s owner-dominated corporate governance structure, daily operations do continue even if the owner is arrested, but major decisions such as investment, M&A and government relationships are greatly affected,” said Park Ju-gun, head of research firm CEO Score.

Shares in the group’s Lotte Shopping Co Ltd fell 1.67 percent on Monday, worse than the 0.34 percent drop in the broader market <.KS11), and are down 9 percent since prosecutors began raiding company offices on June 10. Lotte Chemical Corp shares were down 0.35 percent on Monday.

The Seoul Central District Court was expected to hold a hearing “soon” to rule on the request for a warrant for activities involving about 170 billion won ($153.52 million), the prosecution source said.

See also: The Hedge Fund Trader Who Beat the Feds

A Seoul Central District Prosecutors’ Office spokesman confirmed the warrant request but declined to give details. A court spokesman could not immediately be reached for comment.

Since the probe began in June, the court has denied arrest warrant requests for other senior group executives, including the CEOs of Lotte Home Shopping and Lotte Chemical. However, Shin’s half-sister Shin Young-ja was arrested in July on charges of breach of trust and embezzlement in a separate, but related, prosecution probe.

After the court’s decision, prosecutors also plan to seek charges against Shin’s father Shin Kyuk-ho, as well as his elder brother, Shin Dong-joo, on suspicion of offenses such as tax evasion, the prosecution source said.

Chaebol, the family-run business groups such as Samsung, Hyundai Motor and SK, dominate Asia’s fourth-largest economy. In the past, some chaebol leaders have been charged for corporate crimes such as embezzlement or breach of trust.

The top-down chaebol structure that allows for quick decision-making that has partly fueled the conglomerates’ expansion in past decades can also create bottlenecks.

The CJ Group, whose chairman Lee Jay-hyun was arrested in July 2013 on charges including embezzlement and was given a presidential pardon last month, last year cited Lee’s jail sentence as a factor in “considerable difficulties” the group had in executing investment plans.

Lotte’s woes could also hinder Hotel Lotte’s bid to win back a lucrative license for a downtown Seoul duty free shop. The customs agency that awards duty free licenses has said it would judge bidders on criteria including their charitable record and public opinion.

Applications for new duty free licenses are due by Oct 4.