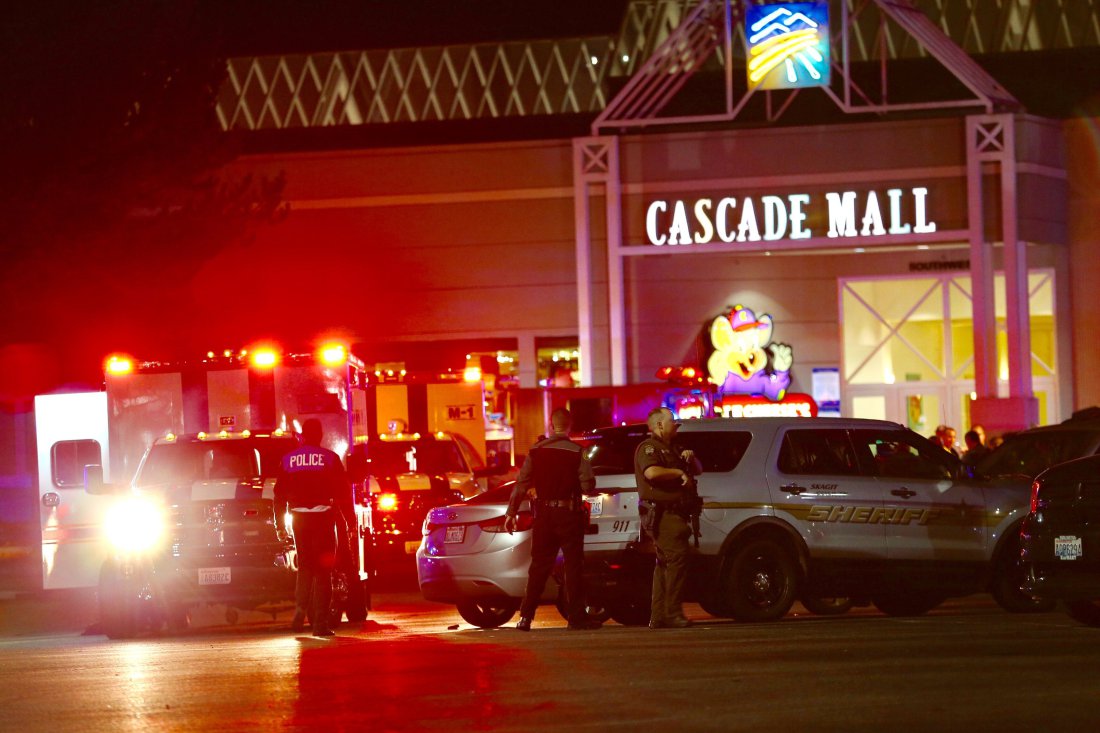 Law enforcement officers work at the crime scene outside of Cascade Mall in Burlington, Wash., where several people were fatally shot on Friday, Sept. 23, 2016. Authorities in Washington State say several people have been killed during a shooting at the mall north of Seattle and that at least one suspect remains at large. Sgt. Mark Francis says authorities are searching for a man wearing gray who was last seen walking toward Interstate 5 from the mall. (Dean Rutz/The Seattle Times via AP)
Dean Rutz AP

The 20-year-old suspect in the deadly Washington state mall shooting said nothing and appeared “zombie-like” when he was arrested by authorities nearly 24 hours into an intense manhunt, authorities said.

Island County Sheriff’s Lt. Mike Hawley said he spotted Arcan Cetin from a patrol car Saturday evening in Oak Harbor, Washington, and immediately recognized him as the suspect who killed five people at the Cascade Mall in nearby Burlington.

Hawley said at a news conference they had received information that Cetin, of Oak Harbor, was in the area. Cetin, who immigrated to the U.S. from Turkey, is a legal permanent resident who has been living in Oak Harbor, authorities said. He had been arrested once before in the county for assault, Hawley said.

“I literally hit my brakes, did a quick turn, I jumped out,” Hawley said. “We both jumped out with our guns, and he just froze.”

Cetin was unarmed and was carrying a satchel with a computer in it.

“He was kind of zombie-like,” Hawley said.

The suspect’s arrest capped a frantic search following the slayings of five people the day before.

The first 911 call came in just before 7 p.m. on a busy Friday at the Cascade Mall: A man with a rifle was shooting at people in the Macy’s department store.

By the time police arrived moments later, the carnage at the Macy’s makeup counter was complete. Four people were dead, and the shooter was gone, last seen walking toward Interstate 5. The fifth victim, a man, died in the early morning hours Saturday as police finished sweeping the 434,000-square-foot building.

“There are people waking up this morning, and their world has changed forever. The city of Burlington has probably changed forever, but I don’t think our way of life needs to change,” Burlington Mayor Steve Sexton said Saturday at a news conference.

Authorities said it now appears the rifle was brought into the mall from the suspect’s vehicle that was there, Mount Vernon police Lt. Chris Cammock said Saturday night.

Cetin has not been charged, Cammock said. He will be booked into the Skagit County Jail and is expected to appear in Skagit County District Court on Monday.

The newspaper reports Cetin also was arrested for drunken driving.

Cetin was told by an Island County District Court judge on Dec. 29 that he was not to possess a firearm, the newspaper reported.

However, the stepfather urged the judge not to impose a no-contact order, saying his stepson was “going through a hard time.”

As the small city absorbed the tragic news, critical questions remained, including the shooter’s motive.

Initially the suspect was described as Hispanic, but Hawley said that was based on initial witness statements to the shooting at the mall.

Surveillance video captured the suspect entering the mall unarmed and then recorded him about 10 minutes later entering the Macy’s with a “hunting type” rifle in his hand, Cammock said.

The identities of the victims—four women who ranged in age from a teenager to a senior citizen—were withheld pending autopsies and notification of family. The identity of the man who was fatally shot was also withheld and may not be released until Monday.

Earlier Saturday as police scrambled to find the shooter, the small city about 60 miles (97 kilometers) waited and worried.

The community of 8,600 people is too far from Seattle to be a commuter town, but its population swells to 55,000 during the day because of a popular outlet mall, retail stores and other businesses. Burlington is the only major retail center within 30 miles (48 kilometers) in a region where agriculture is king.

Residents gathered Saturday to comfort each other at a community gathering in a city park.

“It’s too scary. It’s too close to home,” said Maria Elena Vasquez, who attended the gathering with her husband and two young children.

Those who survived were still trying to process what happened as their community became the latest entry on a list of places known by the rest of world for mass shootings.

For more on gun violence, watch:

Joanne Burkholder, 19, of nearby Mount Vernon, was watching the movie The Magnificent Seven in the mall’s theater when security guards came in and told them to evacuate immediately. Dozens of panicked moviegoers gathered in the hallway, and Burkholder heard screaming as the officers escorted them to safety in a parking lot.

As she drove home later, she had to pull over because she was shaking so hard, she told The Associated Press.

“I’m just very thankful for my life this morning. I’ve never been so terrified in my life,” she said Saturday, trying to hold back tears as she attended the community vigil.

People who believed they may have lost loved ones were being sequestered at a church three blocks from the mall, where counselors and a golden retriever therapy dog were present.

The Seattle Times reported that one of the victims in the deadly Washington state mall shooting is a 16-year-old girl.

Sarai Lara’s mother said she had survived cancer as a young girl and was a happy student.

Evangelina Lara told the newspaper through a translator that she was shopping Friday night at the Cascade Mall in Burlington, Washington, with Sarai and her younger sister, but they split up.

Evangelina Lara says it was confirmed at 2 a.m. Saturday that her daughter was among the five people killed.

Dozens of people attended a Saturday evening prayer service for the victims. The gathering was held at Central United Methodist Church in nearby Sedro-Woolley, Washington.

The Rev. Cody Natland lit five candles on a table in front of the church, one for each victim.