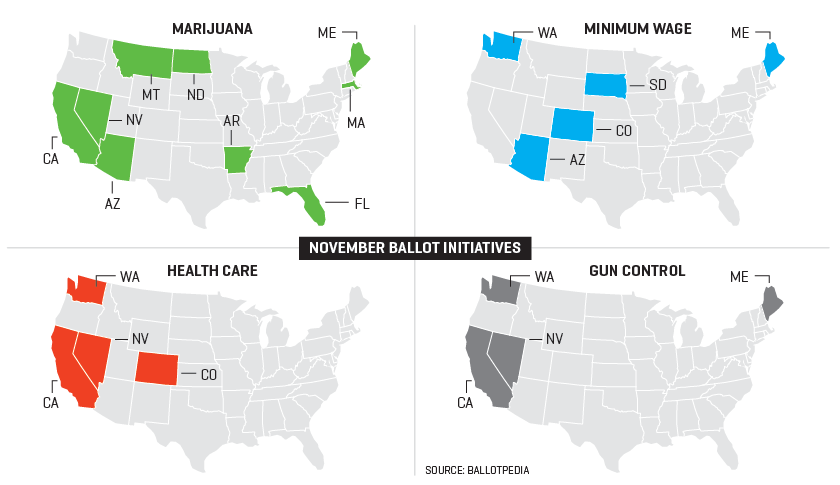 The chance to weigh in on an unusually consequential presidential contest and control of both chambers of Congress will draw millions to the polls this Election Day. But the stakes are higher still for voters in a number of states that are putting explosive policy decisions directly in voters’ hands through referendums. Here’s a look at some ballot initiatives that could drive turnout in swing states while resetting the course in key debates.

Legal recreational pot use, already on the books in four states, could be vastly expanded this fall when five states weigh in on the issue, and four more vote on medical marijuana. If the measure for recreational legalization passes in California, where it’s polling well, it would create easily the largest weed market in the world.

Three of the five states considering a minimum-wage change could also help tip the presidential election. Democrats hope initiatives to hike the pay standard in Arizona, Colorado, and Maine will drive their base to show up at the polls, lifting Hillary Clinton’s bid in the process.

For more on 2016 elections, watch this Fortune video:

Of the health care initiatives on the ballot this year, none has drawn as much attention—or money—as Prop. 61 in California. Voters there will decide whether to limit what state agencies pay for prescription drugs to the price paid by the U.S. Department of Veterans Affairs. Drug companies are spending millions to sink it.

Gun control advocates frustrated by congressional inaction are aiming for progress in four states. Once again, California is pushing the progressive frontier, proposing a ban on large-capacity magazines.

A version of this article appears in the October 1, 2016 issue of Fortune with the headline “Power to the People.”