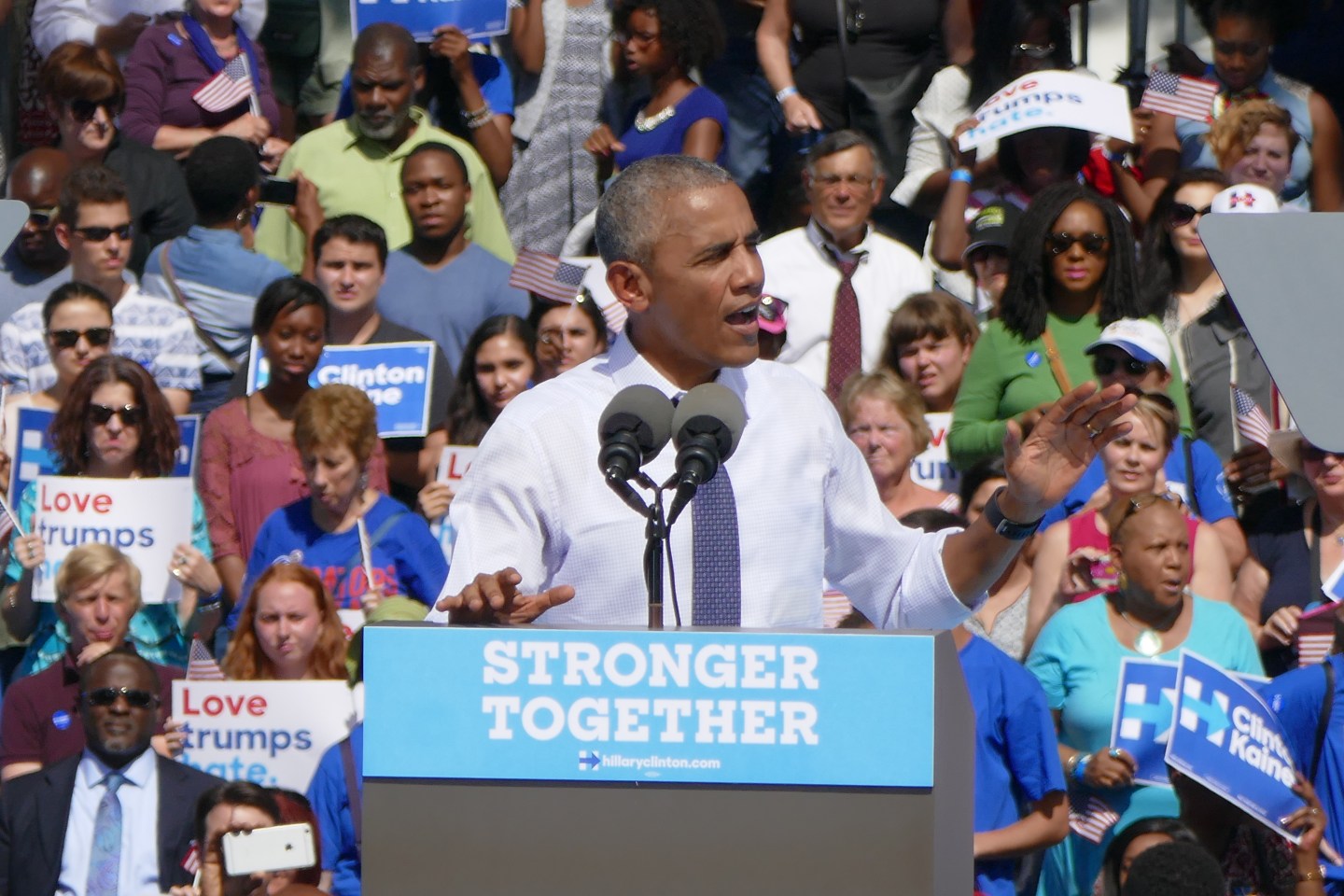 President Barack Obama stumped for Hillary Clinton after seven weeks off of the trail, attacking rival Donald Trump with some of his harshest language yet.

Obama took swipes directly at Trump, a name he tends to skate around during policy speeches, saying the Republican nominee “is not fit in any way, shape, or form to represent this country abroad or to be its commander-in-chief.”

The president appeared not far from where he last spoke on behalf of Clinton in July at the Democratic National Convention, saying Tuesday that Clinton’s Republican rival Donald Trump’s vision for America is dark, pessimistic and goes against the values he believes the U.S. represents.

The president also reiterated his message from the convention, affirming his belief that Clinton is the only person in the race poised to take on the tough task of the presidency. “I believe there has never been a man or a woman who is more qualified to serve as our president,” Obama said to cheers.

The president’s remarks seem to have come right in the nick of time for the Democratic nominee, whose week has gotten off to a rocky start. After nearly fainting and keeping the press in the dark about her whereabouts and health, the candidate has spent the past two days resting at home while she battles pneumonia.

See also: What Happens if Hillary Drops Out for Health Reasons

Meanwhile, the Republican nominee and his surrogates are slamming Clinton over remarks she made at a high dollar fundraiser last week where she said half of Trump’s supporters fit into a “basket of deplorables,” calling them racist, xenophobic, homophobic, sexist, and Islamaphobic. During an event in Baltimore on Monday, Trump said the remarks “revealed [Clinton’s] true thoughts.”

“She revealed herself to be a person who looks down on the proud citizens of our country as subjects for her to rule over,” Trump said.

Obama admitted this campaign season has frustrated him, largely because of the ways Clinton and Trump have been treated in the press. On one hand, he griped about the criticism Clinton has taken throughout the campaign. That criticism has stemmed from the private email server she held during her time as secretary of state and a general lack of transparency, which was on display this week when her campaign waited to share details about her health. On the other, Obama argued that the U.S. “cannot afford to act as if there’s some equivalence here” between the two candidates, saying Trump has tried to turn the campaign into a “reality show” and does not understand the magnitude of the position he’s seeking to hold.

The Republican nominee was a major target of the president, who said Trump is “not really a plans guy, a facts guy” and even questioned his business sense. Most business people, Obama said, obtain success without leaving a “trail of lawsuits, workers who didn’t get paid” and workers who “feel like they got cheated.”

“This is the guy you want to be championing working people?” a bemused Obama asked, joking that “the Donald” doesn’t want working people living in his condominiums or playing on his golf courses. “He spent most of his life staying as far away of working people as he could. And now this guy is going to be the champion for working people?”

The president also took issue with Trump’s fondness for Russian President Vladimir Putin, who Trump’s praise for has evoked fear in his Republican colleagues. “I have to do business with Putin,” Obama said. “But I don’t go around saying that’s my role model.”

Obama also touted his own record, pointing to a new Census Bureau report showing American household income on the rise. He even bragged that gas prices were had dropped drastically since he took office.