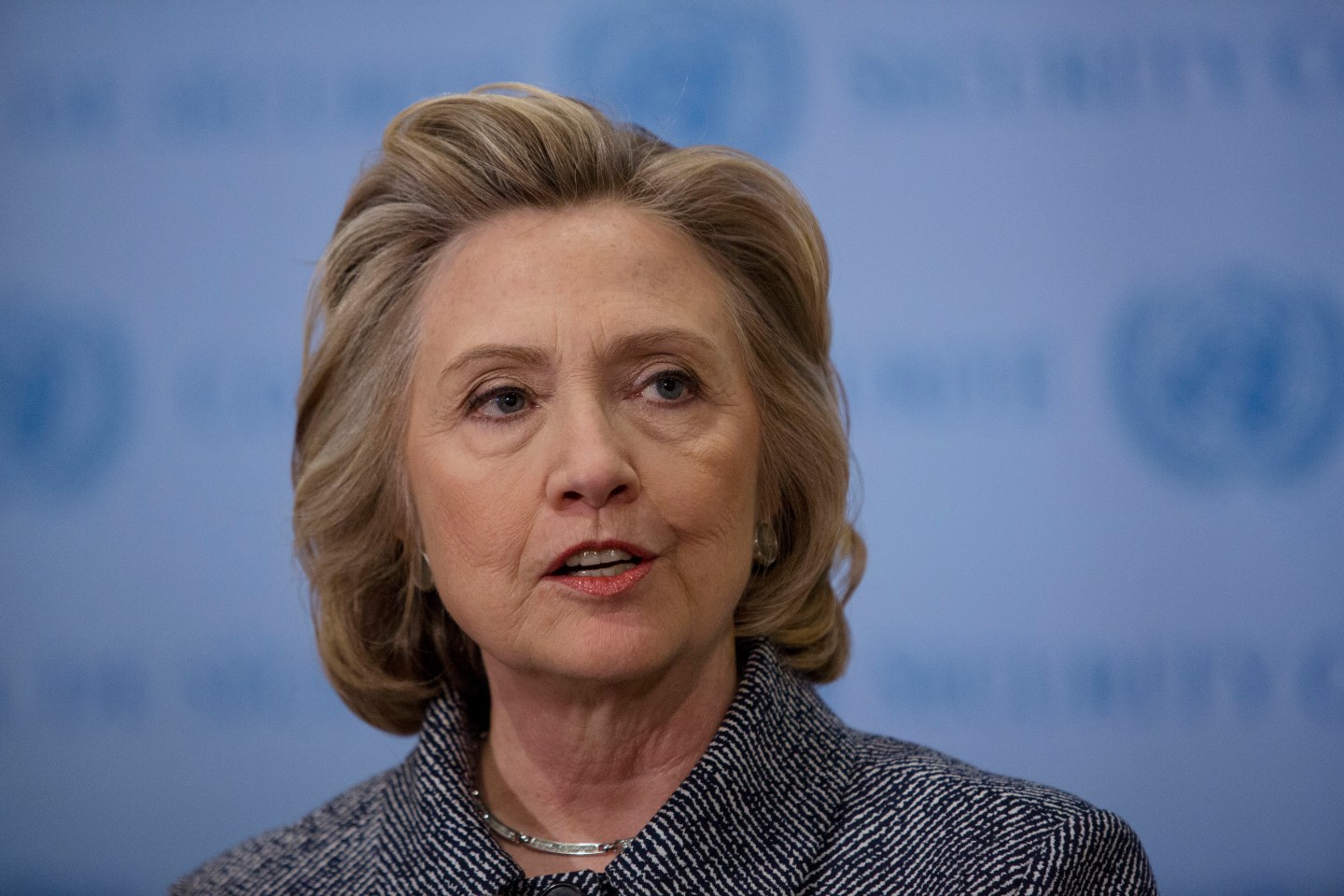 Hillary Clinton abruptly left a 9/11 anniversary ceremony Sunday after feeling “overheated,” according to her campaign. Her doctor said the Democratic presidential nominee was diagnosed on Friday with pneumonia, put on antibiotics and advised to rest and modify her campaign schedule.

Dr. Lisa Bardack says in a statement that Clinton is “recovering nicely” after attending a Sept. 11 anniversary event in lower Manhattan. Clinton was seen on video appearing to struggle to stay on her feet as she got into a vehicle to leave the event.

Bardack says Clinton has been experiencing a cough related to allergies, and in a follow-up examination Friday of her cough, Clinton was diagnosed with pneumonia.

Less than two months from Election Day, it was an unwanted visual for Clinton as she tries to project the strength and vigor needed for one of the world’s most demanding jobs. Republican rival Donald Trump has spent months questioning Clinton’s health, saying she doesn’t have the stamina to be president.

Clinton’s departure from the event was not witnessed by the reporters who travel with her campaign and aides provided no information about why she left or her whereabouts for nearly two hours. Spokesman Nick Merrill eventually said Clinton had gone to her daughter’s nearby apartment, but refused to say whether the former secretary of state had required medical attention.

Clinton exited the apartment on her own shortly before noon. She waved to reporters and said, “I’m feeling great. It’s a beautiful day in New York.”

The video of Clinton posted to social media shows her being held up by aides as a black van pulls up. She stumbles and appears to fall off the curb as she is helped to the vehicle.

After leaving her daughter’s, Clinton was driven to her home in Chappaqua, New York, and made no public appearances. She was scheduled to fly to California Monday morning for fundraising and it was unclear whether her schedule would change.

Trump, who attended the same event marking the 15th anniversary of the 9/11 attacks, was noticeably restrained. Asked by a reporter about Clinton’s health incident, Trump said, “I don’t know anything.”

The incident compounds an already difficult stretch for Clinton as the presidential race enters its final stretch. Despite Trump’s numerous missteps, the race remains close and many Americans view Clinton as dishonest and untrustworthy.

On Friday, Clinton told donors that “half” of rival Donald Trump’s supporters are in a “basket of deplorables” — a comment that drew sharp criticism from Republicans. Clinton later said she regretted applying that description to “half” of Trump’s backers, but stuck by her assertion that the GOP nominee has given a platform to “hateful views and voices.”

Now Clinton is sure to face new questions about whether she’s physically fit for the presidency. Trump and his supporters have been hinting at potential health issues for months, questioning Clinton’s stamina when she takes routine days off the campaign trail and reviving questions about a concussion she sustained in December 2012 after fainting. Her doctor attributed that episode to a stomach virus and dehydration.

Donald Trump Again Claims That He Opposed the Iraq War

Clinton’s doctor reported she is fully recovered from the concussion, which led to temporary double vision and discovery of a blood clot in a vein in the space between her brain and skull. Clinton also has experienced deep vein thrombosis, a clot usually in the leg, and takes the blood thinner Coumadin to prevent new clots.

Clinton spent about 90 minutes at the 9/11 event Sunday, standing alongside numerous other dignitaries, including New York’s Democratic senators, Chuck Schumer and Kirstin Gillibrand. The weather was warm and humid in New York on Sunday, and there was a breeze at the crowded memorial plaza during the ceremony.

Rep. Joe Crowley, D-N.Y., said he spent time before the ceremony chatting with Clinton and watching her sign autographs and take pictures. He said he was standing behind her during the remembrance and “she did not seem out of the ordinary at all.”

“It was stiflingly hot. I was sweating through my shirt,” Crowley said. “I had to leave myself. I drank about a gallon of water.”

Schumer said he also spoke with Clinton during the event and saw her leave “on her own accord.”?

Trump’s personal physician has said the Republican presidential nominee is in excellent health both physically and mentally. But the 70-year-old has refused to release his own health records.

Dr. Harold Bornstein’s report last December remains the only medical information released so far by the Trump campaign. Bornstein told NBC News he needed just five minutes to write a glowing public assessment of Trump’s health as a limousine waited to carry the letter back to Trump.